posted on Sep, 26 2017 @ 07:31 AM
link
It never fails, some idiot somewhere decides to protest something, it grows into a national issue, and as always it turns into a straw man argument about free speech.

Take the NFL kneeling soap opera that is the current example. What is the point of this kneeling? They say it is supposed to bring awareness about police brutality. (You know, because we have the Stasi just murdering people up and down the coast and all throughout the country, but that's for a different thread)

Some inevitably take issue with the protest and criticize it. The defenders come out of the wood works crying "Its their free speech! They can do what they want!"

Yes, yes they can. Just like anyone else is free to bitch, cry, moan, and generally complain about the protest. Just because some take issue with coddled rich boys disrespecting the Country that has given them the opportunity to make millions of dollars by playing a game, doesn't mean those people are in anyway shape or form against free speech.

So the original intent of the protest is one giant fail because all anyone is talking about is Trumps comments, NFL team actions, owners, individual players, and of course the multitude of free speech arguments that pop up.

In general people like sports as a temporary escape from the political ooze that spreads itself into every corner of our society. But we cant let that happen! You must pick a side! Stay divided over the most mundane aspects of your lives.

So, instead of a national debate about police interactions with the community that they are supposed to serve and protect, we are talking about how the founders would be proud that a symbol of the freedom they fought for is being disrespected because police brutality freedom of speech is threatened somehow?

Maybe it's by design. Maybe the right hand is picking your pocket while the left hand is pointing to some doofus on his knees. A patriotic man in one ear shouting he's disrespecting your Country! A rebel in the other ear telling you to rage against the machine!

All the while you just wanted to watch some people smash each other and throw a damn ball around.

My solution? Watch more baseball. It's the best sport anyway.

Just yesterday, the NY Mets' Jose Reyes daughter sang the anthem. Dad brings her some flowers and the whole stadium gets a little misty eyed as the pride of a father touches everyone present.

Or Big Papi taking a baby from the stands and holding it during the anthem. Takes pictures and signs some balls for the fans.

If anyone would have taken a knee it would have ruined that moment for him and his family as well as the fans. It has nothing to do with free speech or police brutality and everything to do with a time and place for everything. Yes you are free to take a knee when you want but that doesn't make it right and no one is attacking your right to do so. They are attacking your lack of judgment and venue you choose to try and engage people in a political discussion.

The above videos are what sports are supposed to be. Something that used to bring us all together. Not a platform for political divide.

You're free to kneel when you want, just be careful that your cause isn't lost in the ensuing storm when you unwisely choose the worst possible venue to fan the flames of division.

posted on Sep, 26 2017 @ 07:36 AM
link
I agree.
The original thought behind the protest has been bastardized by those on both sides of the argument.
Even with all the hoopla surrounding the anthem and kneeling on Sunday, they barely mentioned police brutality.

They haven't yet forgotten it.

The NFL may be in for a rude awakening, and with the all the vapors over how the sport is "too dangerous" despite soccer causing as many head injuries when you break the numbers down, it may never recover.

They (the NFL) screwed up.

Instead of bringing attention to suspected police brutality, they have simply brought attention to themselves.

You want to disrespect the national anthem, the flag, things that symbolize the very essence of what and why I took an oath?

I see it as spitting or burning the flag.

And people who spit on or burn the flag aren't "doing it" because they hate the flag, they might be protesting something entirely different. But all anyone remembers is someone burning or spitting on the flag.

That's what I see. I see the disrespect.

I don't see the issue that they are protesting.

I see a bunch of millionaires spitting on the flag.


Maybe they might get more attention to their cause, their reason for protesting, if they took a different approach.


They are free to do it.

But I have turned my back to them because I don't wish to see it.

posted on Sep, 26 2017 @ 07:51 AM
link
NASCAR is the only sport that GETS IT. You can't put aside your pointless BS protests and be an American for a minuet, maybe you don't need a job at NASCAR.

posted on Sep, 26 2017 @ 07:55 AM
link
a reply to: FauxMulder
In fact, we have done three Ray's games during the summer. I really have started to enjoy baseball more. I live like 5 minutes from the football stadium, I have been to one Buccaneers game ever. The Rays Stadium is like 35 minutes drive across the bay and through annoying downtown St. Pete. I go to a few every year or so. Really wish they would relocate to Tampa though.

posted on Sep, 26 2017 @ 07:59 AM
link
a reply to: FauxMulder
People are complaining about what dudes in silly suits do when a special song plays and I'm over here like: 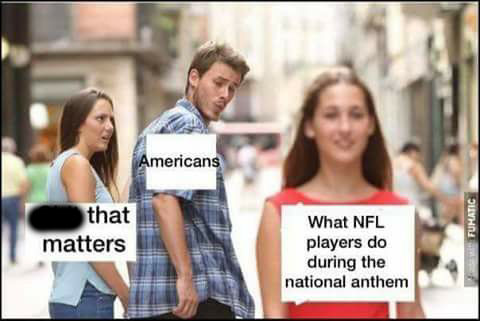 It never fails, some idiot somewhere decides to protest something, it grows into a national issue, and as always it turns into a straw man argument about free speech.


No, thats where idiots take the argument to steer attention away from...

They say it is supposed to bring awareness about police brutality.


That is what the protest is about, period.

But leave it to idiots to pretend they don't get it, or deflect from the real issue to 'kneeling' , Just like you just did.

They are attacking your lack of judgment and venue you choose to try and engage people in a political discussion.


Attacking protest, right. How else , where else the most people will see it? On the News? LOL, they never question authority.

Thus the 'kneeling', protesting police brutality in the most public venue possible, live TV. Why not? You claim that sports is not political, yet every game begins with the national anthem, the flag flies over the stadium and commercial breaks include 'News' updates.

You think if these 'protesters' asked to gat a minute of mic time they would be allowed to?

A whole minute. What a ratings loss.

I agree. My favorite team is the Atlanta Braves. It seems that at almost every home game they are doing something great for the community. They did a program finding some of the best local small business start ups and helping them out, they did a thing with getting some kids from the city playing with the pros, they've done breast cancer awareness and so much more this year.

These are the ways to make a difference in the community. They are always giving back in someway. All of that good goes away the moment they start pissing off a segment of their fans.

I don't really care about finding a better way for them. That's their deal. I just know the way they've gone about this has gotten their original intent lost in the shuffle. Its now about ratings, kneeling, free speech, and disrespect.

I don't really care about finding a better way for them. That's their deal. I just know the way they've gone about this has gotten their original intent lost in the shuffle. Its now about ratings, kneeling, free speech, and disrespect.


You don't care about protest, got it.

I was clarifying that protest is not 'idiotic', the 'idiots' turn it into something else to cover it up, the same way the Establishment 'covers it up'.

At least we have the left understanding the big picture with Freedom of speech. And we did it all without propping up NAZIs. Go team!

How many times can you use protest til it becomes a scapegoat for something more grand? Violence has been ongoing in U.S.A for as long as the NFL has been around. What is the difference from then, til now? I honestly believe its a societal trend, and yes ratings are involved. Sorry to say, but someone who has never put a knee down before and all of a sudden wants to be a poster boy is hypocritical. Things are changing, and they sure did a good job of Hijacking the NFL to use it as a vehicle to push some sort of agenda.

Maybe they might get more attention to their cause, their reason for protesting, if they took a different approach.


I guess they never thought to go to Baltimore and stand in the streets during those protests while CVS pharmacies and liquor stores are looted and burned around them.
That's how you protest for reals.
Unless you be a pussy.

How many times can you use protest til it becomes a scapegoat for something more grand? Violence has been ongoing in U.S.A for as long as the NFL has been around.


Its not about "violence" in general, specifically its about police brutality. Particularly the impunity police, who get away with anything, these days.

These days the frog pond temperature is becoming uncomfortable. But who cares, the game is on!

originally posted by: FauxMulder
So the original intent of the protest is one giant fail because all anyone is talking about is Trumps comments, NFL team actions, owners, individual players, and of course the multitude of free speech arguments that pop up.


This is generally the fate of every modern protest.

When there isn't "tactics and destruction" going on, the discussion of the protest quickly peters out into obscurity because there's no dramatic images. We have become a nation of only focusing on the drama and not about the real issue at hand.

Enough of that--the point is that there is no longer and true critical thinking that happens en masse anymore, so everyone just defaults to the most dramatic way to discuss any topic, and drama always divides because we've become a people of having to choose a side.

This drama leads to division, division leads to extremists, extremists lead to protests with "tactics and destruction," and then we're back at square one only discussing the drama, creating more division, and more extremists.

We have created our own perpetual-motion machine, and it's eventually going to destroy us. "Original intent" is a thing that no longer matters when it comes to anything that can be dramatized and divided.

When Rodney King was brutally beaten by the white man, did you see anyone in the NFL kneel during the national anthem? How about the Watts riot?


The riots were the protest.

We are talking about at sports venues such as the NFL. Since this seems to be the issue at hand.