The need for a new tanker


The KC-46 is said in this article to seriously hamper new stealth platforms. With risks to coatings and radio chatter

So as many here, myself included have pondred why have all these amazing stealth platforms if all you have to do is watch the tankers or target the tankers themselves to find a chink in the proverbial armor.

So does this mean that there is something else flying in the LRSB family along the lines of a tanker to help maintain the family's stealth shield.

if it isn't already flying, it obviously on someone's mind


i personally think there is already a solution to this, just makes sense. if you know the roundabout range of aircraft, then you could guess where the tankers might be and if they aren't stealth like the attack aircraft what's the point.


put AWACS and some subs at those points and just take the tankers out, like the saying goes NOKAWTG.
edit on 25-9-2017 by penroc3 because: (no reason given)

Some of our penetrators have much longer range than disclosed.

You either produce big planes that carry all the fuel they could possibly need, or provide tankers. As the former is unfeasible, the latter is reality. I suppose you could build stealth tankers, but then it all starts to become unaffordable.

No One Kicks Ass Without Tanker Gas.

They still don't know that it WILL affect stealth platforms. They haven't refueled one yet to find out. All they know right now is that preliminary data shows the boom impacts the receiver outside the slipway more often than with current tankers. They don't know to what extent it damages the stealth coating, or much beyond that.

it seems like allot of money was put into these contracts, how could they not consider these upcoming or current platforms for these new contracts, they knew the risks i would assume from the B-2 or F-22 or F-35 etc.


if i were going to make a family of systems, i would make sure they could get their gas without any major issues.

“We still have a significant amount of work in front of us to complete certification testing and other activities. It’s a day-by-day process to meet certification requirements,”Hutcheson said.

and what are the special pods they are talking about? i thought that was a Navy thing. i can't imagine new platforms using them as it would seem more likely to bump into and damage the skin/coatings.

Since it was built as a new 767 and converted to a tanker, the FAA has to certify the aircraft and give them an airworthiness certificate. If it had been built on an existing 767, they wouldn't have had to go through that process. They're about 60% through the process IIRC.

The pods are drogue pods. Without them they can't refuel Navy or NATO aircraft. Not everything uses a boom receptacle, so they have to have a drogue. If they use the drogue that attaches to the boom, they can't refuel anything with the boom, and can only refuel Navy and NATO aircraft. If they have the centerline drogue, they can only refuel one at a time. By having the wing pods they can refuel up to three at a time.

As for stealth aircraft, they're going to be refueling outside the threat area so they will be getting their fuel safely. The boom scraping is a fairly easy issue to resolve I'll bet. Some software adjustment, and the new cameras will probably resolve it.
edit on 9/26/2017 by Zaphod58 because: (no reason given)

I figured it was a Navy thing, the way they worded i sounded a little strange i guess when i was reading it.

and i agree that most of the time the tankers will be in uncontested airspace, but if we were facing a more peer level threat they would be able to track the tankers and by the fact they seem like the weak link in the chain, take the tankers out then there are no bombers or fighters to worry about.

i don't disagree that we should have a regular new tanker fleet, but is it possible there is something out there that could fly in close to or, in contested airspace to help fuel bombers and tankers.

Ah but we do have S that kicks ass without tanker gas. Its not 1995 anymore. There have been developments.

But it's not an old, well established platform. The basic airframe is a 767, but it has a cargo door, specialized cargo moving floor, no under floor cargo capacity, triple redundancy wiring, digital architecture, and a 787 cockpit.

The problem, even with a near peer opponent is that they're going to be several hundred miles out when they tank. The F-35A has a combat radius near 500 miles. Even if they have an over the horizon radar, and see the tanker, that's a lot of airspace they can still use to head in.

True it's a new airframe, but the tech other than the in the cockpit isn't that new, i mean there can only be so many ways to skin a cat it would seem.

im not to familiar with tanker tech. but i would assume other than the LIDAR and cameras/nv it's pretty simple. pressurize the fuel and send it down the boom. fly straight(easier said than done).

the whole drogue and pod set up seems way more risky, granted i have seen a few videos with some serious pucker factor with how close they got using the boom.

i understand it is a new airframe and new parts are going to have to be made to fit it, but it's still the same mission.

posted on Sep, 26 2017 @ 08:06 AM
link
I'm pretty sure the intent is to have the B-21 refueled a long distance away from the adversary where it cannot shoot down or even detect the tanker, though I'm not sure if this would work if it's a really long strike mission such as flying into central asia. Perhaps using Google maps, known military installations and estimated B-21 range we could figure this out (no wonder the B-21 is classified!). Perhaps the tanker could also blend into normal airliner traffic, but this has its own issues.

With that said, I think a stealthy way of extending the range of tactical fighters or smaller aircraft on special missions has a very clear need. Pretty much all tactical fighters have a range which is too short for the west pacific. I'm thinking of something more like a bigger land-based MQ-25 Stingray, but then there's the question of how do you actually make the refueling system stealthy, which is probably harder if none of your aircraft are capable of accepting drogue and hose equipment (though the F-35A can be modified to accept this).

Not sure about the boom scraping issue, but the HF issue sounds like it could be closed out after further analysis and testing, potentially with no modifications or only with small modifications to ensure that EMCON modes work correctly.

Yes, but that doesn't mean there's no risk when you're improving the tech. It's an upgraded boom, and virtual boom station from previously. That means there's going to be some issues during development.

Right now, the biggest slow point is the FAA. The military side is largely resolved, besides the scraping issue. The HF and extension concerns simply need a couple verification tests and they can be closed out.

As a pilot, I definitely preferred me being in charge of linking these 2 aircraft together. The idea of having someone else fly the boom into my aircraft gives me shivers.

Sometimes it's better to receive, than give. 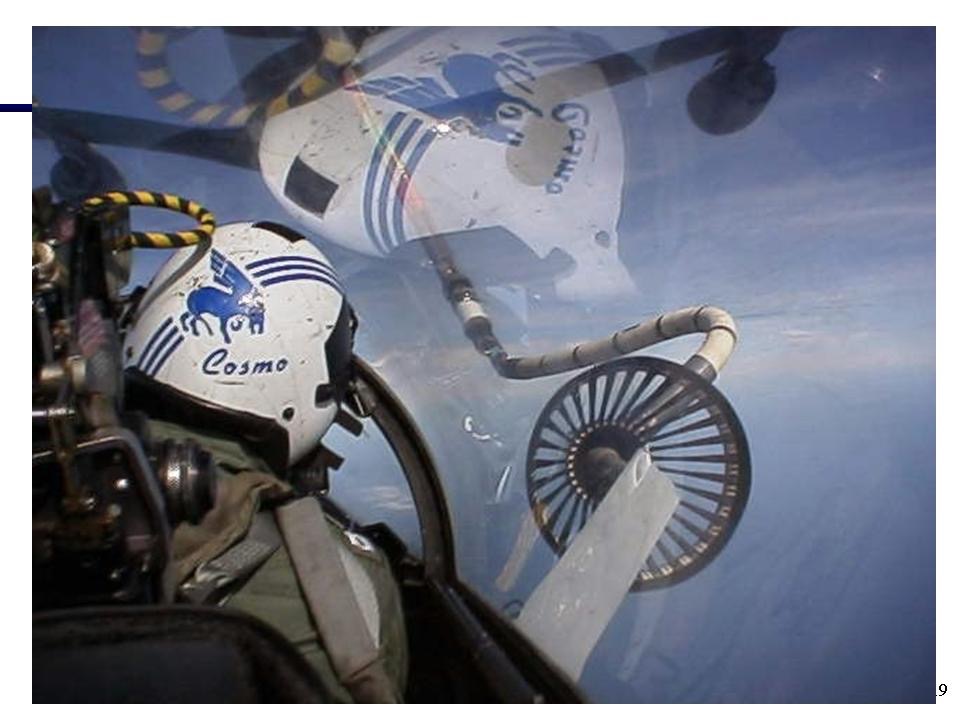 The HF and extension issue are just a matter of verification now. They're still studying the scrape issue but Boeing is planning to replace the cameras to get better vision and go from there.

with the new robot drone technology,
why not use that? in the air craft to be fueled?

a good idea. I think so.
dont use one refuel aircraft. and in the same place.
if some thing goes wrong you only lose one.
or if enemy air craft/ missiles shoot at them.

I would even use fake ones that can been seen.