Hillary Clinton: Women Are ‘Publicly Disrespecting Themselves’ by Supporting Trump

This time on MSNBC with Joy Reid on AM Joy.

She makes a statement that alienates about 1/2 to 3/4 of American Women !!

She's also very "troubled" about the Trump rally chants that say "Lock Her Up".

See the video in the article where she's oh-so stern and serious !!

Never hurts to get half the population pissed off at you Hillary. Keep up the good work

Hillary Clinton: Women Are ‘Publicly Disrespecting Themselves’ by Supporting Trump

Hillary Clinton said on MSNBC Saturday that women who support President Trump are “publicly disrespecting themselves.”

“When I see women doing that, I think, ‘Why are they publicly disrespecting themselves? Why are they opening the door to have someone say that about them in their workplace, in a community setting? Do they not see the connection there?'” Clinton told MSNBC’s Joy Reid on AM Joy.

Clinton commented about the Trump-supporting women after Reid asked her about pro-Trump women wearing shirts with profanities directed at Clinton.

The former 2016 presidential candidate added that she thought it was “troubling” to hear about people chanting, “Lock her up” at Trump campaign rallies. 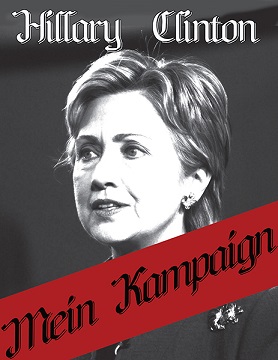 Problem solved right? Blame the OP for bringing it to your attention.


(I didn't watch it either)

And she knows a lot about being disrespected by the public eye. Better listen to her..

Well, Hillary is consistent in not only blaming anyone but herself for her failures (extreme narcissist) but also in non-stop projection of HER issues onto others.

Hillary's the one who's "publicly disrespecting" women when she attacks those women raped by Bill.

What part of a woman/womanhood is Hillary referring to?

What part of a woman/womanhood is Hillary referring to?


Obviously the part that supports Trump instead of encouraging her psychosis

My gods, she's not doing a book tour, it's a bridge burning tour!

Someone, PLEASE activate a stargate and send her back to planet Hemorrhoid! It's missing a queen!

ZenTam
+1 more
posted on Sep, 23 2017 @ 09:43 PM
link
I wish she would shut up and disappear. There's many reasons I don't like Hillary Clinton but the main one is that she stayed with that lying, man whore Bill Clinton. He has been cheating on her since the moment they got together and the world knows it. We also know she helped to cover up his MANY indiscretions and also to discredit and destroy the lives of the women who accused him of rape. The Clinton Foundation also excepted millions of dollars from countries who treat their woman and young girls like property. They care for and treat their livestock better than their woman. Woman have no education, say, rights or protection in these countries. You Hillary are a horrid example to your daughter and to woman around the world. Please do not ever speak or fight for me.

posted on Sep, 23 2017 @ 09:45 PM
link
Hillary is the most messed up woman in the world. She is calling anyone who did not vote for her a traitor to women kind. If she was a good honest woman who was mostly sane, I could see it. She is using Ad Hominem techniques to intimidate people who did not vote for her. I think she is a bit of a psychopath myself. I hate people who use the saying "you are either with me or against me"

originally posted by: rickymouse
If she was a good honest woman who was mostly sane, I could see it.

If she was a good honest woman she'd be the president right now.


originally posted by: rickymouse
If she was a good honest woman who was mostly sane, I could see it.

If she was a good honest woman she'd be the president right now.

If she was even as good and honest as the standard politician, she'd be president right now. That tells you quite a bit.

posted on Sep, 23 2017 @ 10:03 PM
link
she's not wrong. unfortunately, some women have been raised and lived all their lives not expecting any better from the men around them, so it probably doesn't seem that weird to them.

originally posted by: fiverx313
she's not wrong. unfortunately, some women have been raised and lived all their lives not expecting any better from the men around them, so it probably doesn't seem that weird to them.

That seems weird coming from a woman who married, is still married to a man who serially cheats on her (the height of disrespecting his woman), sexually harasses some of those other women and may have indulged in a little rape while he was at it.

But sure, she has all kinds of ground to go around lecturing other women about the respect we should be expecting from our men.