posted on Sep, 18 2017 @ 09:41 AM
link
Kryptos is a sculpture located at the Central Intelligence Agencies headquarters in Langley Virginia. 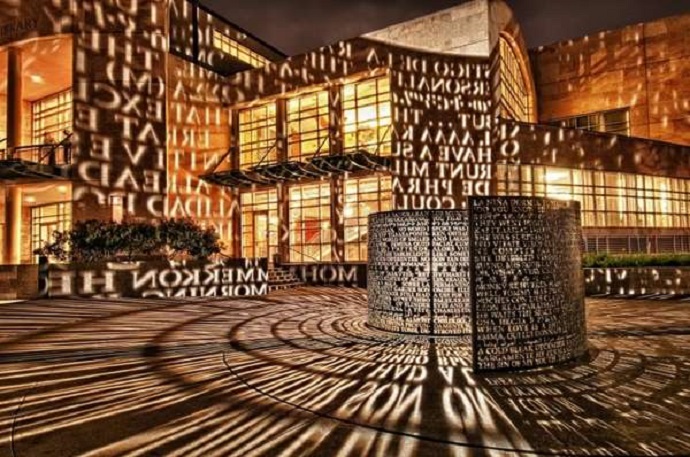 It was dedicated on November 3, 1990. Kryptos was created by artist Jim Sanborn

Sanborn's ambitious work includes the 9-foot 11-inch-high main sculpture—an S-shaped wave of copper with cut-out letters, anchored by an 11-foot column of petrified wood—and huge pieces of granite abutting a low fountain. And although most of the installation resides in a space near the CIA cafeteria, where analysts and spies can enjoy it when they eat outside, Kryptos extends beyond the courtyard to the other side of the new building. There, copper plates near the entrance bear snippets of Morse code, and a naturally magnetized lodestone sits by a compass rose etched in granite. 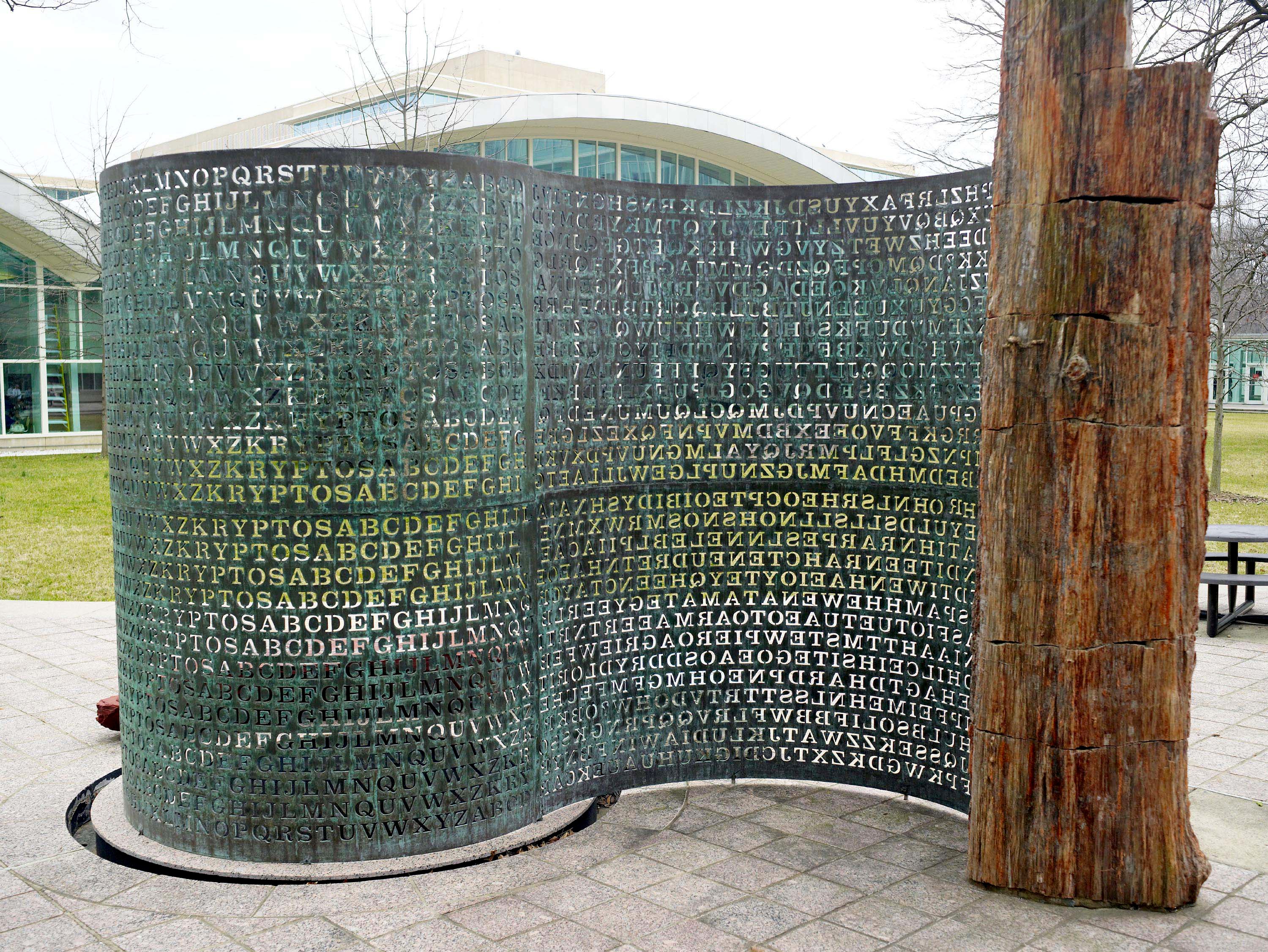 Jim Sanborn had very little knowledge in cryptography so he reluctantly accepted the CIA's offer of help from a retiring employee named Ed Scheidt. Ed was the Chairman of the CIA's Office of Communications.


"I was reminded of my need to preserve the agency's secrets," Scheidt says. "You know, don't tell him the current way of doing business. And don't create something that you cannot break—but at the same time, make it something that will last a while."

And last a while, it has. There are 4 sections, named K1, K2, K3, & K4 by amateur and professional cryptographers alike. Jim has said that it is a riddle within a riddle that will only reveal itself after all 4 sections are solved. 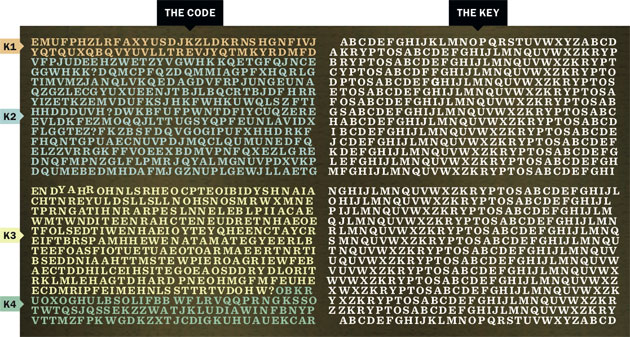 The first three sections were cracked in 7 years. Sanborn himself thought the entire thing would have been cracked within a few months.

The first code breaker, a CIA employee named David Stein, spent 400 hours working by hand on his own time. Stein, who described the emergence of the first passage as a religious experience, revealed his partial solution to a packed auditorium at Langley in February 1998. But not a word was leaked to the press. Sixteen months later, Jim Gillogly, an LA-area cryptanalyst used a Pentium II computer and some custom software to crack the same three sections. When news of Gillogly's success broke, the CIA publicized Stein's earlier crack.

K1 Solution: BETWEEN SUBTLE SHADING AND THE ABSENCE OF LIGHT LIES THE NUANCE OF IQLUSION

K2 Solution: IT WAS TOTALLY INVISIBLE HOWS THAT POSSIBLE ? THEY USED THE EARTHS MAGNETIC FIELD X THE INFORMATION WAS GATHERED AND TRANSMITTED UNDERGRUUND TO AN UNKNOWN LOCATION X DOES LANGLEY KNOW ABOUT THIS ? THEY SHOULD ITS BURIED OUT THERE SOMEWHERE X WHO KNOWS THE EXACT LOCATION ? ONLY WW THIS WAS HIS LAST MESSAGE X THIRTY EIGHT DEGREES FIFTY SEVEN MINUTES SIX POINT FIVE SECONDS NORTH SEVENTY SEVEN DEGREES EIGHT MINUTES FORTY FOUR SECONDS WEST X LAYER TWO

K3 Solution: SLOWLY DESPARATLY SLOWLY THE REMAINS OF PASSAGE DEBRIS THAT ENCUMBERED THE LOWER PART OF THE DOORWAY WAS REMOVED WITH TREMBLING HANDS I MADE A TINY BREACH IN THE UPPER LEFT HAND CORNER AND THEN WIDENING THE HOLE A LITTLE I INSERTED THE CANDLE AND PEERED IN THE HOT AIR ESCAPING FROM THE CHAMBER CAUSED THE FLAME TO FLICKER BUT PRESENTLY DETAILS OF THE ROOM WITHIN EMERGED FROM THE MIST X CAN YOU SEE ANYTHING Q ?

There are intentional misspelled words. Some think these are clues to solving K4. The coordinates listed in K2 are for a spot about 150 feet away from Kryptos. It has been revealed that the "WW" in K2 is for William Webster, the CIA director at the time. Jim Sanborn has confirmed this himself. Though he says the director was never given the entire answer.

But Sanborn also claims that the envelope he gave Webster didn't contain the complete answer. "Nobody has it all," he says. "I tricked them."

Even the NSA has gotten in on the fun.

The NSA also claimed that some of their employees had solved the same three passages, but would not reveal names or dates until March 2000, when it was learned that an NSA team led by Ken Miller, along with Dennis McDaniels and two other unnamed individuals, had solved passages 1–3 in late 1992.

In 2013, in response to a Freedom of Information Act request by Elonka Dunin, the NSA released documents which show the NSA became involved in attempts to solve the Kryptos puzzle in 1992, following a challenge by Bill Studeman, then Deputy Director of the CIA. The documents show that by June 1993, a small group of NSA cryptanalysts had succeeded in solving the first three passages of the sculpture

It seems the NSA was able to crack the first three sections relatively quickly.

But even if someone manages to crack K4, that wont be the end.

If anyone manages to solve the last cipher, that won't end the hunt for the ultimate truth about Kryptos. "There may be more to the puzzle than what you see," Scheidt says. "Just because you broke it doesn't mean you have the answer."

All of this leads one to ask: Is there a solution? Sanborn insists there is—but he would be just as happy if no one ever discovered it.

He has already alluded to what it is all about.

Kryptos subversively embodies the nature of the CIA itself—and serves as a reminder of why secrecy and subterfuge so fascinate us. "The whole thing is about the power of secrecy,"

A CIA or NSA employee has probably already solved it but they have yet to make those findings public. Just like they solved the first three sections but never made the info public until a civilian cracked it. I think it would be cool if someone solved it but then again, as Sanborn has said: "Once an artwork loses its mystery, it's lost a lot."

Get to cracking ATS

Probably just a secret recruiting tool. If you can crack it, your in.

originally posted by: Antipathy17
Probably just a secret recruiting tool. If you can crack it, your in.

A sculpture that takes decades to decipher all to recruit one person? Seems just a tad inefficient.

Every bit of encryption doubles the amount of time it takes to decode. At some point, there's not enough time in the Universe to crack the encryption. The people doing the spying are going to lose at some point.

Algorithms don't keep you safe. Assume your enemy knows your algorithms. How you manage your keys is what keeps you safe.

It's probably inverse semantics based on insolvability.

Sorry, I've had way too much tin foil this morning.


I didn't have the heart to tell him that we Masons already know the answer.

Without getting into too much detail it's the spook equivalent of 'drink your Ovaltine'.

That would be the worlds most epic troll

Guess how they stay immortal?

Hint: The fountain of youth is running through the veins of young uncontaminated children.

What are the odds the sculpture would be that height? I mean really...

Coincidence? I think not!

What are the odds the sculpture would be that height? I mean really...

Coincidence? I think not!

Hint: The fountain of youth is running through the veins of young uncontaminated children.

Have you ever seen AM's garden? It's right by the basement entrance 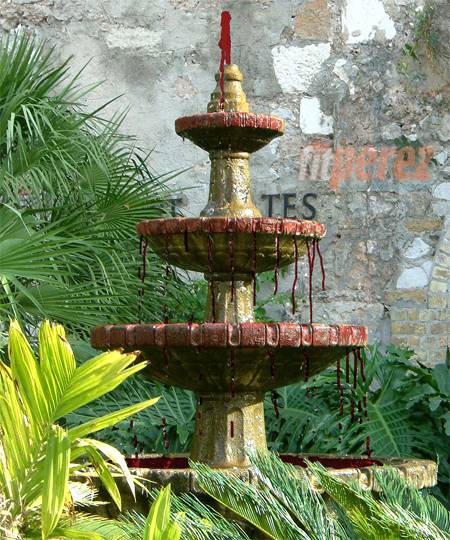 *runs away with camera in hand*

I figured that one passage in k3 was pyramid related.

Berlin clock? Reminds me of the seymour tall case clock xuenhen posted about a few months ago, which happens to be exactly 1 foot 1 inch shorter than the 9'11" Kryptos sculpture.

That aside, could be about a water clock. Maybe thats what the great pyramid was 😐

Clock of flowing time in berlin.. 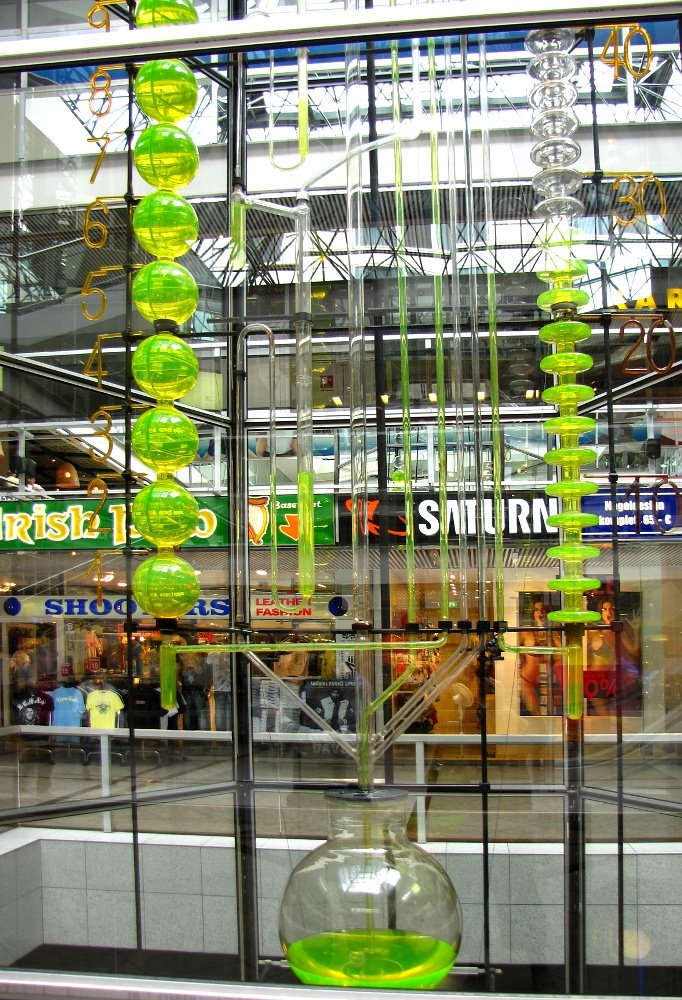