The Mystery Of The Miniature Edinburgh Coffins.

In a secluded spot on the north-east side of the hill, the boys discovered a small cave in the rock, hidden behind three pointed slabs of slate. Concealed within were 17 miniature coffins.

Eight of these coffins survive to the present day, and are on display in the National Museum of Scotland. Few objects in our collection excite as much intrigue. Who made the intricate carved figures? Who did they represent? Who placed them in their secret sepulchre… and why?" 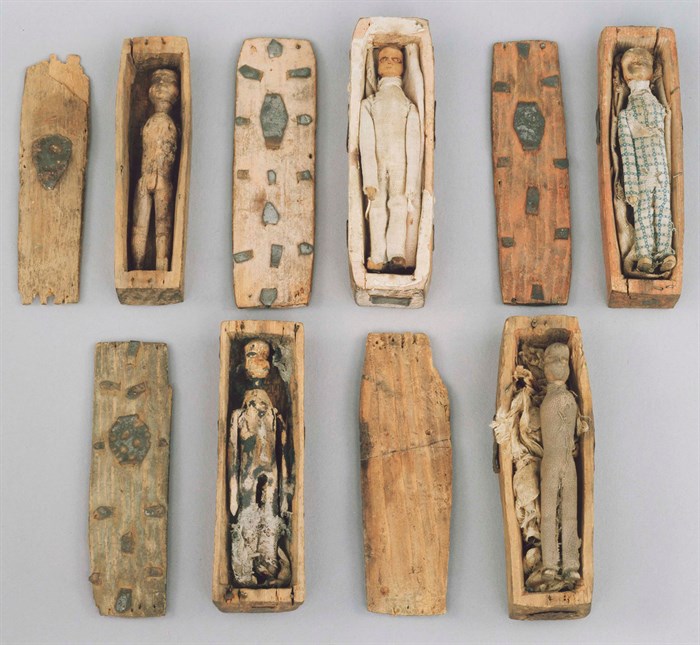 There's an interesting exhibition on at the Edinburgh National Museum about these weird little coffins that were found. The full article is here:

But I'll paraphrase it to save folks the click.


The tiny coffins were arranged under slates in three tiers: two tiers of eight and one solitary coffin on the top. Each coffin, only 95mm in length, contained a little wooden figure, expertly carved and dressed in custom-made clothes that had been stitched and glued around them.


What were they doing there? The newspapers of the time fell on the story, and each had a different theory.

‘Satanic spell-manufactory!’ cried The Scotsman, the first paper to report the tale, in an article published on 16 July 1836:

“ Our own opinion would be – had we not some years ago abjured witchcraft and demonology – that there are still some of the weird sisters hovering about Mushat’s Cairn [sic] or the Windy Gowl, who retain their ancient power to work the spells of death by entombing the likenesses of those they wish to destroy.

“ An ancient custom which prevailed in Saxony, of burying in effigy departed friends who had died in a distant land.

The Caledonian Mercury added that:

“ We have also heard of another superstition which exists among some sailors in this country, that they enjoined their wives on parting to give them “Christian burial” in an effigy if they happened [to be lost at sea].

Yet if this is the case, why so many similar coffins? Nobody had any answers.


After this initial flurry of media interest, the coffins passed into the hands of private collectors, reappearing in 1901, when eight were donated to the Museum of the Society of Antiquaries of Scotland, and from there to National Museums Scotland. What happened to the remaining nine? The Scotsman tells us that ‘a number’ were destroyed by the boys, although we don’t know how many – certainly no more have come to light since.

On surveying the evidence from The Scotsman, Edinburgh Evening Post and Caledonian Mercury, cuttings from which were donated with the coffins, the Society concluded that ‘the intention [of the coffins] seems to be to symbolise honorific burial’.

But the mystery has not been allowed to rest there.

Five years later, in 1906, The Scotsman published another bizarre story about the coffins. A ‘lady residing in Edinburgh’ had told the paper that her father (‘Mr B.’) had sometimes been visited at his business premises by a ‘daft man’. On one occasion, the man had drawn on a piece of paper a picture of three small coffins, with the dates 1837, 1838 and 1840 written underneath.

‘In the autumn of 1837,’ The Scotsman explains, ‘a near relative of Mr B’s died; in the following year a cousin died and in 1840 his own brother died. After the funeral, the daft deaf mute appeared again, walked into Mr B’s office and “glowering” at him vanished never to return.’

‘Is it not just possible,’ the article goes on to ask, that this man was the maker of the Arthur’s Seat coffins, ‘driven mad by the loss of his treasures’? Or was the whole story ‘nothing but coincidences’?

A weird twist to the tale indeed.


The rest of the article provides some more speculation and historical perspective, worth a read if you've managed this far and are still interested. But nobody really knows.

Growing up as a little boy in Edinburgh I remember lots of stories about these figures, everybody claimed to know somebody whose grandfather had one up on a shelf, and they were magical/cursed/etc. Because it does make you wonder where the rest of them are. I don't believe the boys destroyed them, because they would have been potentially valuable. Kids don't just destroy treasure.

posted on Sep, 18 2017 @ 08:09 AM
link
Thats interesting how long have these been on display there, I often goto the national museum just to look at the exhibits
and ive never seen these in there!

Hard to add anything considering that we can only speculate based on the bit we know.

Very interesting to me though, and thanks for another great thread. Easy S&F.

Thank you for sharing this very mysterious story.

When it comes to things like this, I always wonder--could they not be the results of apprentices learning the skill of woodworking, and these were miniature practice coffins that, after making them, they decided to dress the figures and bury them, possibly even as a joke.

When I was in my sculpture classes, my instructor absolutely had the sense of humor to have the class do something like this, just to confuse anyone in the future who may dig them up.

I assume that they probably weren't as wasteful with their materials and products and time back then, but you never know...


It would be just typical if such a mysterious set of artefacts had such a mundane rationale as 'joke by apprentice carpenters' wouldn't it.

Though one assumes they were as you say quite substantial investments of time and materials and money, it seems... unlikely they'd just dump them unless that act of dumping has some sort of significance.

There's been quite a few odd things found up on Arthur's Seat over the years, I wonder if anybody has ever made a compendium of all of them.

posted on Sep, 18 2017 @ 09:11 AM
link
Probably children training aids. Familiarizing them with death. During the plague lots of people died, what better way to help explain it, gently like, to young impressionable minds, than with 'dolls' ?

people only bury things usually to hide them for safe keeping , or as a memorial through some sort of ritual

they dont look valuable in terms of the materials , so therefore Id lean towards them being ritual of some sort.

The fisherman theory seems to be the best , but how creepy if they are some sort of witchcraft doll.

These may have been his way of immortalizing his collection.

Interesting all the same.

Took the words from my mouth Sir. Apprentices have long made miniature furniture and window frames to show skill and practice accurate mitres and mortice joints.

I can't see the coffins clearly on my handset. Am I right in saying the coffins aren't so special to look at? Humdrum even. They'll be amateur hobbyist over aspiring Master Carpenter.

Now a thought hits me. Would there have been any deaths at the time? Symbolic figurines to represent deaths in an extended family. Cholera deaths in the nearest area.

lol wooden figures and clockwork dolls were very popular back then. They look a lot like the "clockwork monk"(I think) from the same time period.

There likely were NEVER any satanic cults..

If you believe in Christianity you do not fight for the side that is offering eternal damnation lol.

It was likely just a scare tactic to keep the sheep (peasants) from rebeling.

posted on Sep, 18 2017 @ 10:54 AM
link
Very interesting. They certainly have the look of what we would consider effigies, but that doesn't mean thats what they are.

Facinating! Thank you for bringing this to our attention!


found this video on them.

Much better than a scotty or a shoe.

Kids do the darndest things. In this case coffins, and funeral rights.

Do you not think they would have been better buried though? The records don't state clearly how well concealed they were, other than under three slabs of rock, but they were clearly in a part of the hill that was accessible to children. And the kids obviously saw something suspicious looking about the rocks. So it seems likely they would have been found by somebody.

So why not bury them on consecrated ground?

I don't know. Fun to speculate though eh.