Stephen King and his opinion on Trump golf ball tweet

So King Tweets this:

Now this is coming from a guy that writes books about children being killed and children that become killers....

How weird is this? In what world is what Trump tweeted even close to what King actually thinks and writes about? I mean, his books....he has to think about children dying, how they die and them being killers and how they kill....but a golf ball to Hillary's back is "f'ed up?

Are these people insane?
edit on Mon Sep 18 2017 by DontTreadOnMe because: unembedded image Mod Note: Do Not Evade the Automatic Censors

posted on Sep, 18 2017 @ 02:10 AM
link
Ill admit this is strange and a ludicrous teeet. I mean, has anyone here read Under the Dome? A guy repeatedly has sex with a corpse kept in his closet...

Reminds me of the time when Jim Carrey fantasizes killing Trump with a golf club:

cosmickat
+7 more
posted on Sep, 18 2017 @ 02:35 AM
link
King = author of fiction, creator of dark humour, composer of horror fantasy for the purpose of entertainment

originally posted by: SudoNim
a reply to: Vasa Croe

the owlbear
+3 more
posted on Sep, 18 2017 @ 02:37 AM
link
Seems like a justified rebuttal to Trump's tweeterverse where he sees himself as a bronzed god but is in essence the world's biggest bloated hypocrite.

What King writes about is fiction.
What Trump tweets about is his hypocritical opinions on a broad variety of topics, from golfing presidents to birth certificates to theater people who don't respect good men (boo).
He comes off sounding like a gilded People of Walmart advertisement.
And don't forget he has new hats for sale...
Even though you're really not supposed to use public office as a sales pitch...
edit on 18-9-2017 by the owlbear because: (no reason given)

Trump is just playing up and he knows his supporters love it. Stephen knows this, too. Stephen just hates Trump because Stephen is a liberal and Trump is trumping his values; ie, winning the game of golf.

Strangely, I can't read his novels, yet I love some of the movie adaptations. I am a reader, too. "Secret Window" and "In the Mouth of Madness" are my favourites.

These well off liberals seem to really dislike Trump. I am bored with their whining and baying. Shut up will you. They are like irritating noisy dogs barking in the night. Borringgggggggg!

Go write another novel. Stephen. Do what you are good at. You sure as hell know nothing about politics other than what will help you maintain your cozy privilege.

Are you suggesting that fiction writing and writing about reality have merged? Is this some kind of McMandela thing?

If we took the advice of people around the age of 20 or so its likely we would all be dead by now, luckily adults are still sort of in charge.......


The Stand, that's the other one. The book, not the mini series with the guy who played Dobber in Coach.
edit on 18-9-2017 by PlasticWizard because: (no reason given)

originally posted by: PlasticWizard
a reply to: Vasa Croe

The Stand, that's the other one. The book, not the mini series with the guy who played Dobber in Coach.

originally posted by: hopenotfeariswhatweneed
a reply to: Revolution9

If we took the advice of people around the age of 20 or so its likely we would all be dead by now, luckily adults are still sort of in charge.......


You are not making sense?

Are yo implying I am only 20 or Stephen King is only 20? Neither of us are 20. We are both adults. Stephen is just much better at writing than politics, that's all.

My gripe with the liberals is that they are entertaining VERY extreme ideologies. They are not fit for power as they will bring great harm to us socially.

Only just now Scout Schultz has been shot dead by police for being crazy. This is a very poignant example of current liberalism. It is the enemy of its own people. It just makes one mess after another. It is filling young people's minds with extremism that is making them do stuff they may get killed for by the authorities. If you walk towards American policemen with a weapon and say go ahead shoot, well they will shoot you, that's policy.This is what liberalism is. I told you earlier as it stands it is a wrecking ball to civilization. Be warned!

President Trump doesn't give a hoot about people like me. Yet there are wider implications to consider. That is why I am sort of realizing that he is a necessary ingredient in the mix right now.


I must be confusing you with someone else, I pretty much agree with everything you are saying here....oops....

King does not write a passage involving murder and violence, sociopathic rage, torment of the body and soul, and then think "Comedy Gold! Lets have a light hearted laugh a the victims expense!".

He knows that what he is writing is dark, dark material, meant to be the shadow cast on the wall, which both intrigues and terrifies the mind, an exploration of the sickest, most twisted part of the id, both his own and the id of his readership.

When he writes of murder, death, the depraved behaviours of monsters, villains and the mentally disturbed, he does not do so from the perspective of thinking that these passages ought to be read out at a comedy festival. He knows that the material is dark and has a very specific effect. He is an explorer of the darker places in the human mind, and knows how to get a response from the reader commensurate with that.

When Stephen King says "Well, thats just not funny." he is not being a hypocrite, because his writings are not comedic. When he writes something dark, its because he meant to, because that is way he wants his audience to be affected by the passage of material they are reading at the time. When Trump writes something about knocking people unconscious with a golf ball, he is not doing so from a position of being a bard of the modern age, not telling a story, or moving a plot forward with a horrific event. He is talking there, about how he thinks, what he personally would find amusing. There is a difference, a massive one, between an artist and a writer of stories, creating a dark, oppressive, evil atmosphere in a work for the purposes of awakening a response in the reader, and a disgusting, spoiled brat of a windbag, sneeringly suggesting that it would be funny to cause harm to someone in pursuit of a hole in one.

originally posted by: hopenotfeariswhatweneed
a reply to: Revolution9


I must be confusing you with someone else, I pretty much agree with everything you are saying here....oops....


Lol, that's ok. I am a very liberal person in many ways, but I can't condone what "they" are spamming us with socially and politically right now. A shame. I think they need to be smashed to pieces ideologically then they may recover from the ashes with a more realistic and less extreme ideology.

posted on Sep, 18 2017 @ 05:03 AM
link
It is much more fun to dress up as a cute loveable childs mascot, say Barney the dinosaur with a horror twist. Too shoot a scene where your character caves a womans head in with a golf club and licks her soufflé brains of the putter. Finishing off with a nice jovial dance scene with some juggling of golf balls. 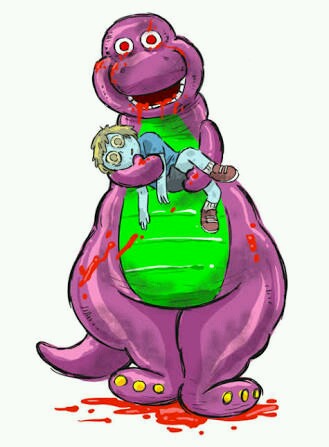 In all seriousness one is a President one a horror novelist. Therefore diffrent expectations of displayed imagination and humor are expected by society.
edit on 18-9-2017 by aliensanonymous because: (no reason given)

funny how people are defending king, not realizing that people getting hurt accidentally is funny to many people. hell one of the longest running shows on tv is AFV (America's Funniest Home Videos) has been on almost 30yrs. it regularly shows people getting hit with something. hell i know that i've seen videos of kids hitting their dads and other people in the nuts with golf balls on that show.

for some reason people think it's funny when people get hurt accidentally.


king has to sit and think up twisted sick sh@@ up. in other words he has to dwell on it for a little while to write stuff he thinks others will enjoy for a living, just imagine his fantasies.
edit on 18-9-2017 by hounddoghowlie because: (no reason given)

originally posted by: SudoNim
a reply to: Vasa Croe


I believe Stephen King thinks of things that are scary and horrific and our messed up society pays him for it. I'm guilty of it, I love his books. But I don't give a crap about his opinion of politics at all. And neither should anyone else.

And as much as I despise Clinton and think the video is hilarious, I think our president could find more productive and professional things to do with his time than retweet stupid internet videos.

Is that some sort of coded redundancy to let the reader know he was speaking out of both sides of his mouth...?

Way to be both first and first person there Mr King...all in the span of two words...Bravo...