Woman Claims She is the Daughter of Marilyn Monroe and JFK

Burbank, California | A 53-year old woman has presented a paternity action lawsuit this morning before the California state court, alleging that she is the biological daughter of Marilyn Monroe and former President of the United States, John Fitzgerald Kennedy.


I came across this story by happenstance. I'm not too sure about the validity of the source or the information contained within the article. But, it piqued my interest enough and seemed plausible enough to post for discussion.

If you're a Game of Thrones fan it sort of parallels one of the major story lines in the show (Jon Snow's real Mom and Dad and the trouble that Ned Stark went through to keep it secret). In the case of this article it was Marilyns' Cousin who was the keeper of secrets all these years.

There was another woman back in 2008 (Nancy Miracle) that claimed to be a love child but DNA tests confirmed she was in fact not related to either Monroe or Kennedy.

Gladys Baker Morris on the other hand has reason to believe she may indeed be Marilyn Monroe and JFK's love child...

“My mother confessed to me on her deathbed, that my real mother was in fact, Marilyn Monroe,” Ms. Morris told reporters. “She told me that Marilyn was afraid that the Kennedy brothers would have her and her baby killed if they learned of her pregnancy, so my mother had given birth in secret and hidden me away as soon as I was born.”

After some digging Gladys was able to confirm that it wasn't her mother but Marilyns' Cousin that made the deathbed confession.

After hearing her mother’s confession, Ms. Morris underwent a lot of research to clarify her origins, and rapidly found out that she had indeed been adopted.

In took a total of 18 months of legal proceedings, however, before she was finally able to obtain her adoption record, including her birth certificate.

This amazing document, which has become the cornerstone of her legal claim, clearly states that she is the daughter of Norma Jeane Mortenson, better known as Marilyn Monroe, and of the assassinated U.S. President, Jonh F. Kennedy.

Although there was no photo evidence of said birth certificate within the article I have to presume that it was due to being an ongoing legal thing. She has taken on the tumultuous task of verifying this confession

Gladys Baker Morris must now wait for the results of the DNA tests, before she can launch any lawsuits to claim any eventual heirloom.

If her claims turn out to be true, she could the only natural heir to the estate of Marilyn Monroe, which is estimated to be worth more than $100 million and still makes more than $5M each year.

Indeed, she confirms that she intends to sue the Marilyn Monroe Foundation over rights and royalties, once the DNA test confirms her identity.

She also hopes to be able to meet and possibly develop a relationship with her estranged half-sister, United States ambassador to Japan, Caroline Kennedy.

I have to say... there is indeed a striking resemblance to both Mom and Dad... 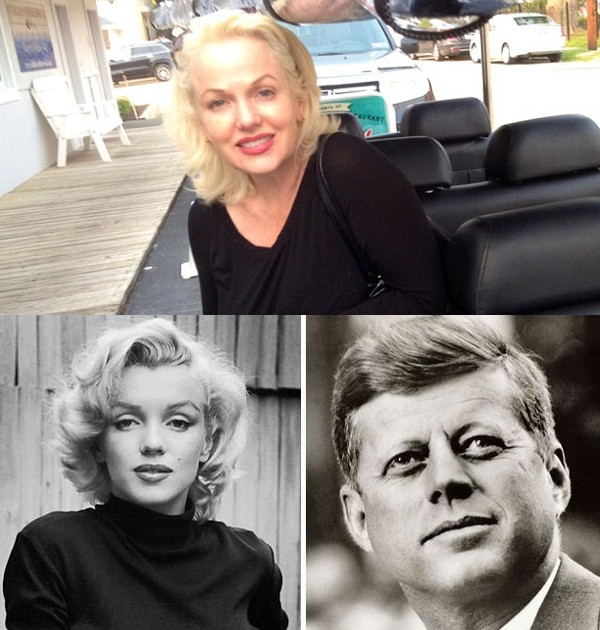 How is that possible?

posted on Sep, 16 2017 @ 11:19 PM
link
I was hoping Weekly World News was back in print!
I miss Bat Boy, and how W and Obama met with the same aliens (totally not photoshopped).
And to be fair, I'm the love child of Ronald Reagan and Jody Foster.

To the HOAX Bin with this post ...my apologies.

Nevertheless.. whomever she is.. she looks like she could be a love child lol
edit on 9/16/2017 by UberL33t because: (no reason given)

posted on Sep, 16 2017 @ 11:26 PM
link
She is very attractive and definitely looks like Marilyn but I have doubts due to surgery by Marilyn as well as this supposed "daughter." Only DNA will make this a real story. She's doing this for the money, obviously.

Nuh uh.
She just wants to meet her half-sister Caroline.
She said so.

Yeah, I'm sure. Of course the article stated she would sue for money from the Marilyn Monroe Foundation.

Or, were you just being your typical sarcastic?
edit on 16-9-2017 by Justso because: (no reason given)

Or, were you just being your typical sarcastic?

originally posted by: UberL33t
But, it peeked my interest

If its true, its damn easy to prove. Take the test and lay it to rest, DNA don't lie.


originally posted by: UberL33t
But, it peeked my interest

No one should take proper grammar for granite

Oh, on-topic. Watch as nothing comes of this and how she tries to save face by conjuring up some crazy conspiracy theory to keep her away from those would-be inherited millions.

Not the first person to claim they were the forgotten love-child of celebrity. Good luck.

Are we on topic? I mean, he's been very-Phagey-lately.


originally posted by: UberL33t
But, it peeked my interest

No one should take proper grammar for granite


"No one should take proper grammar for granite
"

How is that possible?


Maybe the birth certificate was forged to hide her identity.

DNA would bury this hoax.

Gets a star for originality. Get it, a ' star'.


If it isn't, it probably ought to be.