posted on Sep, 14 2017 @ 11:25 PM
link
Ha, that brings me back to this classic scene from a Simpsons episode. I can't find a clip of that scene, but apparently it must ave been ripped off from Oliver thirty years earlier!

originally posted by: underwerks
Given the thought processes currently in use by people on the right, I'm not surprised this makes sense to people.

Maybe I don't fully get it, but it's kinda like embracing derogatory terms toward them to show that they won? IE "Hicks" and more recently "deplorables".

originally posted by: chadderson
a reply to: Deaf Alien

Rebel flag was demonized about 2-3 years ago for this VERY reason, this VERY agenda... setting the stage.

Its more about having "rebels" uniting against the status quo.. so the government does everything in their power to demonize a non-racist emblem, as they have done many other things... like conservatism, anti-abortionists, gun advocates, free speech advocates...

Its all about keeping people from uniting. The rebel flag was the definition of us versus 'the man'... the man won, and the man rewrote history as he is doing today for the sake of it repeating in the same fashion, defeatable, controlled opposition.

Well to be fair, and I don't believe all the "organizations" rallying with Unite the Right, especially the KKK, were co opted(alphabet agency handled) to do the rallies-perhaps the ran co opted leadership by Kessler. However, racist groups by themselves are making the flag and monuments look bad.

KKK "defending"(rally/protest) the monuments has even been denounced by the Sons of Confederates(during the rally in Pensacola FL). It should be that way in other places. The agitators are making Confederate support look worse, already having a bad rap outside of the south for example. I support the heritage aspect of the flag and the confederacy, but I'd expect in this current climate that if I has adorned it I could be classified in a bad light.

originally posted by: 3n19m470
Reminds me of that Die Hard where he wears the "i hate 'n-word's" sign in harlem, the one with Sam L Jackson. 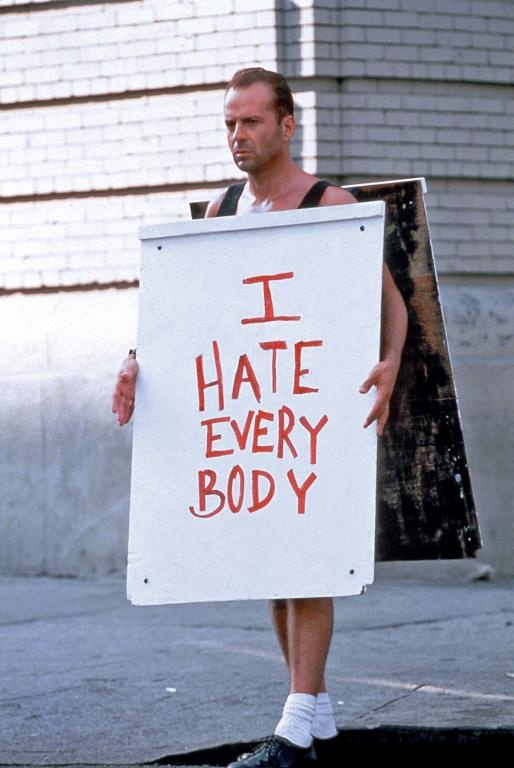 Like Knowledge Hunter said free speech is a bitch.

Wonder if he had any inquiries from interested Saudi's, hear they are into all that, castrate African boy's as well to make them into male sex slaves and eunuch's, fine not just the Saudi's but those other Arabian country's too.
You see unlike in Christianity were Slavery is actually against the religion - do unto other's as you would have done unto you?.
Islamic nation's have nothing against it in there religion, in fact it is enshrined in there religion.
www.gvnet.com...

Anyway this guy is simply a prat, any one of color in the states and elsewhere and most people whom regard themselves as white would be highly offended by his sign, maybe he is just a dumb guy but either way stupid is as stupid does so the saying goes.

originally posted by: Deaf Alien
What do you think? Does it makes sense to you?

It makes partial sense to me, and I'll explain what I mean with an example from my past.

When I was younger, my little brother was spoiled rotten. So much in fact that he could do anything to me, and if I retaliated in any way, my mom beat me. I was the middle child. lol To give you an idea of what I mean, I'll describe the most common situation that happened on almost a nightly basis. My brother would get mad at me, for whatever reason, then start punching/kicking me. I would tell him to knock it off, but he wouldn't listen. After so much time, I would shove him away from me. Well, the moment I would shove him, he would fly dramatically across the room, land on the ground, and start crying. Then, he would call my mom at work and tell her I hit him as hard as I could. This happened for years. My mom always believed him.

One time I grew very sick of it, and while my mom was yelling and hitting me, I walked over and hit my brother as hard as I could. Her jaw dropped to the floor, and I told her "Well, if I'm going to keep getting in trouble for it, I might as well do it!!!"

Now, I can believe he's not racist. I also believe he's an asshole, though, because the point of this was to piss people off, rather than calming their racial allegations.