The End Of The World Is Coming .... probably

The End Of The World, is only just over a week away FFS, 23rd September FYI. 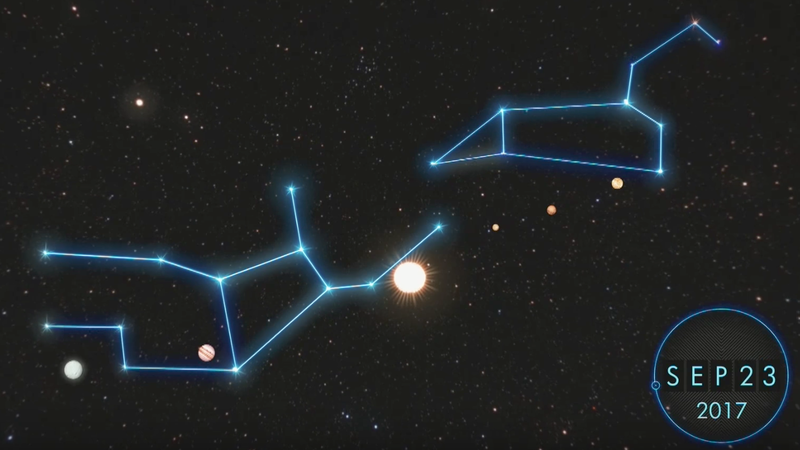 alignment in the sky peaking on Sept. 23, whereby Mercury, Venus, Mars, and Jupiter will be around the constellations of Virgo and Leo, together with the sun and moon.

"A great sign appeared in heaven: a woman clothed with the sun, with the moon under her feet and a crown of twelve stars on her head. She was pregnant and cried out in pain as she was about to give birth. Then another sign appeared in heaven: an enormous red dragon with seven heads and ten horns and seven crowns on its heads. Its tail swept a third of the stars out of the sky and flung them to the earth. The dragon stood in front of the woman who was about to give birth, so that it might devour her child the moment he was born. She gave birth to a son, a male child, who "will rule all the nations with an iron scepter." And her child was snatched up to God and to his throne.

Maybe you think this is all complete BS, I guess well find out soon.

They argue that it all revolves around Israel and the mounting tensions in the region — and that this is it. Israel's existence, a chronology of dates from its foundation to wars, everything, they say, points to the veracity of the old prophecies. One of them in particular, Michael Rood, has returned to Israel to watch the end unfold. Rood looks like a benevolent rabbi, a biblical patriarch. He is convinced that come Sept. 23 something will happen to the sun, signifying the dragon of the prophecy, although not necessarily Planet X. He is convinced that God will send the sign, and it need not be consistent with science. In his world, there are two coexisting parallel realities, a natural and a supernatural one. Come the end, they will clash in decisive ways.

Yesterday I put up This Thread. Importantly, contained therein is this information;

As I stated in the thread, this is an extraordinary decision. This is not just some legal BS thing, Israel doesn't F around just because. There is always a reason.

And I think if nothing happens at the alignment then the religious fruit loops are going to do something stupid, something really really stupid. I mean they're essentially calling everyone to war whether they like it or not.

I wonder if I'll be able to view this with my Celestron telescope from Northeast US. How do I find that out? Great thread, thanks for putting this together!

I wonder if I'll be able to view this with my Celestron telescope from Northeast US. How do I find that out?

You're the one with the telescope, you're asking the wrong person.
edit on 14 9 2017 by myselfaswell because: (no reason given)


Maybe one day the world will actually end and all the purveyors of doom can finally say, "I told you so!"

The world can't end on 23 September 2017. I have two 1st class passenger tickets to ride The Bluegrass Express the next day and I paid in advance.

it's been like a week since we were promised armageddon by an eclipse and people were stating those recent hurricanes were planet killers.

Apologies, I didn't realise that the end of the world was something to be cheery about.


You're the one with the telescope, you're asking the wrong person.

Lol, thank you for putting me in line. To be perfectly honest, I don't have a lot of experience with it other than looking at the moon about a dozen times and I also was patient enough one time to see Jupiter and a few of its moons.

I have grown accustomed to convenience and looking for "apps" or websites that answer questions such as this. A prime example of technology making society think less and look for shortcuts. Thank you for the reminder

Y2K was epic but tha Mayan 2012 blast was almost the end of ME at least.


9/23 I'll be playing with my band in a beer joint watching all the other celebrants over indulge.

So is this end of the world just for Abrahamics? What about the rest of us? I mean you've only brought up that as evidence, thats not really due diligence. But you are right. I will talk to you on the 24th (your time, I'm over the date line down here)

posted on Sep, 14 2017 @ 06:58 PM
link
I find these things interesting to wonder about, dunno much about planetary cycles and such but i do believe they got great connections with our existence here on earth and that there might be something spectacular on our way, other than random piece of rock hurling towards us.

I dunno if u could use this site to check this dates planetary alignments? neave.com...


Not a negative. Part of "fuzzy logic" used in AI
Either or : else maybe

Not the end of the world.

Possibly... Possibly the kick-off to the Tribulation

But we have been talking about it for years....

So is this end of the world just for Abrahamics?

No, they're just going to initiate it.

I will talk to you on the 24th (your time, I'm over the date line down here)

I'm just over the pond cuz.

Ahh hard to tell from that "location". Then we will talk in the 24th mate.... because I am pretty sure we are good. Based on the last hundred end of the worlds....

posted on Sep, 14 2017 @ 07:10 PM
link
a reply to: myselfaswell
There may be something to this Israel connection. Of course the end of the world simply means an end of Western global Hegemony. Not as bad when we unravel that.


Beginning Monday night, soldiers and reservists are simulating a 10-day-long war with the Lebanese militant group to prepare for “preserving the current stability in the northern sector”, a military official said, as well as “scenarios we’ll be facing in the next confrontation with Hezbollah”.

The ‘Or Hadagan’ or ‘Light of the Grain’ drill - which has taken 18 months to plan - will utilise fighter planes, ships, submarines, drones, cyber and canine units and Israel’s missile defence system. Two field hospitals and trucks and helicopters for evacuating casualties will also be set up.

The exercise will begin with small border skirmishes and escalate into a full-scale war - with the ultimate aim of permanently vanquishing the Lebanese opponents. Soldiers playing the role of the enemy will don Hezbollah’s signature yellow and green flag and guerilla-style uniforms as well as fake weapons and explosive vests.

That drill concludes tomorrow. Israel does not just do drills for the hell of it. They typically take action soon thereafter. Almost has a false flag-ish type of feel.

Israel Is Getting Ready for a Major War - and No One Is Talking About It
Israel's Iron Dome tests:


Speaking of Israel’s missile defense system, Defense News recently reported that Israel is readying its Iron Dome defense system for its first intercept test in the U.S., part and parcel of the U.S. Army’s demonstration aimed at selecting an interim solution for a medium and short-range air defense system.

The Iron Dome has proven very effective, scoring over 1,500 intercepts against Gaza-launched rockets since it was first deployed in 2011. However, it is now being tested to see if it can defend Israel against other potential threats, as its proven capabilities “don’t even come close” to the full extent of the system’s capabilities, according to Ari Sacher, Rafael Ltd.’s Iron Dome Systems Project Manager.

Clearly, Israel is preparing its defense systems for something far greater than the standard home-made rockets found flying out of the Gaza strip. Considering the fact that an Israeli military general is drafting a defense policy document with the specific goal of launching a war with Iran, this might give us some clues about what Israel is preparing for specifically.

Over a decade ago, Israel fought a major short-lived war with Hezbollah in Lebanon. Israel has been preparing for its rematch with Hezbollah for some time now, as well as striking Hezbollah targets from within Syria. Hezbollah has been a natural ally of Syria, even dating back to the reign of Hafez al-Assad, Bashar al-Assad’s father.[/url]


Hezbollah is a quasi-ally of not only Iran, but Russia, too. Russia recently threatened to veto any UN Security Council resolution that describes Hezbollah as a terrorist organization. Russia also warned Israel indirectly not to attack Iran in Syria, explaining that parties that violate international law and undermine Syria’s sovereignty will not be tolerated. A senior Israeli official warned the Russian government that if Iran continues to expand its presence in Syria, Israel plans to respond by bombing the Syrian president’s palaces.

It is also worth noting that Hezbollah has spent six years in the brutal Syrian battle arena, during which time they have attained new recruits, battle-hardened their members, and developed the belief that they can successfully take on a number of military forces in the region. As the Hill explains:

“The new cadre of fighters Hezbollah is bringing in is also professionalizing what was previously an explicitly guerrilla-oriented organization. The fight for Syria against the nominally Sunni ‘Takfiri’ (apostate) ISIS, has been a gift to the Shia Hezbollah, spurring recruitment efforts. Put simply, Hezbollah is not just getting better at fighting, its army is also getting bigger.”

Prior to the 2006 conflict, Hezbollah had approximately 13,000 rockets. It now boasts some 150,000 rockets and missiles, as well as Russian-supplied missiles that “can hit anywhere in Israel,” according to one Lebanese commander.

Maybe its just a drill. Or maybe September 23 is the day they strike Hezbollah in Lebanon and get flanked in the Golan as a result. That should make for interesting discussions.
edit on 9-14-2017 by worldstarcountry because: (no reason given)