Wrong, DACA is a response to the GOP's complete unwillingness in the past to tackle comprehensive immigration reform. It was a stop gap measure. They didn't want to solve the problems Dreamers faced, they wanted to use them as a tool to divide us.

People can read and know there is more at stake than the GOP blame game. No, dreamers aren't the cause of people's suffering. Greed is and they know it.

Share love not hate. Dems didn't create this problem. But, Dems and the GOP need to work together, finally, to solve it.

Wow, Trump caves in with DACA because of the fallout he was receiving. Now you find a way to blame democrats for Trump's flip-flopping. Dude, when are you going to see the writing on the wall and stop blaming democrats and everyone else for Trump's own stupidity and poor decision making. This isn't the first time Trump has flip-flopped on an issue!

Democrats in Congress can introduce legislation.

What makes you think they can't?

And the Republicans in the Senate are not unified 100%.

One of these days you and some others might understand the strategies.

originally posted by: xuenchen
So what are Democrats doing with this ?

Why would they want to jeopardize any good relations with Donald and with Republicans in Congress ?

And why would they want to jeopardize any votes for next year's elections ?

WTF are Nancy and Chuck up to ?

Maybe Nancy and Chuck are getting negative backlash from voters and from the DNC and from big money donors ?

threads like this are the real nothing burger. why do you start so many of them when you're saying so little?
edit on 14-9-2017 by fiverx313 because: (no reason given)

yup... a big bunch of nothing.

posted on Sep, 14 2017 @ 12:32 PM
link
In typical Trump fashion, he threw out some ridiculous promise about an issue he had only the most rudimentary knowledge of, and then after realizing the entire country (well, more than half) was outraged about it, he started asking questions about what exactly DACA was. Then comes the hard left turn.

Maybe the guy should spend less time on Twitter and watching cable news op-ed shows, and spend that time actually learning some of the actual details of the various programs he randomly vows to eliminate.

Who knew DACA was about the best and brightest? Who knew they were serving in our military, or studying in our schools?

Everyone, Donny. Everyone except you.

The majority party decides which legislation comes to floor for vote.

originally posted by: MOMof3
a reply to: xuenchen

The majority party decides which legislation comes to floor for vote.

Why didn't you tell me that to begin with?

posted on Sep, 14 2017 @ 12:39 PM
link
OMG!You don't have any thing else constructive going on in your life than to sit up here all day and create stupid threads that nobody cares about.

He tries his hand with the Republicans. That FAILS.

Now he's trying his hand with the Democrats....and trying to NOT piss off his base/supporters.

originally posted by: chadderson
I voted for Trump and have mixed feelings on the DACA issue. Obviously it was a problem created by the democrats that Republicans have to clean up, and look bad for. 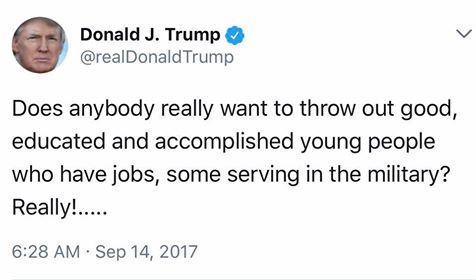 While everyone is distracted though, he will sign a bill on "hate speech" essentially abridging the 1st amendment.

Trump is beginning to draw my ire.


Looks like trump took a dump on the people who put him in office. maybe he has to have a deal any deal. Cant believe his last tweet=Now they are all brilliant educated accomplished "young People. Pelosi must have given him magic mushrooms at their dinner.

What is the Dynamic Duo always up to? They're trying to stir the pot of emotional reactions and cause further discord and internal bickering within the Republican party. They're trying to paint them as a fractured party (not that the party needs much external help) because there is a mid-term election coming up and they really hope that what happened in 2010 on the side of Repubs can happen for the Dems this time around.

I'm willing to bet that there was no "deal" struck, but the problem is that, in Washington, a "deal" always has different meaning than in the real world, so who knows what was said.

SlapMonkey said it so well that I don't have to... but it bears repeating!!!

Democrats can't even introduce legislation, so I don't know why Trump is talking to the democrats.

It would most likely be difficult to get a Democrat bill passed with a Republican-majority legislature, but it can certainly be proposed.


Q. How do you know a politician is lying?

A. Their Lips are moving.

2015–): Paul Ryan promised his caucus that he would apply the Hastert rule to immigration bills proposed during his tenure as Speaker, although conflicting reports have also interpreted his statements as a more blanket application of the rule.[33][34] As of July 2017, Ryan has not violated the majority-of-the-majority rule.
edit on 14-9-2017 by MOMof3 because: (no reason given)