Was I the victim of Psychic Manipulation?

It's called being insane old chap and it happens to the best of us.

I've got neighbors who scream at imaginary friends, yelling and ranting all day and night to the point where I literally threatened to rip their tongues out. I'm not mentally stable myself but that voice inside my head AKA my conscious saw the funny side and that stops me getting angry, now I refer to the block of flats I live in as Arkham Asylum and I am it's Joker.

My neighbors are too stupid to be the clown prince of crime, but some fear me which is good because I have a Vietnam vet friend with PTSD and another with kidney disease that don't need the one man and woman shows every day and all night, so when I yell, they obey. I'm guessing the docs gave you lithium injection or an oral supplement and that's OK, but if you feel side effects alert a doctor-not your psychiatrist- immediately, some shrinks will treat you as guinea pigs in exchange for cash from big pharma, I might know because i'm pretty sure I was one of those guinea pigs

originally posted by: szino9
If even with your own words this company was nothing special, do you honestly, really believe that one of the supervisors actually had some sort of technology, that causes you suffer the mental health issues you mentioned?

You are missing the point. I don't know for certain whether the device was some type of nefarious technology but it changed my mental state in a profound way. I don't know why he would have access to the technology. I didn't mean to imply that the device "caused" my psychosis, only that it led me to a deteriorating mental state.

C'mon mate ATS won't help you... You need to check back to that hospital pronto...

What do you think I want ATS to help me with? I don't need hospital. Those things happened and I can recall these events in great detail.

posted on Sep, 11 2017 @ 09:16 AM
link
I submit to you that the 'flashing device' was some sort of Strobe Light, most likely producing a flashing pattern that induced a state of Seizure in you.... similar somewhat to an epileptic seizure... and then Your Own mind began racing into a Panic Mode of confused thoughts

RE: "An epileptic seizure, also known as an epileptic fit, seizure or fit, is a brief episode of signs or symptoms due to abnormal excessive or synchronous neuronal activity in the brain." (bing)
RE: www.webmd.com...

*** there have been reported seizures to people...caused by TV screen flickering at a particular frequency range that induced a brain seizure

Feb. 29, 2000 (Atlanta) -- Increasing use of video games and television watching will likely lead to an increase in seizures -- but only in certain people, according to Italian researchers. They conclude that a defect in how the brain handles light stimulation -- especially when it comes to light contrast -- promotes the seizures....

That is actually a rather plausible explanation. I don't have a history of seizures but I guess it's possible. 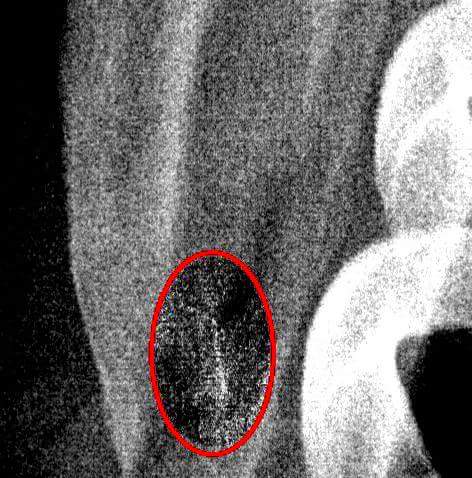 Heres my right shoulderblade...notice the module wired to the bone?
I also have a wire attached to bone on my lower left knee, theres a blue dot. Suffice it to say i found out it was an unbreakable wire. When focussing on both areas during voice attacks. The voices said things like "im losing my being". To the question of it being a.i. reptilian or government. I think its fully a.i. driven. But they transmit bio information from the body. I found my targeting comes from the west.

My partner was hospitalised for very similar reasons, on more than one occasion. It is remarkable just how 'spiritual' the whole experience became - she became incredibly intuitive and almost psychic!

That's the horrible thing about psychosis, the hallucinations seem so real but they are definitely not. Obviously I cannot prove that you were not tapped into by an all knowing entity - but there's a massive chance that the answers from the entity were just from your own brain and your perception of them coming from an entity/elsewhere is a symptom of psychosis.

Even now you will not believe what I type because it all seemed so real to you.

Great that you can rationalise the situation.

Question - Have you ever thought of going back to the place of work and asking them about the flashy thing?

Could it have been that you were already into the psychosis and began talking oddly, therefore they flashythinged you as a joke/bullying?

I think you will find your answers lie in working out what they flashed you with, but I can almost guarantee it was a torch or a phone flash.

One of the messages/thoughts I received on the night out of hospital was that there was a big spiritual struggle between technology/AI and nature. That AI was taking over many worlds.

There is Technology/distraction and then there is nature. I fear that some type of advanced AI controls world affairs on Earth and can connect to any form of technology instantly.

I can relate to the spiritual part you mentioned.

I respect your reply, but there are definitely things that happened outside my mind that were strange.

For one, your symptoms might come back stronger in the future?

posted on Sep, 11 2017 @ 09:38 AM
link
Do you feel any religious/paranormal connection to your experiences?

originally posted by: anotherside
...notice the module wired to the bone?

originally posted by: olaru12
Do you feel any religious/paranormal connection to your experiences?

Spiritual connection 100%. No paranormal connection. One of the "snapshots" I was forced to make was of cigarettes and a crucifix. I was being urged to adopt both as one of the ways to gain personal power.


originally posted by: olaru12
Do you feel any religious/paranormal connection to your experiences?

Spiritual connection 100%. No paranormal connection. One of the "snapshots" I was forced to make was of cigarettes and a crucifix. I was being urged to adopt both as one of the ways to gain personal power.

Cigarettes and a crucifix, now we're getting somewhere.

What does this symbolize and please explain "snapshots"....and did you feel you gained personal power and if so, how is that power manifest.

a song by Reverse

I submit to you that the 'flashing device' was some sort of Strobe Light, most likely producing a flashing pattern that induced a state of Seizure in you....

I think I know the test you are referring to-I call it the RGB test-as in 'Red Green Blue' that refers to the colors of a CRT monitor (now I'm showing my age.) basically you have electrodes strapped to your head and are told to look at flashing lights of different colors, which do seem like a strobe light. It's not painful, but very annoying and scary if you suffer from sever anxiety disorder.

Imagine being forced to look at those multicolored laser pointers that some idiots use to blind pilots, now imagine sitting through that for 45 minutes. It is not pleasant and it takes a day for the goo in your hair from the electrodes to be washed out. I lost a lot of my spectacular mane because of that crap.

I can't imagine an epileptic going through that test, it would be torture.

originally posted by: olaru12
Cigarettes and a crucifix, now we're getting somewhere.

What does this symbolize and please explain "snapshots"....and did you feel you gained personal power and if so, how is that power manifest.

And by spiritual connection...is it in the biblical sense or ???


Cigarettes are a form of currency at public mental health hospitals. I felt like I was being urged to take up smoking and accumulate cigarettes which I could use to control other patients.

When I say snapshot, I mean the mental clicking sound I experienced while attention was focused on a particular person or object, which acted as a cue to do or think about something. This snapping phenomenon happened while in hospital and could have meant the people I was "snapping" were part of the system and could be used as tools for my benefit.

I didn't feel like I gained power, but I was definitely being encouraged to be dominant and controlling towards others, but it's not in my nature to be that way so I resisted.

Nothing to do with the bible. More so that there is a lot of political/social power possessed by the church and I was being urged to tap into that power it felt like.
edit on 11-9-2017 by Incandescent because: (no reason given)

posted on Sep, 11 2017 @ 10:13 AM
link
OP: If you have had a nervous breakdown, the experiences during that breakdown will not be resolved rationally. Put all this behind you and let the psychotic episode recede into the past. Life will give you the answers in the fullness of time, you cannot succeed in solving the puzzle yourself because the puzzle itself is the mind that is trying to solve it.

Your life is ahead of you, and the breakdown is behind you. Like walking away from the wall of a tower, the further you proceed, the better the view you will get when you look back.

So, anyone who doesn't agree is against you? Remembering what you do is somehow a sign of "someone playing with my mind".
You admit to being paranoid, but you don't think it's at all odd that you continue to blame this on some mysterious group targeting you, rather than it being further symptoms of your illness? Just because you are on meds and seeing a professional, doesn't mean you can't have relapses.

After being exposed to this flashing device, I felt really nauseous. My thought patterns became incoherent and I generally felt awful. It was mentally the worst I had ever felt in my 30+ years alive. I still don’t know what that device was or how it affected me, but it led to my hospitalisation and resulted psychosis.


Was it flashing like a strobe light? Certain frequencies can induce seizures in people with epilepsy, others match alpha rhythms within everyones brains, can induce weird sorts of feelings, including nausea, headaches, psychosis. Generally though the effects are limited and stop when the device is turned off.

Remembering a hobby strobe unit they used to sell with a warning about epileptics, 'mongoloids', and alpha rhythms.

Early models had a variable dial that could set to specific strobe rates, later models had these ranges omitted.

Heres one of those vintage models. See the variable dial on the bottom right? Thats why they called it the "Psycho Strobe".

Shutting down every conversation about fringe experiences doesn't really help the deny ignorance bit. "Mental illness" bamm, nothing to see. But really what could be the cause of many of those illnesses is manipulation of various kinds.
Why can't you just keep it to yourself. Give a star to someone who said it first and let us sickos have some harmless fun.