Has it really been 16 years?

I swear I can remember that whole horrific day in 2001 like it happened last week. I can almost replay that day's memories like a movie, with fast forward and rewind available. I remember also the emotions, shock, fear and ultimately anger. I will never be able to forget any of it even if I wanted to. I still believe our world changed on that day. We all have theories about the events of that day, conspiracies etc. None of it changes the unforgettable memories of that one day. Not for me.

I'm curious, how are your memories holding up?

. I remember also the emotions, shock, fear and ultimately anger. I will never be able to forget any of it even if I wanted to. I still believe our world changed on that day.


Compared to whats happened to the world since... Ask the millions of displaced and dead people in the Middle East and Africa if they remember, how they felt, the day the bombs rained down.

I can still picture it like it was yesterday. I feel as if the veil had been pulled away that day and any innocence was lost. My children were very young and my parents were very old. I recall coordinating by phone with my core group in case there were more attacks and we needed to be together. I was in Central Florida that day. My friend was travelling and he was in Chicago maybe (can't remember) for work. He is actually the one who called me at the office to tell me what was happening.
Shock, horror and disbelief are what I remember still to this day. It made me realize how horrific it must be for humans who live in war zones ever single day.


I'm curious, how are your memories holding up?


It was one of those days that was so shocking most people remember where they were and what they were doing when they saw or heard of the attack.
My memory of that day is crystal clear even though I was experiencing the events here in the UK.

originally posted by: ausername
I'm curious, how are your memories holding up?

I had tickets for that night's Yankees/Red Sox game at the Stadium and instead of calling to see who could go we all ended trying to find out who amongst our friends that we knew who worked at the Trade Center were alright and found out that some of them were killed.

I remember the events quite clearly.
I was younger and my mind was not as fried and jaded as now....lol

I was in the office at work watching fireman running toward the towers and saying get the hell away, those are coming down.

posted on Sep, 10 2017 @ 09:44 AM
link
Had those events taken place as little as one year later there would have been a great deal more footage. 2001 was just before the advent of the world changing social phenomena of everyone carrying highly portable video capture devices.

posted on Sep, 10 2017 @ 09:58 AM
link
I remember it but i was very young. I was in first grade. Our teachet wouldnt tell us anything but they called school off and my mom picked me up shortly after it happened, before the collapse. I remember watching them come down on tv in the living room.

Certainly has changed damn near everything ever since.

For me it was a double hit that year, and by the time 9/11 rolled around reality wasn't believable then. 9/11 alone always reminds me of that rocky time in life.

originally posted by: Tempter
The Patriot Act. May it burn in hell.


Don't forget the conveniently timed anthrax attacks on the offices of powerful lawmakers. Those attacks ensured that the Patriot Act passed.

I'm curious, how are your memories holding up?


Vividly - I watched it live on Foxtel (CNN, Fox, MSNBC, CBS, BBC, Sky) just after the first plane hit and stayed up all night until I went to work the following morning then again that night after work - I did this for weeks and months. I remember seeing the plane hit the 2nd tower on live TV and footage of the smoke billowing from the Pentagon and debris in a field in Shanksville.

Then we have building 7 - nary a mention in the 9/11 commission report, collapsed at free-fall speed, was called by BBC 20mins before it occurred. Was not hit by a plane.

Loose Change & Zeitgeist on YT piqued my curiosity to explore the conspiracy(s) surrounding that day. The ATS 9/11 Conspiracies forum is wild, here's a screenshot of the top 8 topics (ranked by most flagged)... 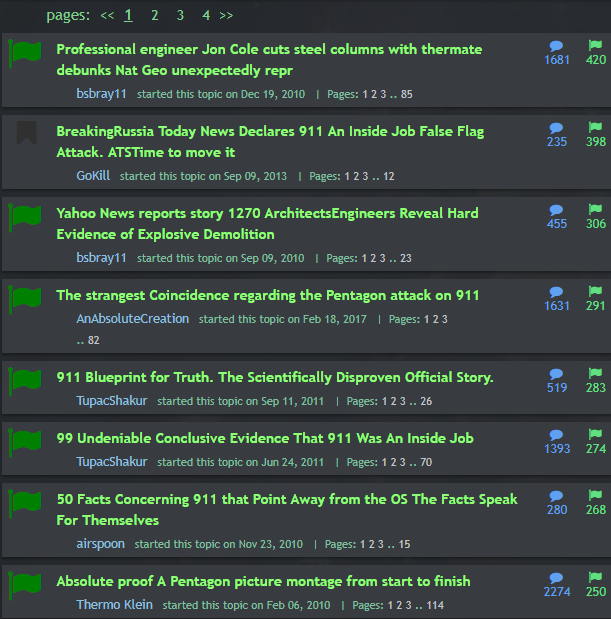 You can milk a cow for fifteen years, Morty.

I was in second grade when it happened.... you do the math. By the time I hit seventh grade, I knew it was an "inside job," I didn't know as much as I know today, but I know something wasn't right about the official narrative.


May its authors and anthrax pushers burn in Hell.

The document itself can be repealed with a pen and paper.

I was watching the news from my desk when the 2nd plane hit.

I remember the whole thing being surreal.
edit on 9-10-2017 by cynicalheathen because: (no reason given)

posted on Sep, 10 2017 @ 11:23 AM
link
I was sitting at work when a co-worker's wife called and said a plane just hit one of the towers. At first I thought that was one hell of a screw up, but it didn't take long for it to sink in that mistakes like that don't happen. It was intentional. I started working the keyboard looking for live news feeds and watched the second plane hit. We were all pretty shaken and when the first tower fell we all kind of lost it a bit.

The news had been talking about every flight being grounded and the skies looking so empty. I lived and worked near Chicago. Pretty much everywhere was under a flight path. it was not uncommon to see many planes in the sky at any one time. On this day when I walked out the door to go home the sky was clear and blue and completely empty. I was a few minutes down the road when I saw a vapor trail from a jet in the sky. It was chased from two directions by two other vapor trails that were really moving. The second two caught the first one, swung around behind it, and stayed on it til they were out of sight. I stopped at a gas station, bought a disposable camera, and took pictures of it, not that you could see much. At first I thought maybe it was another hijacked plane but then I heard that the POTUS was being secreted away to a safe location somewhere and figured it was AF1 with a military escort. At least I felt better thinking that was what it was.

I get that its a national tragedy that many lost folks they love from. But the folks who didn't even know anyone in NYC seem to be the most rabid "Never forget" proponents.

Me? I'd love to forget it. IT was the day that destroyed the America I knew. And it wasn't even terrorists who did it. It was us, in our fear. We traded freedom for security....and it sucks.

posted on Sep, 10 2017 @ 11:50 AM
link
I was visiting Costa Rica with my daughter. A group had just returned from riding horses on the volcano top. We were being served lunch at the most beautiful vista I had ever seen. Thought this must be heaven. Suddenly the gentleman sitting next to me jumped up to answer his cell phone (one of the international ones-he was some government official with the governor of South Carolina). He came back to our table with his face white as a sheet. Told us what had happened. Didn't believe it. He thought this meant war.
We took the two hour drive back to our hotels and watched it in Spanish on our tv-I cried and cried-our tour group told us to stay in our rooms and not to speak English. I watched it over and over and could not stop crying.

Took an extra week to get home because all flights were cancelled-as well as cruise ships etc. When we got to the US airport in Atlanta it was deserted except for the military standing still with guns in arms.

Funny, my two twentyish kids didn't seem too concerned although they were sad. I was so afraid this meant WWIII.

Same during the grounding of jets during the Icelandic volcano. Skies clear and blue and mental health everywhere under these blue skies improved!

Jets cause depression, science proves it. Depressed people want to go on holiday, often flying there in the jets that cause their depression. I'll be glad to see the end of mass air travel.

We'd been out. We walked in, switched on the television, and saw the disintegration of one of the towers. Our ten year old son grunted then switched channels looking for something more interesting. I switched back and said "Nothing like this has ever happened before". He still wasn't interested and isn't interested now.