The Big Lie: Exposing the Nazi Roots of the American Left

originally posted by: xuenchen
a reply to: DJW001

Indeed it does. But knowing this and responding appropriately rather than with blind rage would still be a better option.

If someone already has their fisted balled and you poke them in the chest, you want violence as much as them. That isnt "cuvilization".


dude, these are regular, emotion driven humans, in a dangerous situation, trying to defend their homes. you're sitting on the sidelines, uninvolved and comfortable, and criticising the people involved for not handling absolutely everything note-perfect. are you implying that if you were there you would have rolled in all MLK and Buddha and Gandhi like some world leader voltron with the exact right pithy speech to turn the tide?
it's such a pathetic and common copout to say "well yeah technically they're right but they got too mad so they're just as bad"
like these are real people in real danger with a lot on the line.
if you can do so much better then why aren't you out there negotiating permanent world peace right now?
edit on 12-9-2017 by continuousThunder because: mess

Dinesh D’Souza does have a point. Just like pre-civil war democrats wanted to control those they saw "as lesser than white democrats", these days we are also seeing democrats, and the left in general once more wanting to control people's lives.

In Conversation: Bill de Blasio
...
In 2013, you ran on reducing income inequality. Where has it been hardest to make progress? Wages, housing, schools?
What’s been hardest is the way our legal system is structured to favor private property. I think people all over this city, of every background, would like to have the city government be able to determine which building goes where, how high it will be, who gets to live in it, what the rent will be. I think there’s a socialistic impulse, which I hear every day, in every kind of community, that they would like things to be planned in accordance to their needs. And I would, too. Unfortunately, what stands in the way of that is hundreds of years of history that have elevated property rights and wealth to the point that that’s the reality that calls the tune on a lot of development.

I’ll give you an example. I was down one day on Varick Street, somewhere close to Canal, and there was a big sign out front of a new condo saying, “Units start at $2 million.” And that just drives people stark raving mad in this city, because that kind of development is clearly not for everyday people. It’s almost like it’s being flaunted. Look, if I had my druthers, the city government would determine every single plot of land, how development would proceed. And there would be very stringent requirements around income levels and rents. That’s a world I’d love to see, and I think what we have, in this city at least, are people who would love to have the New Deal back, on one level. They’d love to have a very, very powerful government, including a federal government, involved in directly addressing their day-to-day reality.
...

What's more, President Trump called out against the violence from both groups, including the "Unite the Right" which was composed of a few thousand, yet the left and their allies still claim President Trump supports the KKK"... Of course these same people ignore the fact that Obama defended the violent, and racist group BLM even during a police funeral in which a BLM fan/member murdered police officers...

Exactly. I think they do that to get us to forget that it was literal Neo-Nazis in 2017 marching alongside conservatives at a "Unite the Right" rally to protest the removal of a confederate leader.

Wait, do you mean the same "Unite the Right" which was created by your fellow leftist Jason Kessler?...

Trump lovers who want to militarize the cops ... step up the stupid "war on weed" ... screech continually about "Da Laws" in regard to hundreds of thousands of kids who grew up here and are working and contributing to our society here ... then want to claim that it's the "other side" that is controlling, authoritarian, totalitarian Statists.

Why do conservatives think they are on to something whenever they bring up Democrats being racist in the past? Just because it happened in the past doesn't mean that is how things are today. Why do you guys always skip over the part of history where the racist Democrats switched sides to the Republicans? Oh wait, because that conflicts with your ridiculous premise that early 1900's Democrats have the same beliefs as 2017 Democrats.

Being racists in the past?... Do you mean that democrats are not being racists these days against whites?...

From the attempted guilt trips that democrats and the left in general are using these days...

From forcing people in all walks of life to leave their jobs for being white, and/or for being conservative/republican...

Democrat Party Still Racist After All These Years

So free speech is fine ... until you don't agree with it, then it's racist.

You people, the left and your allies, really can't participate in a discussion without using nothing but ad hominem fallacies, and absurd straw men arguments can you?...

War on weeds.... Do you mean the wall that democrats including Bill Clinton and HIllary among other democrats have stated in the past that is necessary to stop illegal immigration, and stopping dangerous drugs and criminals from being brought over from Mexico and South America?...

Oh, and as for "those hundreds of thousands of kids who were brought illegally and grew up here"...

So free speech is fine ... until you don't agree with it, then it's racist.


originally posted by: xuenchen
a reply to: DJW001

Oh yeah, i guess xuechen forgot that you and your left-wing friends denounce as "fake news" anything that does not come from a left-wing source...

...
David Duke, former Grand Wizard of the Ku Klux Klan and former one-term Republican Louisiana State Representative showed his support for what he called the "Occupy Zionist Wall Street" protesters. Duke said that "The Zionist media has their paid whores condemning the demonstrations across America against these criminal banks" (citing Rush Limbaugh, Sean Hannity and Bill O'Reilly as specific examples), adding that "I cheer the men and women in the streets condemning the international banks that hold America hostage."[47][48]
...

You have no idea how riculously funny your posts are, do you?

You think keeping people as slaves was free speech?

You have no idea how riculously funny your posts are, do you?


Heck aren't you arguing that because NAZIS agree in some things with Republicans that Republicans are Nazis and Nazis are Republican?... That a$$hole Duke defended and agreed with Occupy wall street... You know, that same movement which used very far left-wing symbols such as this... 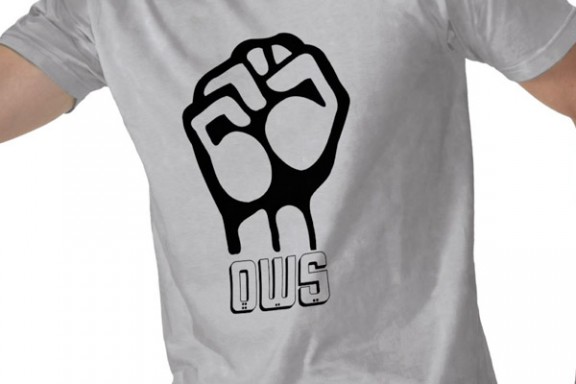 Which is the same as=

But of course, when the KKK agrees with the lefties then "it is just a ridiculous funny argument to imply that this must mean the kkk are lefties"?... Cherry picking much?...

So by your logic if David Duke endorses something ... it's KKK and leftist?

So by your logic if David Duke endorses something ... it's KKK and leftist?

BUHAHAHAHAHAHA... Hasn't the argument of those like you been that because the KKK agree with some Republican issues, and endorse Trump that Republicans are NAZIS and the KKK are Republican?... That's what the left in this thread and others have been trying to claim, including you...

You left out that he sided with OWS against the "JEW BANKERS."

I know you're not concerned with facts and details bud ... don't worry about it.

You left out that he sided with OWS against the "JEW BANKERS."

I know you're not concerned with facts and details bud ... don't worry about it.


Oooohh...so you left out that "the anti-zionist movement" involves people in the left as well?...

Heck, how many threads and posts have been made in these forums by many in the left arguing "against the zionist elites"...

Can You Be a Zionist Feminist? Linda Sarsour Says No

Anti-Semitism Is Creeping Into Progressivism

The above article is wrong in one thing...anti-semitism has been creeping into progressivism and leftwing groups for a very looooong time.