Self In The World

posted on Sep, 6 2017 @ 06:07 PM
link
I'd like to start a conversation here, one where we can 'pool together' some basic sorts of ideas as it relates to the way we experience consciousness - of the world, of ourselves, and of ourselves in the world.

The former and the latter are interesting fields of research, but one could well argue that they are ancillary, or secondary, to the structural configurations that form between self in the world...with other humans being of the most immediate significance. This is easily the most overlooked way of conceiving the nature of how we function, yet its the most important and predictive framework there is. Nothing is bigger than the organism-in-the-environment-with-salient-others, and so, every state, in effect, could be conceived as a probabilistic function of how the matter which organizes your body interacts with the environment around it. In humans, because we have pronounced powers of metacognition - or to keep track of what we think, feel, and do, and the way these three levels interrelate with one another and aspects of the outside world which trigger their emergence into awareness - we are able to control, or inhibit, our own consciousness with relation to the meaning any sort of experience holds for us.

Philosophy is a developed expression of this dynamical ordering process, where the entirety of self-experience is organized by consciousness with reference to high level recursive systems of meaning; for instance, ontology, epistemology, and ethics, are regarded as different aspects of human mental interests - nature of reality, how we know what we know, and the way we relate to one another. All of these conceptions are ideas about the ideas we have; and organizing them, or the way it is our mind cogitates, into different categories of relation. This is really an organizing process that has advanced well beyond the reflexive-cognition which builds up mythological consciousness - whether in aboriginal peoples, or the "mythical-literalists" of the worlds dominant religions.

A mistake, however, is to conceive of these fields as distinct and different, as if the rules - or regularities - which underlie our self-construction at the material level weren't a singular process, subject to a singular homeostatic rhythm, which implies that ethics, epistemology and ontology are different aspects of a singular process (biological self-regulation) which human consciousness constrains into the interpersonal (ethics) the way the world around us, and the history of our interactions, affects the way we know the world (epistemology) and what all this evidence suggests about the nature of ourselves in and as the universe (ontology).

You can learn much simply by observing how your body responds to things. This is because the body, or affective experience, acts as an internalized cue to the cognitive minds self-orientation in the world. I like to think of this in terms of Jakob von Uexkulls "point-coiunterpoint" doctrine, perhaps because it reminds me of the Yin-Yang 'dialectic', which strikes me as the simplest description for the dynamical core of biological reality. 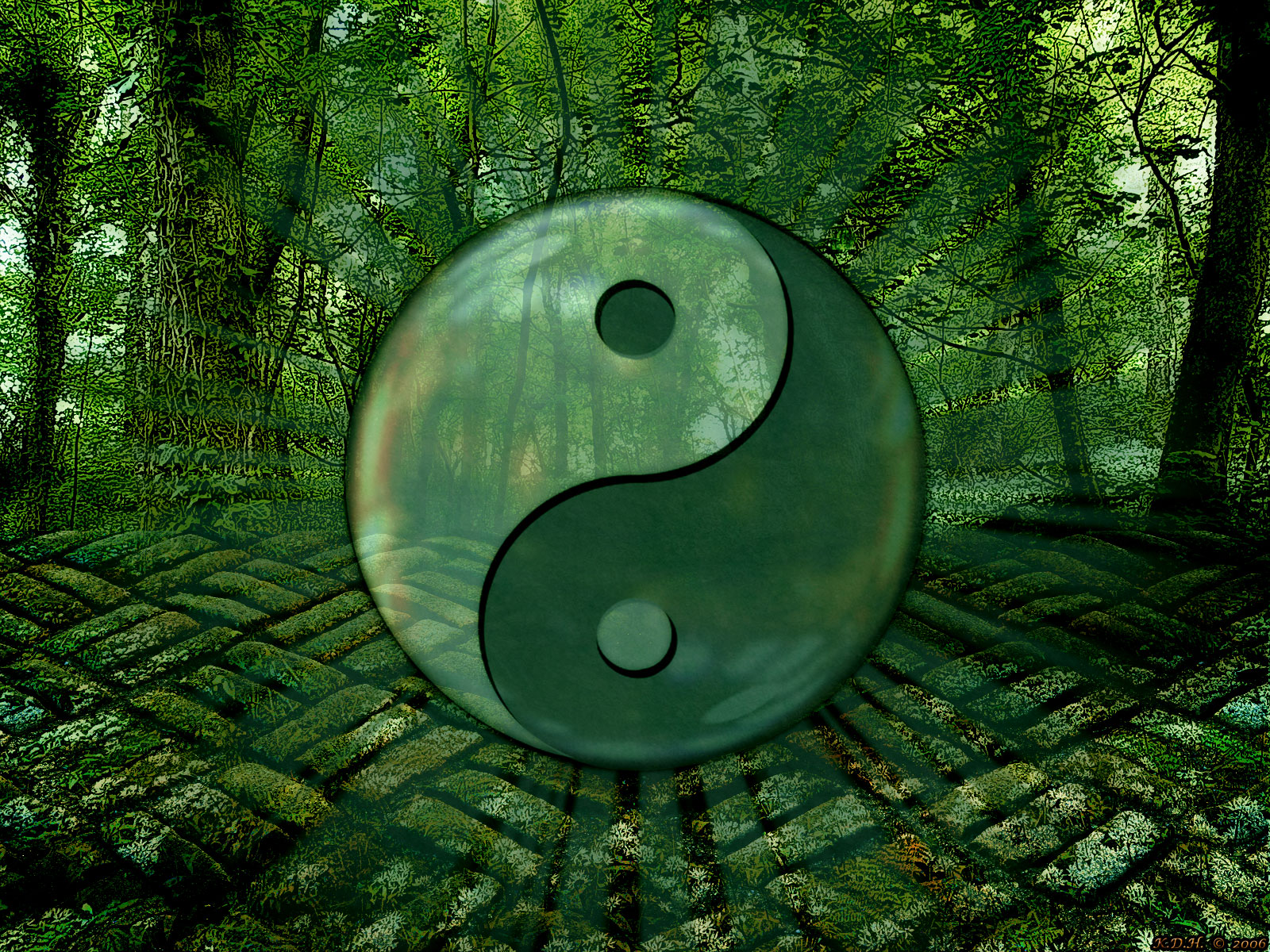 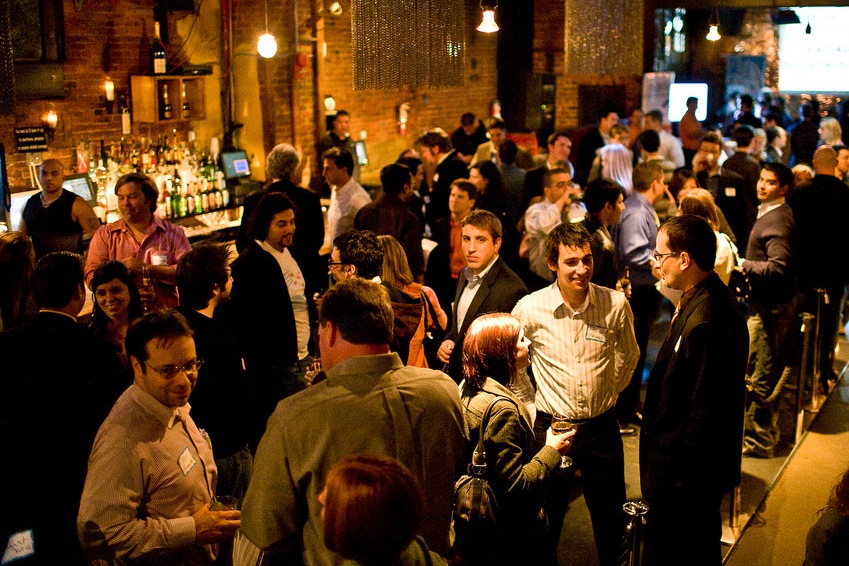 In this first picture we see what appears to be a somewhat upscale bar scene. Already, a particular socioeconomic strata has contextualized my subsequent awareness, so that my mind now starts to think of itself in terms of being in that environment. My response will be different from yours based upon my own history of interactions in environments which associate, or correlate, with the meaning my brain extracts from this sort of picture. 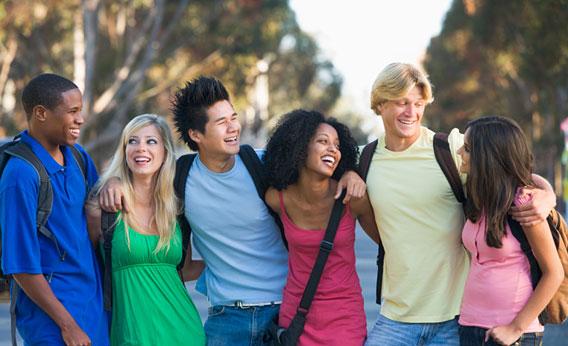 This picture involves a different age group, and for some people, there may be no discernible difference between this picture and the previous one. But there is: what do you focus on? Do they not look cheesy? Are you perhaps looking at the white girl looking up at the black guy, as I'm prone to do (even though I am consciously not racist)? The external scene literally 'reads off' the meanings that have formed up until this point in your mind-brain, "dissipating", or processing, the energy that moves through your nervous system, with reference to "what it means for you". I am not racist, but have a history of insecurities that have disposed me to become reflexively oriented, in some situations (insecurity of some sort) to stupid things like a white girl looking at a black guy.

Notice, also, how I implicate the integrity of my self-esteem. Self-esteem, in turn, is affected by diet and nutrition; sleep and physical activity. Self-esteem, inasmuch as it is about your self as a social-being, is fundamentally regulated by the qualities of your interaction in the world with others.

Consider this diagram for a clear-cut explanation for how our mind self-organizes: 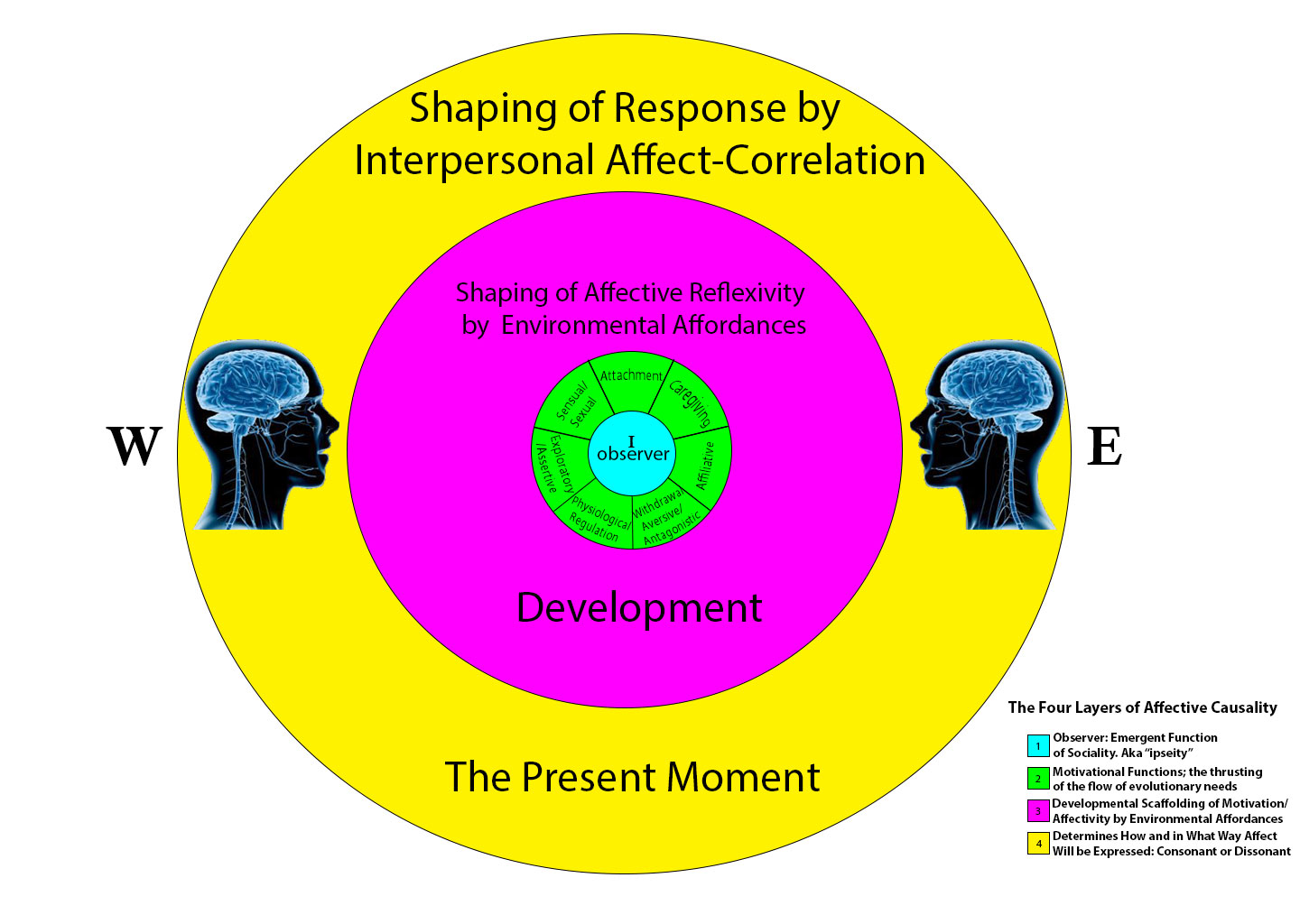 This picture describes the 4 ontological 'layers' that exist within our experience of reality, with primary reference to the status of different functions.

There are four levels:

1. Is the observer self that is implicit upon birth, and is developed as one continues to grow, reaching maturity, usually, in the 30's and 40's, and further developed throughout the lifespan. It is present, also, in the evolution of life, inasmuch as it seeks to survive, and seems to know where to go to continue living. It is thus the oldest temporal layer.

2. Here we are talking about the functional context of life. Motivations express needs; needs are non-negotiable. The following 7 motivational systems are derived from the work of the developmental psychologist Joseph Lichtenberg, and it seems to be a legitimate description of how an adult human personality more or less functions i.e. in terms of one of these motivational functions. Attachment, Caregiving, and Affiliation, are different expressions of a social-urge which has different gradations, literally beginning and becoming shaped by the attachment experience; which in turn will influence how we seek to care for others (how much) and how we connect or affiliate with other humans. Sensual is related to sexual, and usually embodies some degree of caregiving, and later on, romantic attachment. Exploration is a basic animalian drive which is oftentimes conceived as the 'edge' of any organisms being in the world moving into its "adjacent possible". Physiological is a very broad category which modifies many other functions. And again, aversive-withdrawal has much to do with the self-preservation and homeostatic coherency.

3. Around the "long term" nature of motivational systems, is the smaller temporal window of your brains actual development. Your brain - and your mind - is a dissipative structure, which means it has formed around certain meanings, meanings which are genetically and epigenetically deeply entrained into the functionality of your nervous system.

4. The shortest time-scale is the present, of which other people, insomuch as they are around you and your brain, act upon your perceptual systems, and so, activate certain meaning-making processes.

This schema also serves to orient us at an ethical level as well, as it guides us into considering those dynamics - from levels 2 and 3 in particular, which constrain how a person can realistically act - or function, in terms of the material regularities which underlie their dynamism.


Feeling uncomfortable with the idea that individuals of different color would interact sexually and reproduce could actually become a real problem as time goes by. Its not really difficult to understand as in time those who insist upon enforcing this taboo could end off resulting such a population becoming so related they are no longer viable. Historically this problem is not unknown. Consider the issue of the Romanov's and cause and to be clear and in general of the Royal families of the day. This, as I am explaining would be upon a larger scale, so while it would take about 2000 years at most it still obviously will become a problem.


Everything that the five senses experience is the result of internal representation. There is currently no real reason to consider that in relation to Extra-Sensory capacities the same would apply.

Despite the delusion of a particle reality created by the limitations of measurement, every piece of existence is connected to every other piece of existence through the sharing of a single wave of continuous non-discrete energy. Every word and sentence about reality and who we are is delusion. Reality is always something much bigger and stranger than anything we could ever comprehend or experience.


Is Consciousness an Abstract?

Math is an abstract.

Could Consciousness be considered abstracts because they developed math?


A position would be that given math is a rather accurate abstract and we came up with it, could we have access to a perspective that is accurate enough to get us to this point. Scientist in relation to conducting relatable research actually work mathematically with the issues of infinities, pretty much on a day to day basis. In consideration to all potentials we could be part of something that is beyond physical consideration as we generally comprehend it?

Multiverse theory originated from issues related to Chemistry and specifically those related to the Electron Cloud.

Abstract: I survey physics theories involving parallel universes, which form a natural four-level hierarchy of multiverses allowing progressively greater diversity. Level I: A generic prediction of inﬂation is an inﬁnite ergodic universe, which contains Hubble volumes realizing all initial conditions — including an identical copy of you about 1010 to the power of 29 m away. Level II: In chaotic inﬂation, other thermalized regions may have diﬀerent physical constants, dimensionality and particle content. Level III: In unitary quantum mechanics, other branches of the wave function add nothing qualitatively new, which is ironic given that this level has historically been the most controversial. Level IV: Other mathematical structures give diﬀerent fundamental equations of physics. The key question is not whether parallel universes exist (Level I is the uncontroversial cosmological concordance model), but how many levels there are. I discuss how multiverse models can be falsiﬁed and argue that there is a severe “measure problem” that must be solved to make testable predictions at levels II-IV.