Look at all that evidence which adds up to ZERO proof of anything...

Until proven it's just a bunch of could be.... hopes and dreams.... conjecture...

You have no idea what I do for a living as a scientist, or why I support evolution

You've talked to every scientist? Why do I say that. Because there is no such thing as an "evolutionist" it is an accepted scientific theory. Thus you can't agree with science, and not one of the theories, unless you can prove otherwise.

You also do get that may scientists are religious right?


Just curious, if you are that naive or being obtuse.

originally posted by: Phantom423
I will setup the schedule and pay for it.

Perfect. I have the samples. I contacted the archaeologist and he was unsure if the samples were contaminated, but as per my discussion with the AMS lab techs, they will be able to work through that because my sample is large enough to remove the external layer.

I will contact Dr. Cherkinsky at the University of Georgia...

That won't work. The anti-scientists at UGA are no longer accepting dinosaur bones to be dated because they are afraid of the current scientific inquisition that allows no lab to discover any evidence against thy god evolution. Link

The samples are ready when you can find a lab not afraid of the truth.

I will need a complete copy of the previous reports including photographs, measurement and weights of the samples which were analyzed previously. The samples in your possession to be delivered must be verified. An independent forensic investigator will verify that the samples in your possession as the same samples which were presented to the labs in Arizona and Georgia.
edit on 29-10-2017 by Phantom423 because: (no reason given)

It's the theory of evolution that once stated giraffes evolved from horse's... That was never my belief...So the misunderstanding shows your stupidity not mine...

Your DNA is similar to a banana does that mean it's your ancestor?

Science isnt your thing is it? First what we share with a banana is predicted protein-coding genes, approx 36,000 in the banana genome which is more than that predicted in humans. With 36,000 genes bananas will match most life on earth. By the way humans are between 19000 and 20000. Just you trying to make this comparison shows me two things. One you dont understand genetics or biology and two your sources are questionable.
edit on 10/29/17 by dragonridr because: (no reason given)


That won't work. The anti-scientists at UGA are no longer accepting dinosaur bones to be dated because they are afraid of the current scientific inquisition that allows no lab to discover any evidence against thy god evolution.

I am not contacting him to analyze the samples.

I have 2 labs which will accept the samples with proper documentation:

Just remember the next time you get into an airplane, there's less evidence that the machine will fly than there is for evolution.

Just remember the next time you get into an airplane, there's less evidence that the machine will fly than there is for evolution.


That is in no way true. Aerodynamics, gravity, etc, are all consistent physical laws that are predictable and testable in a lab. Evolution is not.

Can you provide evidence, from a neutral source that they are not accepting bones?

Sure it is. Let's get on with the project. Please provide the original documentation which tracks the history of the sample and the analysis from both labs.

The University of Georgia lab will not accept any samples that do not have an authenticated history. Cooperton thinks that they won't accept samples because "they didn't like the results" or some such nonsense.
The samples given to UG were given under false pretenses. When the lab found out about how the results were being used, they decided not to accept samples from religious groups whose motives were questionable at best.
The lab was not told that the bones were from a dinosaur. Therefore, as you know, the protocol that was used was different than it would have been if they had known the origin of the specimen.

Yeah except that is not quite what was implied now is it Any analytical lab knows better than accepting random samples. next thing you end up in court defending something you did not say

Here's a jpg of the UG Isotope lab submission form. Note on page 2, there is a requirement for a complete description of the sample including history, location of discovery, environment and context. The lab can't be responsible for people who submit a sample under false pretenses. The fraudsters posed as research scientists. A copy of the original form filled out by the fraudsters may be obtainable. 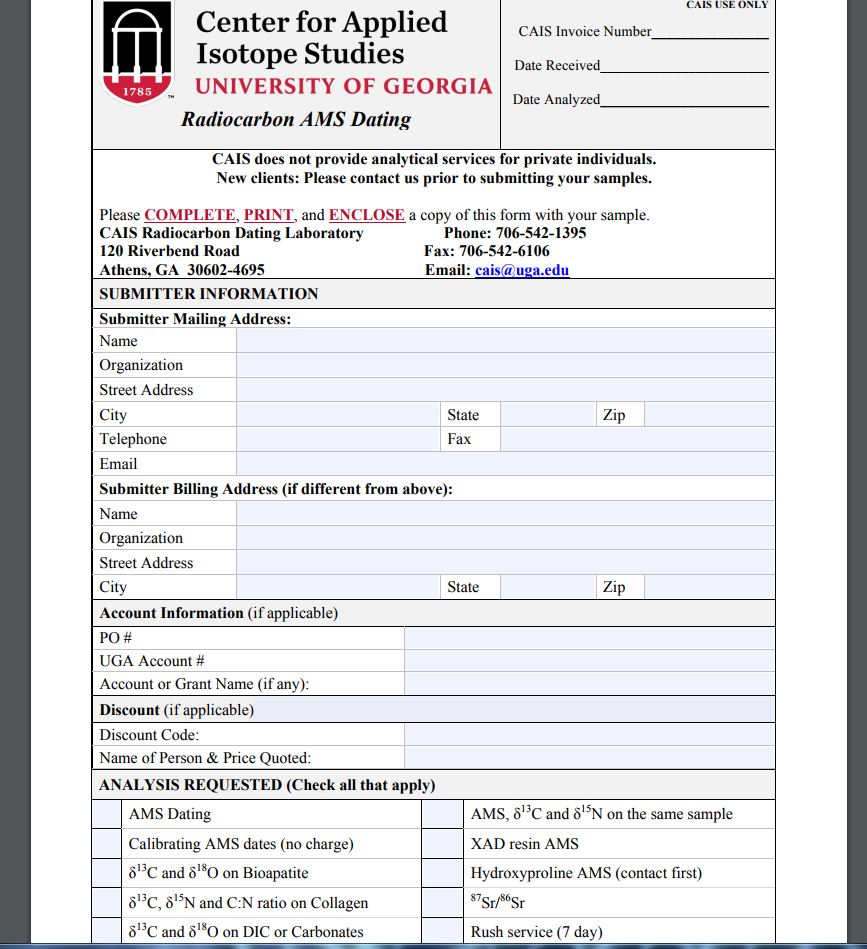 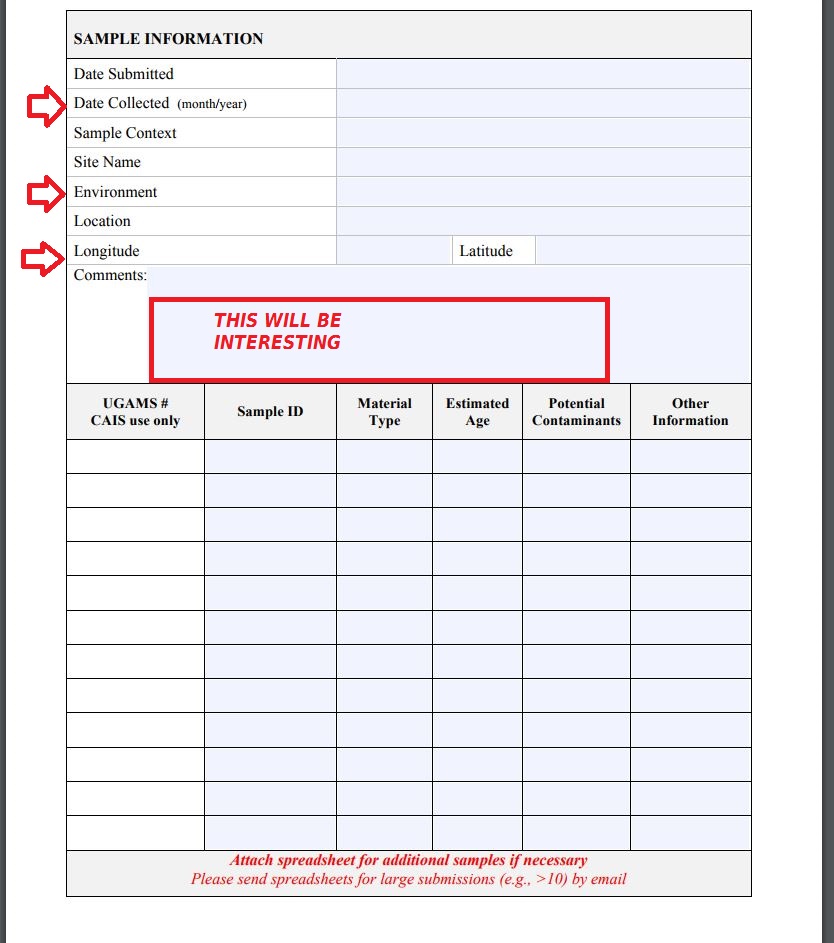 Like I said, it is what I'd expect. We fill out similar forms for analysis of the API's we make (when using an external analytical lab) and expect the same from clients.

Its not that they are unwilling to analyse the bones. It is that they want the equivalent of a "chain of custody" to go near them.

I can guarantee that no lab will touch any sample with out that.

I will also note the email that was quoted is from 2014 ... just saying (to creationists) that this is not a new thing. Fake samples, get treated with the contempt they deserve. IF they are legit, surely they can be proven to be such.

Just as a note, you mentioned an "AMS technician". I hope you're not putting some poor soul in jeopardy of losing his/her job by misrepresenting your "mission". A technician who removes or gives out lab data without the permission of the chief, is at serious risk of losing their job. Just a thought.

And yes, God is the answer to all things understood and all things not understood. God is All that is. Everything is made of God. And so you could argue that we are God experiencing itself.

God is a word. It is used to explain the things not known to us along with it being reflective of our deepest fear - the knowledge of death, in a long term sense, not just when seen in the eyes of a predator.

Words are drawn symbols or spoken sounds (the second of which do not exist everywhere in the Universe btw) that are used to summarize/organise concepts of things that we either see, hear, touch, smell or taste. Senses that seem to almost be results of "hallucinations".

At the same time science is also a word. It is used to describe our search for knowledge and understanding of what/where/how/why we are. Science also tends to make mistakes and constantly has to adapt and expand along with our awareness of our surroundings.

God and science are like two brothers, one weak but honest and smart, the other strong but arrogant and stubborn, and yet both come from the same place.

If the two join forces, I think the errors both are making might actually be reduced and the level of development and awareness for both would exponentially skyrocket. Basically we might actually get some real answers.

I guess... erm... this is my belief system. Should I start a religion so I could raise some funds to aid science?

P.s.p.s. Both are a counter reaction from entropy.

Goto an airport sit outside and look up in the sky...

I can tell you are not very bright...
I say something... Then you back up exactly what I have said with your shared data...
And you don't even realize it...
Are you Ok?
Thanks for backing me up though...