posted on Sep, 4 2017 @ 11:51 AM
link
I took a spontaneous detour at the last minute to do some fun shelling at Honeymoon Island Saturday, September 2. I managed to catch a wonderful sunset. 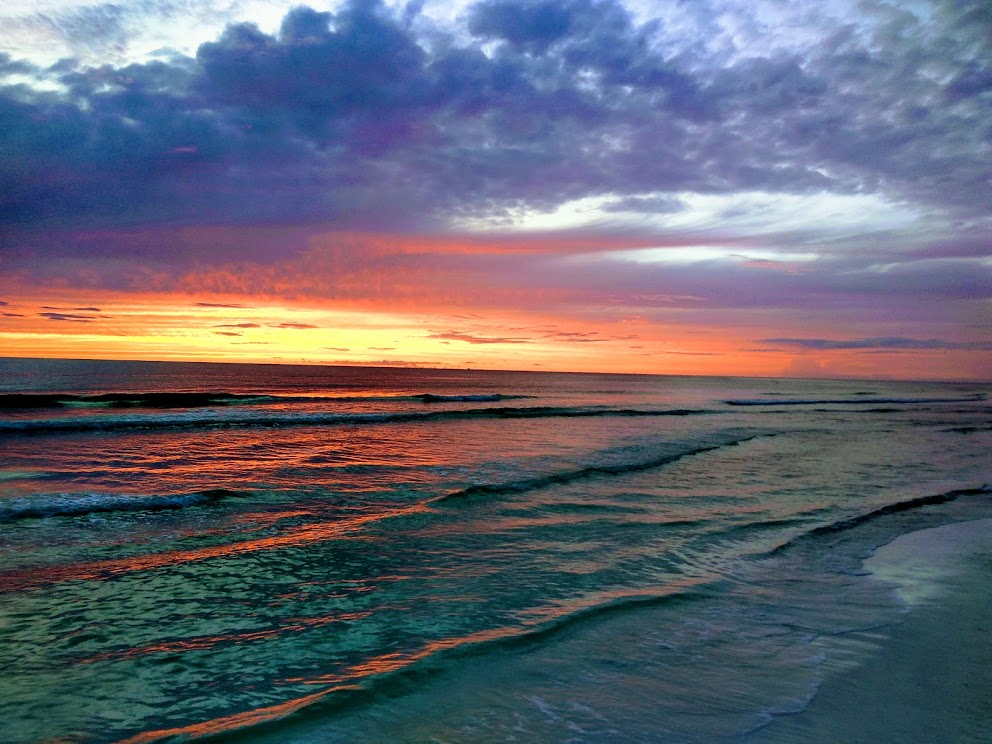 I highlighted exactly where I was for this image in the following illustration. 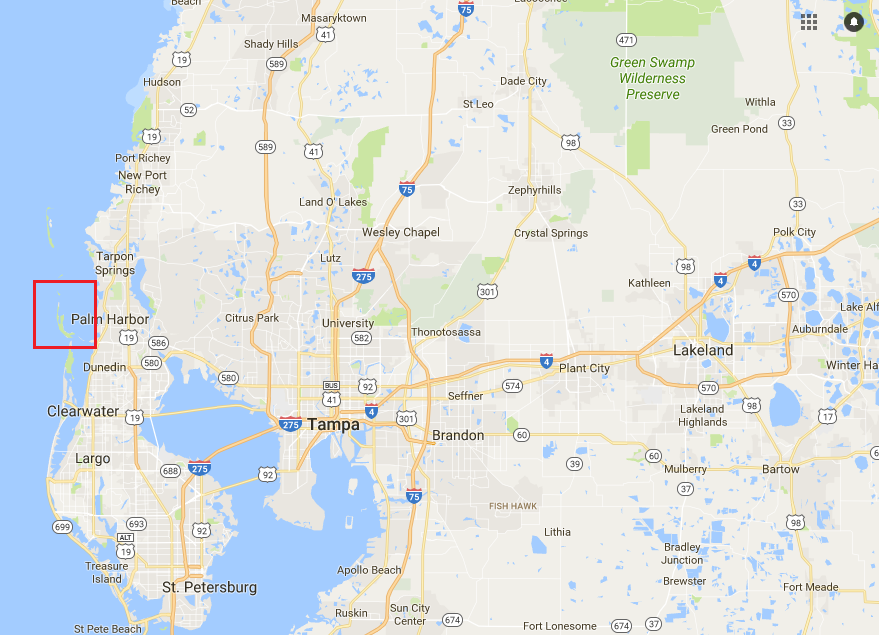 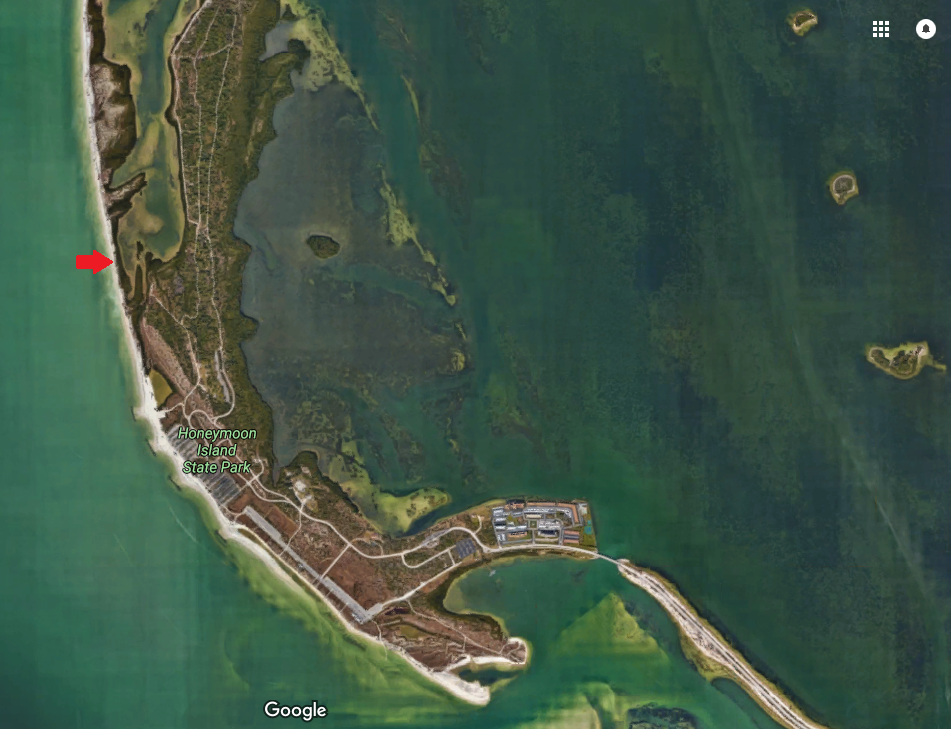 What is neat about this island is that it used to be connected to the island South of it, Caladesi Island, which is accessible by ferry from Honeymoon Island. It was cut in half by a hurricane in 1921, creating Hurricane Pass. The north tip of Caladesi which sits at this pass is the best spot for finding diverse wonderful shells, sponge, gorgonians and other neat sea stuff from the bottom of the Gulf.
Ironically, Hurricane Elena reconnected that island to another barrier island to the south in 1985 when it filled in Dunedin passage, and you can now walk to it from Clearwater Beach.

Really nice place to gather shells and enjoy amazing sunsets. If you snorkel the rocky tidal areas during high tide, you can find urchins and starfish and other critters abound, but not in the numbers they used too. When I first started to visit the island around 2008 or 2009, I could find urchins, shrimp, various large bivalves and gorgonians along the shoreline any time. Sometime around 2011 I think though, there was a crappy plan to fill it all in with nice white sand for about 15 meters in to be more attractive to tourists. Well the morons basically killed off the ecosystem in that entire stretch, and most of the shoreline eroded out to sea anyways. It was a horrible waste of money IMO and a short sighted destruction of the natural ecosystem.

They had to move the concession building much further in due to it being too close to the sea eating it up.

Anyways, I just wanted to show people if they are visiting the bay area, that Honeymoon Island of Dunedin in Pinellas County is a wonderful place to visit for all the fun beach activities one would want to enjoy. The island also has miles of hiking trails, and a dog beach where your fido can frolic in the water together with you.

Visit Florida today! Before Irma does something else to this island...

Some videos of the island, recorded by other visitors.


I actually collected water from this shore to start my reef tank. I tested it and all the nitrate and phophate levels were adequate, the ph was good and it was clean. Seeded the tank real nice with tiny copepods and gastropods. The first fish I put in already had a natural source of food growing in the tank.
This video explains that project they did where they put the sand in.

posted on Sep, 4 2017 @ 12:16 PM
link
a reply to: Jefferton
There is no housing on Honeymoon Island. This is the travel forum. But if you want to rent a place out here for certain times of year , we can like.. you know negotiate ....

posted on Sep, 4 2017 @ 12:57 PM
link
Honeymoon island is great. I lived in safety harbor for five years and spent a butt load of time there. I live in NYC now. Quite the difference.

Caladesi is beautiful. The best thing about caladesi is that if you don't have a boat then you need to take a ferry. Most people in Tampa won't pay the ferry fee so it's usually pretty secluded. Beautiful beaches, beautiful sky.

posted on Sep, 4 2017 @ 10:15 PM
link
Living in St. Pete recently, we visited the dog beach alot. We were always warned NOT to walk to the island because it is infested with sharks-something all the locals know. However, it was a favorite spot during storms-could be really crazy and only for those that want to get away from all the tourists and noise. Hope to be living back there very soon. I am extremely homesick; especially after seeing your pics. Thanks.

People call Floridians crazy for living here. But I just think they have not experienced the majesty of our coasts and interior parks to its fullest! I frequent the island throughout the year as well as other beaches and islands. I will remember to get more photos as I visit. I really want to visit Ancolte Key again which is like two islands north and usually catch a boat from the sponge docks in Tarpon. The Dolphin tour was 40 bucks and they gave you a measly 10 minute! I don't see why they don't just drop people off for four hours and continue doing runs. AT least we saw dolphins.

We need to see Egmont Key as well. That ones just south of St. Pete. It has no improved facilities (no toilets). I can dig that just fine. But no snacks or running water either I believe. Like backpacking I suppose.

I hope to get back there asap-desperately trying. It is so beautiful-it feels like home.