I started the day posting on my Twin Peaks thread. This is important so give me a minute to explain:

There was an interesting scene early in the series where the protagonist is wandering around Las Vegas in a stupor. He has loss of memory and loss of identity, and appears to be solely guided by a supernatural force that allows him to hit several jackpots.

Now I kept myself out of casinos for a couple years as it became problematic. And a fool who mismanages money also finds himself in heaps of credit card debt! Yep, that's me!

So I went and had some breakfast in a local place and decided to try my luck on the way out. As a mocking gesture to the 'supernatural forces' that I blame for my own bad decisions, I emulated our Twin Peaks protagonist in selecting a slot machine to play.

Here's the scene, but you can begin at about the 30 second mark to get the proper frame of reference:


Notice how the protagonist is guided by an ethereal image of red and white zig-zags surrounded by flames.

So my stupid inside joke to myself was that I'd find a machine with some sort of trigger image--something red, black, and fiery!

I looked around and didn't find anything. I walked in the direction of the door and saw a quick display on a screen that looked very similar to this: 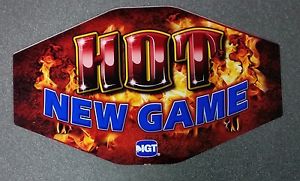 The image on the display changed in the blink of an eye.

I put in a 20 and thought I was making 50 cent bets. After about 2-3 spins I hit something big

Mistakenly, I was making 5 dollar bets!

Well, I'm not Mr. Jackpots really. I still have to go to work tomorrow and all that. It's not a life-changing win, BUT I now have enough to buttslam my credit card debt forever! I've been struggling to pay this off for a couple years now.


Eh don't sweat it. You followed your conscience and that's what matters. Any result beyond that isn't really in your hands anymore.

I've gotten refunds before I've mailed back shipments. I could've kept stuff and got my refund. I mailed it back anyway, stupid or not.

originally posted by: TheAlleghenyGentleman
I don't work for the IRS. Promise. How much was it, really. Asking for my boss

It's enough to buttslam my debts and have some security for a while. To me, that's a fortune.

I'm sure my win is just a drop in the rain to some.

I've never been ahead in my life so I'm feeling pretty good about it.

I'm glad to have the burden of debt taken care of, yes. But this being a conspiracy site, I wanted to share the uncanny way in which it happened.

I am definitely not headed back to the casino to try it again anytime soon. That kind of crap got me in debt in the first place.

Good on you man. Enjoy your good fortune while you have it 👍

Congratulations! Hope that CC debt stays far away from you now that you can pay it down.

originally posted by: AboveBoard
a reply to: NarcolepticBuddha

Congratulations! Hope that CC debt stays far away from you now that you can pay it down.

Keeping my bank card for emergencies and it's going away in a drawer to be forgotten.

is how you divine the future for yourself and others , albeit haphazard

Peace of mind is priceless, and glad to see you getting some breathing room.
Everyone deserves a break now and then.