After playing guitar for longer than a decade it is time for me to buy a professional instrument. I have always played a 500 dollar Ibanez and by playing more expensive guitars I know that in most cases a more expensive guitar is better instrument. With better I mean playabillity, constuction, hardware and everything else that can be made better. A better instrument will also help with improving my skills on the guitar. Being able to play faster, improve technique..and so on.

But there are so many brands out there and I am sure that much of the money spent will be just for the name it carries on the guitar. So I can use some help. I have some 2000 dollars to spent so a 1959 reissue Gibson Les Paul will remain on my wishlist.

The are some things I want this guitar to have.. I need my guitar to have a tremelo, a rosewood fingerboard, 6 strings, a stratocaster body shape, 22 or 24 frets and if possible stable in value. I prefer new but second hand will also be an option.

Any suggestions ...and why?

Spend A LOT of time in a guitar shop or 3 and try to ingnore the names but concentrate on a guitar that suits you as they are diferent in many ways.

Dont be afraid to talk to the guys in the shop and don't buy on the first time you go out as you want to get used to what will be your guitar for a long time and make the right decision.

Based on your stated needs, I would say go with a used Fender Strat.
You don't seem to prefer anything fancy like ebony fingerboards or odd frets. If you shop around, shouldn't have too much trouble finding one at a decent price and it should keep its value.

posted on Sep, 3 2017 @ 08:47 AM
link
I just bought a Les Paul black beauty, best instrument I've ever owned. I've got 11 guitars, never would I part with my 80s Kramer. If you like what you have get a higher end version. In that style look at ESP and Jackson, pure shred machines!

posted on Sep, 3 2017 @ 09:15 AM
link
Sounds like you need an older American made Strat. I have one and love it.
When I shopped for an acoustic a while back, I tried all of them. I had my mind set on a Gibson, but wound up buying a Martin. Everybody is different! I hate everything about how a Taylor plays and feels, but for others it's perfect.

I've never plugged one in to hear it 1st. Many years as luthier and teacher a professional session musician... I know it may appear crazy and sales persons think it is as well.. but I tear apart everything I buy the minute it gets home.

How it plays is my only criteria.. Why? Because it will sound different, better, worse, great, awful through every kind of amp, headphones and mixing board... so I don't care. But here is my criteria:

Straight neck, level rosewood fretboard and intonation inherently great out of the case. I always use the same criteria for acoustics, bass and banjos-mandolins etc.

Brands and cost are irrelevant to me as long as a necks straight, adjustable and inherently in tune.

posted on Sep, 3 2017 @ 09:24 AM
link
I have owned and played Strats and Les Pauls for years but always gravitate back to my Chinese made Washburn es-125 copy.

Guitars like people, have souls....expense and brands have nothing to do with it...

Also, 2 grand will buy you a hell of an Ibanez, as long as it's Japanese or US.

But yeah. Take your time. Play a bunch of them. Visit different guitar stores and don't forget: Geddy found his #1 jazz bass in a frakkin pawn shop.

I need my guitar to have a tremelo, a rosewood fingerboard, 6 strings, a stratocaster body shape, 22 or 24 frets and if possible stable in value. I prefer new but second hand will also be an option.

As others have suggested, just get a Fender strat. That's what I have, and I love it. Depending on what style music you play (and the sounds you want), you can get either three single coil pickups (SSS), dual humbuckers (HH, which is not really Strat sounding), or one with two single coils and one humbucker (HSS). I almost went with a HSS, but got a great deal on a beautiful black on black SSS. If you do get an HSS, try to get one with coil splitting, so you can still get the classic Strat SSS sound. But if you prefer something like a Les Paul with the fatter dual Humbucker sound, that's all up to you.

That said, go play some and see what you like.

Do you have a preference on scale length?
edit on 3-9-2017 by Liquesence because: (no reason given)

posted on Sep, 3 2017 @ 09:41 AM
link
My son's into guitars. He's taken my advice and spent time talking to staff in music shops and trying instruments out. He's also bought from the shops where he found the instrument, rather than going and buying from the internet.

posted on Sep, 3 2017 @ 09:53 AM
link
Fano guitars. Best guitars Ive ever played. Sure, thats maybe a little biased, but you wont think so if you play one. Ive been playing for 22 years. Of course, your preference for feel might differ from mine, but still, they are on another level of craftsmanship. Another option you might look at is a vintage gibson, but those can be 5 grand plus, whereas you can get a fano for 2-3.

If youre looking for a strat though, just get a vintage fender strat. Not my favorite, but some people love em.
edit on 3-9-2017 by pirhanna because: (no reason given) 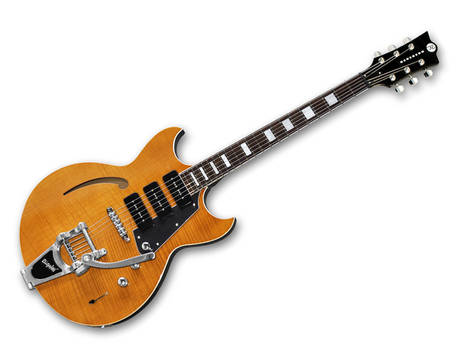 posted on Sep, 3 2017 @ 11:00 AM
link
I would stick with Ibanez! The Artcore semi-hollow bodies have a great pop from the resonance chamber and sound awesome for shredding with a nice thick timbre. They sound really great clean as well, it would be interesting to mic the hollow body and mix the mic over the pickups too, something I want to but haven't done yet.

The only other guitar that I really, really loved more than my Artcore are the higher end Fender Stratocasters, but they can be in the $5-10,000 range for the ones that blew me away.

Good luck in your selection and keep those fingers bleeding!

posted on Sep, 3 2017 @ 11:14 AM
link
Well it sounds like you know what you want! I had a Strat and i just couldn't get the sound i wanted with it. then i got an Epiphone Les Paul standard and wow i could play just the way i wanted to and a Marshall valvestate amp! Its a heavy guitar and worked perfect for the style i was playing, sludge, doom stoner metal ala Melvins etc, but I've moved to a more extreme type of metal and a Jackson v is lighter and with an "Orange crush" amp I'm playing much faster and shredding seems easier
I've been playing for 44 years and the way i purchased my guitars was to play play play until i was sure thats was what i wanted! I don't use much effects just a good balance between overdrive and gain and distortion, echo etc
I tried a Floyd Rose tremolo and found it difficult to tune especially quickly on stage I also use a Yamaha acoustic that sounds beautiful! so my advice fwiw is play and play something till it feels comfortable to you! to me it's not so much the guitar it's who's playing it

Keep going and always have fresh strings!
edit on 03 08 2017 by TimHeller because: spelling correction

posted on Sep, 3 2017 @ 11:27 AM
link
Spend as much time and put the same amount of thought into your choice of amp. The best made, most expensive guitar in the world will still sound lousy played through a gash quality amp.

Loads of suggestions...but the main thing is...find one that "feels" right to you. Go to a guitar shop (preferably a smaller one in the area not a chain store) and tell the guy what you want, and that you'd like to play a few. And when you play them, play them for a while...not just a few chords, licks...sit down and get the feel, check the response on the pots, do a few dive bombs on the trem.

So if you play 5 or 6, try to narrow it down to 3 that feel right. Then of those 3, see what you like/don't like about them.

Buying a guitar is a very personal experience, at least for me. I can't just go into it without playing a bunch of them first and making my decision based upon that.

What Ibanez? My s470 plays as good and sounds a good as any guitar out there. Besides, it matters more what type of music you play.

If you play all kinds, you can never go wrong with an American strat. Get different pick guards for it with different pickups and some nice locking heads and you're all set.