North Korea claims to have hydrogen bomb for long-range missile

North Korea claimed Sunday that it had developed a hydrogen bomb to use with a long-range intercontinental ballistic missile (ICBM).

The Korean Central News Agency, North Korea's propaganda arm, said that that dictator Kim Jong-un inspected "an H-bomb to be loaded into [a] new ICBM" during a visit to the North's Nuclear Weapons Institute. Photos accompanied the statement showed the purported hydrogen bomb being developed in a lab.


North Korea claims to have hydrogen bomb for long-range missile

If true this raises tensions higher than ever

I hate to say it-but maybe it's time to blow them up before they really have something. I hope for a strategic hit and cause as little damage to the poor citizens as well as SK as possible. I think Trump's about to do something anyway-and beware the repercussions and get your money out of stocks asap.

posted on Sep, 2 2017 @ 08:50 PM
link
N. Korea dug a big hole in the ground. Filled it with everything they had that would go boom . Set it off and claimed it was an underground test of an H-Bomb . The only thing they forgot ? Residual radiation . Satellites detected none .
Folks forget recent history..

posted on Sep, 2 2017 @ 08:55 PM
link
a reply to: Justso
Well I tend to agree. If they wanna keep playing tough and thinking we won't because we can't wipe out a populated area , it's time to show them who's boss.

Time to think about our own citizens before he's gone and done it.

I don't doubt they're bluffing, but you can't rule out they want you to think they've not got any. Surely they aren't that dense?

originally posted by: violet
a reply to: Gothmog

I don't doubt they're bluffing, but you can't rule out they want you to think they've not got any. Surely they aren't that dense?


What I posted is history....recent history.
They are just "shootin off that mouth" again
Talk is cheap , takes money to buy land.

Of all the things that I worry about, North Korea don't make the top ten.
edit on 2-9-2017 by Leonidas because: (no reason given)


Then when he is taken down, and others get involved, all hell breaks loose.

Yes, Thought alot about what makes Fat Boy continue to poke us and others. Either he is crazy or being used by others to start a war or? After awhile, and it has been years including before with his crazy father-instead of waiting for his threat to come to fruition, which it could, we may have to do something-and I hate it. Lives will be lost-horrid.

I think that orbital tech is still secret,like whatever they are shooting with HUGE ground effects that our enemies claim is THEIR industrial accident...

I think Kim likes to talk a big game but that's about all he's got. Talk.

The person you need to worry about isn't the one who takes time out to give a speech about how they're going to beat you up. If someone really wants to smash you in the melon they do it, they don't talk about it or tell you it's coming. They let you figure that out when you wake up in the hospital.

Kim feels threatened. He's afraid of invasion so he's fluffing his feathers. He's not in a position to pick a fight with anyone.

Give him space. Let him chill. Make it public too. Let him know that everyone knows he has nothing to worry about and to relax. Also make it public that the rest of the world wants him to stop being such a dick and life will get easier. But do something stupid and he's all alone against the world.

posted on Sep, 2 2017 @ 09:35 PM
link
What possible benefit would blowing up a nuke in another country have for North Korea or Jong-Un? If anything it would be the death of them and I'm pretty sure they know that.

If Jong-un is as power hungry as we are led to believe then the last thing he would want to do is lose it by nuking another country. This leads me to believe this is all Cold War type propaganda to make people afraid and malleable.


North Korea claimed Sunday that it had developed a hydrogen bomb to use with a long-range intercontinental ballistic missile (ICBM).

The Korean Central News Agency, North Korea's propaganda arm, said that that dictator Kim Jong-un inspected "an H-bomb to be loaded into [a] new ICBM" during a visit to the North's Nuclear Weapons Institute. Photos accompanied the statement showed the purported hydrogen bomb being developed in a lab.


North Korea claims to have hydrogen bomb for long-range missile

If true this raises tensions higher than ever

Lil buddy is third generation leader of north Korea.
That's usually when a company goes out of business. Grandsons tend to be full on retard.

He's probably just dumb enough to think he could win.

I guess he doesn't have advisors or a huge team of his people there helping to guide him? I'm sure he does, he doesn't run the entire country by himself.

I wouldn't even be surprised if Jong-un is just a puppet and face to place blame on instead of the ones really behind it. Jong-un seems more like a spoiled brat who is unable to run anything much less a country. He's like one of those royal kids who becomes king but doesn't actually do anything except hold a title while the ones who murdered his father run things behind the scenes.
edit on 9/2/2017 by 3NL1GHT3N3D1 because: (no reason given)

posted on Sep, 2 2017 @ 10:01 PM
link
Is that an old printer cable/scart lead brazenly dangled and not plugged into anything? Gotta admire the way they mish-mash old computer components with moulded plastic shells for photos. 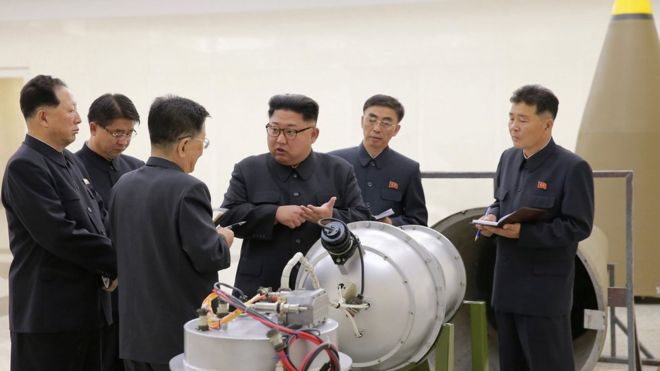 From the look of that photo and expression, I imagine Kim asking when it will be ready and demanding that it be ready...

posted on Sep, 2 2017 @ 10:01 PM
link
Just a game to see whom flinches first. NK will not really do a thing until the US accidentally fire on them first. Then they can claim the US started it and launch a self defense tactic. The US is waiting for NK to strike a target first and use it as an excuse to launch a full scale assault.

me personally am wiating for a Pearl Harbor event....
And what will Russia and China do considering they border North Korea?


Edit: I realize they have smart scientists/Engineers. But C'mon, we all know they had outside help.


This boat was seized by US authorities near cuba in 2014. From North Korea, it hid weapons under sugar. 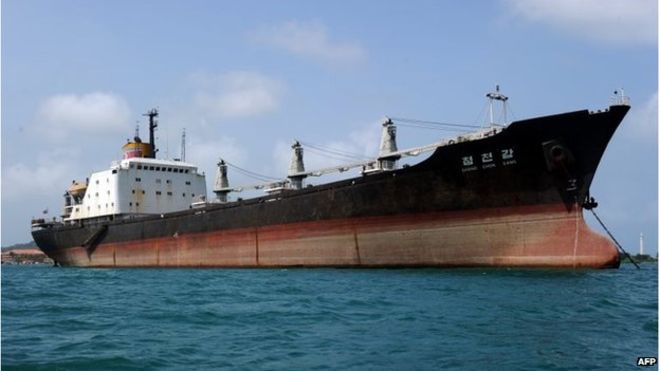 I always wondered...
Can North Korea put these on the deck and fire them from 500 miles off the coast. 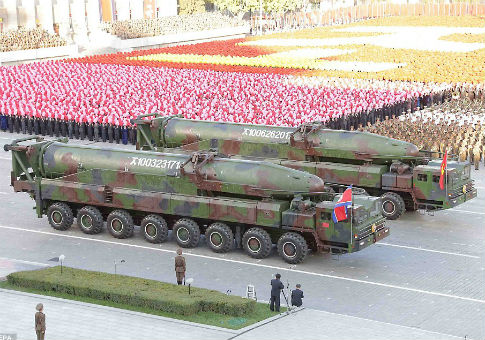 Heck why not drive right up to San Francisco or Catalina island.

They would have attempted already if they meant all that rhetoric.🙄
edit on 2-9-2017 by Bigburgh because: (no reason given)

No one destoys what they covet.

And from there? After an EMP? The people in the USA will weed themselves out - and then, some other authority will step in.