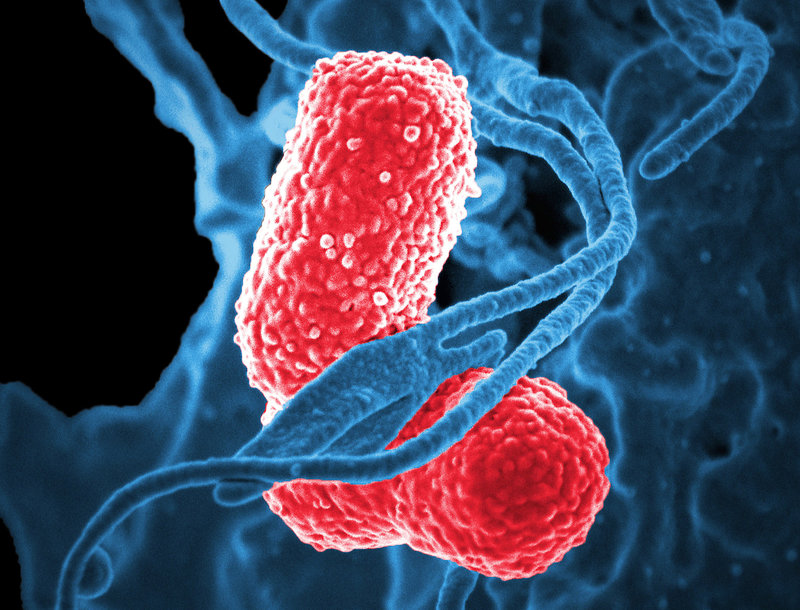 Doctors in Hangzhou in southeastern China have detected a a type of pneumonia that is both highly drug-resistant and very deadly. It also spreads easily.

The bacterium — a type of Klebsiella pneumoniae — killed five people in an intensive care unit in Hangzhou in 2016, researchers reported Tuesday in the journal Lancet Infectious Diseases.

The microbe can fight off all drugs available in China, Chen says. "We don't have anything in China to stop it," he says. "There is a drug available in the U.S. that should be effective against it, but we haven't tested it yet."


Eventually, one of these is gonna get us. Let's hope that isn't the case now.

In the past three decades, two types of K. pneumoniae have appeared in hospitals. The first is a drug-resistant form, called CRE, which can fight off even the toughest antibiotics. Last January, this type of pneumonia killed a woman in Nevada. That strain resisted 26 antibiotics.

The second type of K. pneumoniae causes a very severe form of the disease and is known as "hypervirulent."

"The disease progresses very fast," Chen says. "It starts in the lungs and then infects other organs, like the liver."

This hypervirulent form — which is widespread across Chinese hospitals — causes more damage to the body than other strains do. It can spread through communities. And it can even sicken young, healthy adults, Chen says.

For years, doctors feared the two types would one day combine. And now that it has happened, scientists around the world need to be on alert for these triple-threat strains, researchers at Rutgers University write in a commentary about the new study.

"Their study describes an alarming evolutionary event," epidemiologists Liang Chen and Barry Kreiswirth write about the emergence of this worrying pneumonia.

Where did you read virus?

It can be bacterial or viral.

Thx you for this, I have a friend that is prone to having to get shots for this, but it's the normal type not this type thx God.

Definitely something to watch out for.

originally posted by: DEANORULES24
a reply to: loam

Pneumonia is a major symptom of an infection or irritation in the lungs leading to excess mucus production, coughing, chest pain, fast heartbeat and feeling drained/tired due to lack of oxygen in the bloodstream. Even chemical irritation of the lungs can cause pneumonia (like cleaning a bathroom with strong cleaning chemicals and breathing in the fumes).

Virus infections and bacteria can also cause pneumonia. You can eat something and it goes down the wrong way - that can give someone pneumonia. Or sweeping out a basement flooded with sewer water.

This is a test, how fast can our new bug spread in a nice clean environment.

originally posted by: DEANORULES24
a reply to: loam


Lyme disease can cause it

"Viral pneumonia is pneumonia caused by a virus. Viruses are one of the two major causes of pneumonia, the other being bacteria; less common causes are fungi and parasites. "

The bacterium — a type of Klebsiella pneumoniae — killed five people in an intensive care unit in Hangzhou in 2016,


Immune systems are weakened, making the host fertile ground for infection, not just Pneumonia, but that is the most common form of death with severely injured, sick and old people in Hospitals.

The already weakened patient is unable to fight off the infection, regardless of how many antibiotics they try. In fact all those drugs probably have a net effect of harming the immune system even further.

None of the staff was affected presumably, because they are young and healthy.

The most prevalent cause of death in old people is pneumonia, contracted during prolonged hospital stays, either for other conditions, or general old age. The lungs fill with fluid and you drown.

So we got that to look forward to.

Medicating to combat a bug before it is a problem, sometimes is just what the bug needs to make sure it survives and thrives.

Good hand washing with soap and water, being active, eating nutritiously, organically, and locally, staying away from any pills that you don't have to take, is a good way of keeping your immune system healthy.

A good immune system will keep those nasty bugs at bay, reduce sick time, and will reinforce your body's natural immunities.

Indiscriminate use of medications and antibacterials is what causes these problems in the first place.

They don't know much about ST11 CR-HvKP but these are some points from The Original Article, @ The Lancet:
- So far only 5 patients have been confirmed to have been infected with the new bacterium.
- All patients that contracted the new strain were not healthy individuals: they all had multiple trauma, they all had surgery, they were all in a medical induced coma in an intensive care unit and, obviously, they were all on mechanical respiration.
- They contracted the bacterium in ICU.

Scientists have found ST11CRHyKP develops a mucoid outer layer which helps it stick to surfaces, such as tubing and catheters and that's how they think it infected those patients. But they are yet to confirm whether it can be transmitted human to human, hence they are suggesting control measures to stop it before it spreads (and because the bacterium is able to reach the bloodstream to infect other organs).

As medicine advances, bacteria and viruses do too and even though we will probably never rid of them, we always seem to be one step ahead, thanks to research. However, I believe good practice can help reduce the risk of infection, and by this I mean: cover your mouth and nose when you sneeze, wash your hands thoroughly, clean surfaces.

posted on Sep, 3 2017 @ 08:27 AM
link
i dont know why we dont mandate high quality facility wide use of air filters especially in old folks homes and hospital units where vulnerable patients are stationed.


anyway, supposedly nothing can become resistant to natural products so silver, garlic, various essential oils like Oregano are supposed to be good (be careful with that one its like swallowing one of the nine gates of hell).....also there is a story that Thieves essential oil was used during the black plague by....thieves....they soaked their face masks in it and wrapped them around their mouth and nose and the story goes that no one that did this contracted the plague...

i reckon there are lots of natural substances from which no virus or bacteria can become resistant....

So true, that is why it makes no sense to try to outdo nature.

The secret is in working with nature, not against her.

She can be one formidable foe.