posted on Sep, 2 2017 @ 01:34 PM
link
When I think of the one thing that has plagued and continues to plague human belief systems, and the psychodynamical processes they emerge from, it is the term "dissociation", and its tip-of-the-iceberg sidekick, idealization. 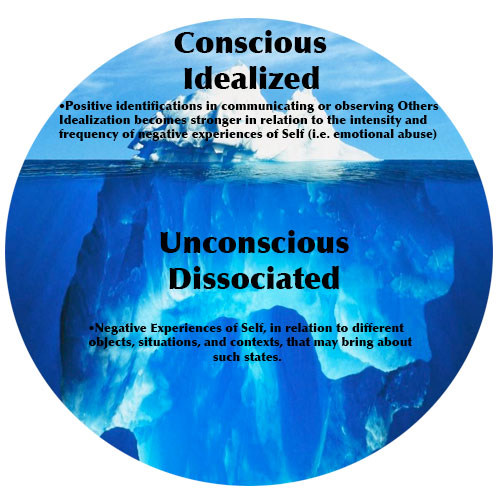 Ignorance is bliss they say, and perhaps it is - from this perspective of things. But nevertheless, truth is simple, coherent, and complex, with the complexity being coherent through a self-similar modus-operandi, or what's termed fractal-dynamics. Hence, truth is simple.

Why is ignorance said to be blissful, btw? It must be because knowledge is real, insomuch as some people are downright afraid of it - afraid of meaning, or meaning which contradicts their own brand of making-meaning.

But how can knowledge be real? Does it exist in some 'heaven' like Plato thought? Or is it more in the mode intuited by the Great Aristotle, as a potentiality which emerges from out embodied being? Science answers on the side of Aristotle, but adds to the picture the notion of symmetry - or symmetry between physical and dynamical systems which have co-evolved in one another's presence, and hence, there can be nothing more truthful than the claim: human minds are dyadic: they only function properly in situations of safety, and become something entirely else in contexts of threat.

Hence, the dissociation disorders which plague nearly every soul on planet Earth today. It is so simple - isn't it? Is it not obvious, bloody, downright blatant, that this is how our brains work? Oh, yes. First things first: you have to accept the epistemological superiority of science and reason over mysticism, religion, magic and revelation, to recognize how utterly true this statement is. Indeed, I feel downright gleeful knowing that stripped away of all the theatrical romanticization that religion puts around human experience, that the quality of love, or centripetal motion, reaches its acme in the human condition. I love knowing that I feel free to think in ways that other people, so governed by clichés, cannot think; and not for reasons why I would feel compelled to demonize them for either.

I may hate, and get frustrated, and sometimes find myself utterly despising the arrogance, self-righteousness, and presumptuous assumption of knowledge that others often take into conversations with me - but knowing what I know, which is truer than the spiritualistic fantasies other people reflexively assume, that Jesus' statement of "they know not what they do", is surprisingly true (though he wouldn't have been able to describe just why that is).

Compassion, or understanding, seem to me to be symmetrical phenomena. Think about it. If I know context and background and life experiences and chance interactions underlie the probabilistic functioning of your brain-mind from one moment to the next moment, what room is their in me - or anyone who understands this - to become a cynical, closed-hearted, and dismissive of the others they interact with? Granted - venting, as I am somewhat doing in this post - is understandable, inasmuch as it is pretty lonely being so ahead-of-the-curb, and basically understanding where science and human understanding is headed if we keep to the enlightenment process started in the late 1700's, and follow where reason leads us.

But again, who can comment on these things? Who, other than very well read people, are able to know just how much they don't know? Knowledge is real; but so is confabulation. For instance, when I talk to someone and they speak very fast, and very animatedly, and they also happen to be poorly educated (a cousin of mine), it is inevitable that the thoughts and ideas, claims and assertions about what is real, will be mostly poorly-thought out extemporized efforts to 'make sense' of what they feel in them moment as they talk to me. The conversation, in this sort of mode, is anything but equal: the need to speak and 'make sense' for such a person overrides the needs of their interlocutor; and hence, the entire structure of the interaction is off-kilter, asymmetrical, and an exercise in vanity - for the person who speaks and thinks this way.

Thinking - effective thinking - cannot occur without a non-stop conscious monitoring of your moment-to-moment experience, yet, some people are so jaded and out of touch with the value of thinking i.e. they may have become "antonymized" by a counter-thought which has earlier presented thinking, reason, and self-consciousness, as bad: and hence, when such an assertion is made, the assertion, like a metacognitive police-state, intervenes not merely as a thought that discloses itself, but as a feeling which become sinternalized in the body itself, 'reacting' to the meaning forms from the outside world which challenge the coherency of the accepted belief - the very 'god' which the person needs to be happy.

Do you see, if you get brain-evolution, and the biosemiotics dynamics which build up human minds, how utterly deluded most of us are - that we accept feelings because we've assumed an epistemological standpoint that literally closes off all analysis of the value of the knowledge-we-assume about reality?

Yikes! Dualism - dissociation - and Idealization, is truly the root-of-all evil, because it is the reflexive reaction to emotions that occur to us, which we ignore the cause as being related to something that once happened to us, which generates the over-determined responses we have to people who threaten us in ways which we don't even know, because we believe, wrongly, that we have nothing to learn.

I cannot but marvel at human history and the amount of bull# that it has spawned. It can make an atheist of anyone; it can make you jaded towards all religion, and even spirituality. It could seem to warrant a dissociative skepticism that never allows feeling any place into human experience, since it is unregulated and unmonitored feeling, which is assume to reveal "truths" about reality, which seems to be the root of the delusional process. Yet, being cognizant of homeostasis, and the aim of our dynamical system towards 'coherency' - which is the middle path - that such an interpretation comes off as extreme, because it is not emotion, but unreasonable emotion, that is the problem. It is not love, or the fact that love organizes us - but rather, the MYTH which comes to REPLACE the FACTS, which renders human beings into the equivalent of toddlers, relating to the world in ways that are assumed to be well-provisioned by what one "feels is true", which makes people crazy and insane. And - above all, stands to destroy the very metaphysical counterpoint to whatever point the universe has in the existence of the planet Earth: to be, to discover, and to explore.

The most obnoxious belief systems are those which profess perfect knowledge - that the universe is 'figured out', and that the people who have "figured things out" don't even bother wondering or asking what sort of incentives could underlie their believing reality works the way they claim it does.

Elites - of which this site is probably funded - are not objectively rooted people, holding to anything that could be regarded as "coherent", or "unmotivated by gain". Again and again and again, half-educated people pursue imaginary fantasies that are birthed by the very physical conditions that contextualize the unfolding of their views on reality. Yet never do they gain a vantage point on themselves.

Your explanation of this subject seems familiar to me. As in, I am aware but not in a way that I have read before or taught to me. It just seems to be something I understand as you have explained it.

I was going to give as long winded a response as your self-absorbed diatribe here, however, I'll just succinct it with this. It's ahead of the curve not curb, as in ahead of the bell curve. You're ahead of the curb I guess you're just not getting head stomped or curb-stomped but you might as well be. You mentioned Jesus's speakings in the same vein as science is superior to religion and spirituality I hate to burst your bubble but most philosophy is vastly superior logically speaking and within the frames of reasoning than most scientific paradigms and most religions and religion can be considered a type of philosophy depending on how it's approached.

Why don't you ever stick around for the Q&A session after these posts?

Astrocyte ???? As a fellow member I would like to point out that ATS is a discussion forum. Actually the experience can be very entertaining as was as being an opportunity for each of us to learn from each other.

A point being that a Discussion Forum is an interactive experience.


The matter of "Symmetry" as you seem to be describing. Does seem more considerate that, the underlying order to our apparent construction at the molecular scale bespeaks of an order consciousness should conform to. The idea that it does not seems (IMO), to present to you, suggesting that, there is something inherently wrong with the human condition.

In consideration if that was correct then why is it that a baby has no concept of such an order as you are describing?

In my opinion you are incorrect. Nature is inherently a developmental process that allows for Consciousness to evolve.

Not Really Heaven or Hell

The Underworld is not entirely unlike Heaven/Hell, but it's not the same, either. The Underworld has the glorious area known as the Elysian Fields, which is similar to Heaven. Some Romans tried to make the area around the burial site of prominent wealthy citizens resemble the Elysian Fields ["Burial Customs of the Romans," by John L. Heller; The Classical Weekly (1932), pp.193-197].