posted on Sep, 2 2017 @ 12:00 AM
link
The purple haired girl looks like she just sllced a huge hunk out of the blue haired girls neck.

originally posted by: theantediluvian
a reply to: Tempter

You're an enthusiastic supporter of Donald Trump and *this* triggers you? Yikes.


I can't believe it took you this long to mention Trump.

First, you spelled it wrong. Second, I would have to see Descendants I to know the context.

I find it odd that it took anyone this long to mention Trump and even stranger that this Disney franchise was not blamed on Obama.


originally posted by: Zanti Misfit
a reply to: intrepid

Kid in the back looks native or Chinese to me.

That one in the back is the Disney generic everything else. Can't tell if it is a male or a female, the ethnic origin is dubious but what ever it is is is the rougher charactor, prone to betrayal yet always come back at the end as he, she ,it dies in the arms of the girl with the purple hair kind of charactor. Disney always uses that type.

The actor in the back is Asian, Native American, Scottish and Russian and the character is middle eastern. Seems to fit the everything else category.

The white haired character's mom is black so I guess he is supposed to be mulato and the actress that plays Evie, the dark haired girl, is latino.

Part 2 has an afro-american actress playing the part of the daughter of little mermaid's villein, Ursula.

As said before, the main idea of the story is don't judge a book by its cover. Seems like a standard fairy tale moral.
edit on 2-9-2017 by daskakik because: (no reason given)

If THIS triggers you, stay the hell away from Japanese kiddie anime. You'd strangle yourself clutching the pearls so hard.

Have you seen the movie? Do you even know what its about?

The sentence makes sense if you consider the story.

They are the children of the fairy tale villains. They eventually turn to good. There is a kids movie between the two points.

Power rangers was never only for 5 year olds though. Beyond that I watched the new one with my 5 year old and we both loved it.

What age group do you think the above is for ?

I can't believe it took you this long to mention Trump.

What can I say, I watched too many Disney movies growing up apparently. It's turned me bad, got me all twisted inside and filled with darkness. Long live evil. Muahahahaha. 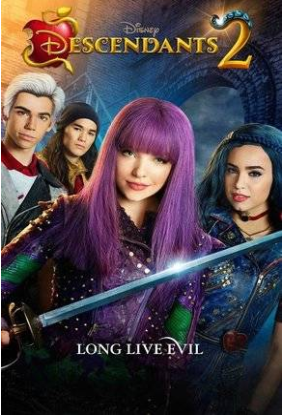 It is even spelled out in front of you, and you see nothing wrong?

I do believe a few have already said that they don't.

originally posted by: daskakik
a reply to: 3daysgone

I do believe a few have already said that they don't.

originally posted by: hopenotfeariswhatweneed
a reply to: 3daysgone


I agree it is trendy, but resistance is only futile to the blind.

Well, we can all see it, but we don't all see it the same.

Watch the movie and you should also see that it is the typical fairy tale with the typical moral and more dance scenes, because Footloose taught all of us that dancing is not a sin.