Is this evidence of Chemtrails?

posted on Sep, 1 2017 @ 06:55 PM
link
Q: What replaced the attention of top scientists from the Manhattan Project?

posted on Sep, 1 2017 @ 07:00 PM
link
I've seen contrails for decades, but never something like that that is so neatly "on and off". Whether or not regular contrails form depends entirely on warm the air is at that altitude. But we can't really say from a single video.

It might be air temperature differences. The pilot might even be starting and stopping the fuel to the engines.

You would really need to do laser chromatography to prove that there were chemicals in the contrails.

posted on Sep, 1 2017 @ 07:10 PM
link
My initial thought was some form of sky writing, but that's normally done at a lower altitude and dissipates very quickly.

The sequence of off and on to make the lines is very precise, so we can assume it was wholly intentional, but for what purpose I could not say. I can't see it being natural, the lines are almost identical in length, as are the gaps in between, so I think we can discount temperature and pressure fluctuations.

It might be air temperature differences. The pilot might even be starting and stopping the fuel to the engines.

You would really need to do laser chromatography to prove that there were chemicals in the contrails.


You can't use "laser chromatography" for that. Laser micro-pyrolysis gas chromatography mass spectrometry, the full technical name for the procedure requires a capure of the material so it can be pyrolized before being subjected to 1064 nm laser radiation . From the ground you might use visible light photo-chromatography. And as a commercial pilot with several decades of flying jets at airline flight levels, I can assure you that no one is going to be turning fuel on and off at 40,000 feet. If you turn the fuel off, the engine flames out. In order to relight the engine, on my 747-400, you would have to descend to below 30,000 feet and slow down to less than 250 knots IAS. The most likely explanation for the intermitant contrail is an undulating isotherm. Even at a constant pressure altitude, the temperature can vary quite a bit. The autopilots we have can hold altitude different ways. One is a true altitude hold which maintains a constant pressure altitude, which may or may not reflect actual absolute altitude. Above 18,000 feet, all aircraft set their altimeters to reflect a sea level pressure of 29.92 inches of mercury (or 1000 millibars, if you prefer.) An alternative is to set the mode to Mach number hold. If you are going to do that, you have to get permission from air traffic control to occupy a "block" of altitude since mach number is a function of temperature and your aircraft is going to be acting like a roller coaster going up and down to maintain a constant mach speed with varying temps. If you select pressure altitude hold mode, you have to keep an eye on speed, so you don't exceed mmo with a big temp change.

posted on Sep, 1 2017 @ 08:26 PM
link
Hey op...spot on my man, hail i have a video of them inside the aircraft doing it ...military btw....showing up close a remote seat with the switches marked video of two turbines and the outlet......so they could view the action from that small console...had its own jump seat though

the boudaries at the contrails endo.....thats craft for end.....the endo is mechanically clipped...as we dont get that definate of a cut from atmoshere ripples.....then we have the symmetrical interval.......tell me somebody

originally posted by: GBP/JPY
hail i have a video of them inside the aircraft doing it ...military btw....showing up close a remote seat with the switches marked video of two turbines and the outlet......so they could view the action from that small console...had its own jump seat though

That's kind of what I was thinking, they cut off so sharply, so perfectly, the ends were clearly defined, unlike what I've seen before. If you are at liberty to share the video you mention, would be very cool to see.
edit on 1-9-2017 by InterstellarSloth because: (no reason given)

You'd think if somebody had the "smoking gun" proof of chemtrails then they might actually post it, rather than just making an empty claim. Always the way isn't it?

As for the OP video, as others have said it is just variations in humidity. See the clouds right at the end of the video? They also have regular gaps in them, it's exactly the same deal.

The flight in question was an Ethiopian Airlines flight from Washington DC to Addis Ababa, passing over Halifax, Nova Scotia. Chemtrail believers should ask themselves why an Ethiopian passenger plane would be spraying "chemtrails" over Canada!

posted on Sep, 3 2017 @ 03:37 AM
link
Sorry for bursting the old chemtrail bubble, here is the scientific explanation for these contrails:

The only argument that would change my mind is a good [as in trustworthy] laboratory making actual measurements from the trails themselves and finding untowards chemicals. Anything else is just flat earth coo-coo rubbish. 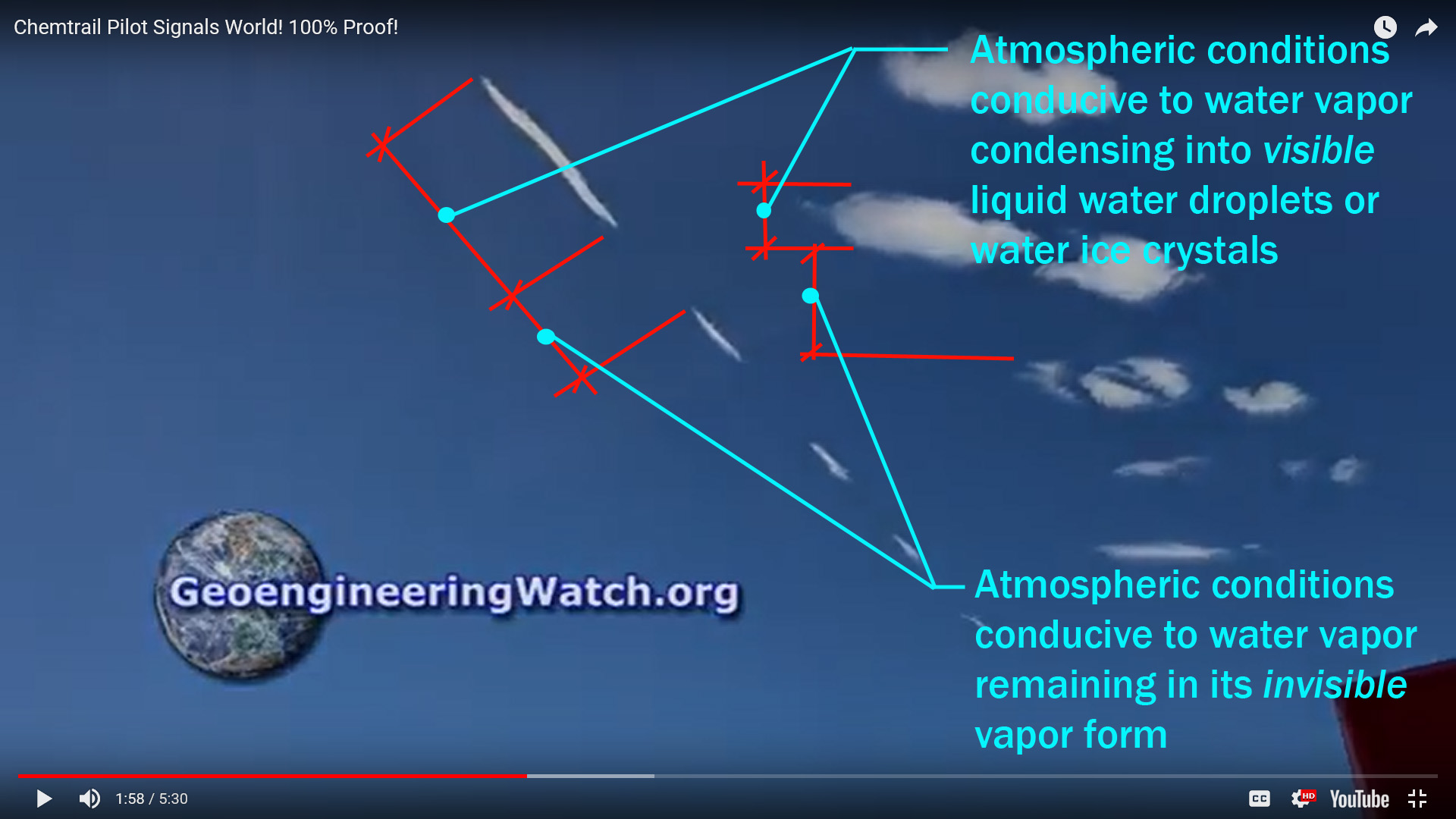 In the image above, when I wrote "atmospheric conducive to water vapor condensing into liquid water droplets or ice crystals", but to clarify, I mean that the right relative humidity and/or temperature conditions exist for this to occur, although other conditions also need to exist.

For example, a nucleation point may also need to be present.

However, if the relative humidity and/or temperature is not conducive to the invisible water vapor (water vapor that is ALWAYS present in the sky, even on a completely clear blue-sky day) condensing into visible water droplets, then that won't happen even if there is (for example) a nucleation point.

Other relative humidity and/or temperature conditions need to be present, and those conditions can vary greatly over a very localized patch of sky.

And that temperature and humidity vary - even over relatively short distances - at altitude as well as at ground level.

And that some people who dont understand contrails, clouds or anything about weather and the atmosphere get their kicks by misleading others

posted on Oct, 7 2017 @ 12:04 PM
link
I was photographing the planes at manchester Airport, UK yesterday and i obtained 100% cast iron proof that they have now stepped up chemtrailing over the north of england. As you can see, they are now leaving, not mere ordinary chemtrails, but new super duper HD ones!!! They're trying to make sure the new 4K video gets them really clear. 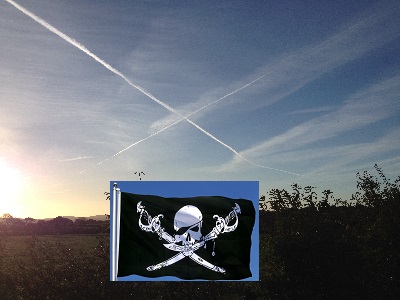 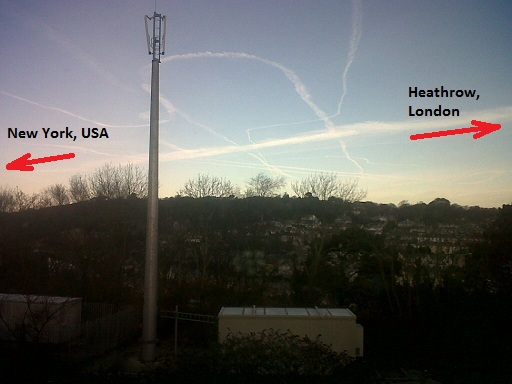