posted on Sep, 1 2017 @ 08:18 AM
link
Russia and now France has come out with 'danger' North Korea a major hazard. Putin had a visit with North Korea not long ago what did they discover that's suddenly got them seemingly panicked? What about their allies?

“The situation is extremely serious... we see North Korea setting itself as an objective to have tomorrow or the day after missiles that can transport nuclear weapons. In a few months that will be a reality,” Jean-Yves Le Drian told RTL radio.

“At the moment, when North Korea has the means to strike the United States, even Europe, but definitely Japan and China, then the situation will be explosive,” he said.

Not only is it verified by the alphabet's,

The threat is vocalised and aimed at the USA in particular. Although Australia copped a threat fest from NK for sending 25 men to the current exercises.

The one with the trigger finger. We're about to find out who's bluffing and who's not.


originally posted by: ADSE255
North Korea isn't backing down on their lust for war and domination. 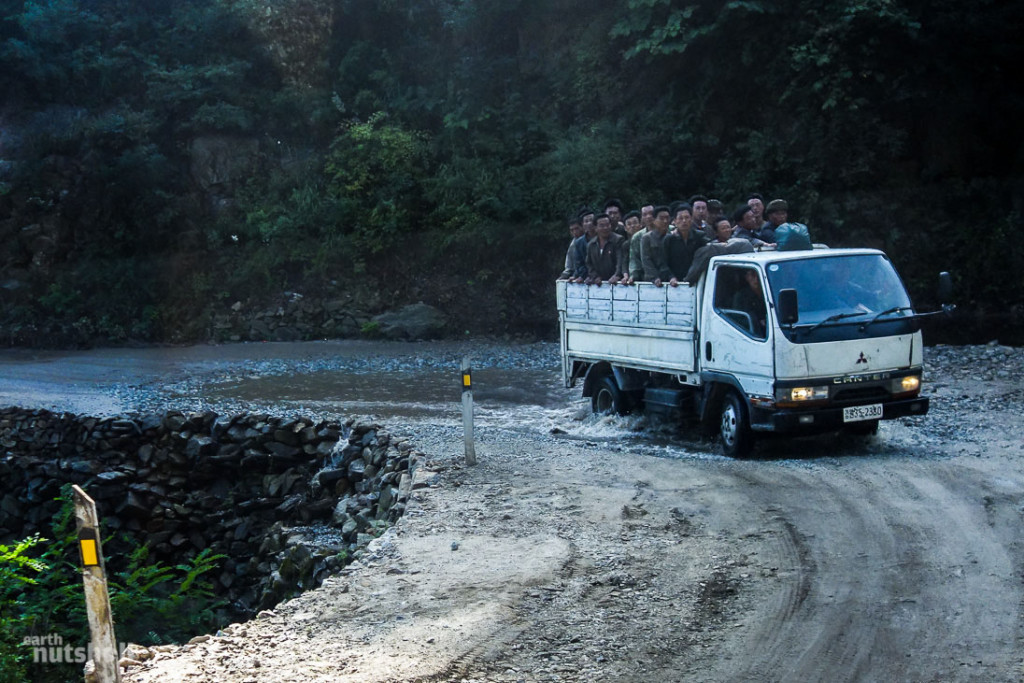 MOSCOW (Reuters) - Russian President Vladimir Putin warned on Friday that the tense standoff between North Korea and the United States was on the verge of large-scale conflict and said it was a mistake to try to pressure Pyongyang over its nuclear missile program.

Putin, who is due to attend a summit of the BRICS nations in China next week, wrote in an article published on the Kremlin’s web site ahead of his trip that he favored negotiations with North Korea instead.


North Korea has been working to develop a nuclear-tipped missile capable of hitting the United States and has recently threatened to land missiles near the U.S. Pacific territory of Guam.


Sorry, but what lust for war and domination?


Makes a good Boogyman story for the fearful, doesn't it?

A nuclear attack with just one device would destroy the New World Order and Globalism. They would never recover and they know it. Globalism would die.

I hate like hell to say it, but one nuclear blast may save the world from Globalism...

posted on Sep, 1 2017 @ 09:37 AM
link
In trying to see an acceptable outcome from all this , all one can envision is a smoking hole of a peninsula , and fallout drifting over Japan . Only idiots would want that result, but its about the only option ?
Its not like Saddam had a 2 million man army , nothing like: so going there with Americans, again , is really not a good idea . The NoKos fought so hard last time they had to leave it alone eventually . That was an acceptable outcome then , not poking the wasps anymore

You can't stop nuclear proliferation by using nuclear weapons, only diplomacy can work . Trump said he'd talk to anyone , so you should go there and see them Trumpster , break the mould . Give them some ground and make amends .

Quite simply what gives anyone the right to tell anybody what to do, this is a value we westerners all believe and live by.
History is well documented that no matter where a particular group of mankind is from invasion of others has always been a common denominator in order to fullfill selfish greed/desires to expand their so called empires, most if not all corners of the earth are neck deep guilty of this, a fact that clearly cannot be denied. However in these so called modern and civil times it should be live and let live but still expansion for greed/domination goes on albeit more intelligently and sly.
When will mankind learn, nth korea is simply saying we've had enough!!, enough of western input, enough of western sanctions and enough of being dictated to.
Like any individual/group who has suffered great loss the old eye for an eye demon rares its ugly head, the deprived never forget their deprivers and the scorned rarely forgive, in all honesty how can they?.
As always monkey see, Monkey do.
Without a doubt 99.9% of mankind is guilty, rotten to the core guilty of forcing their will on others in one way or another and this world has gotten lost in the endless turmoil that it creates as a result.
Who's at fault, who's the innocent, who bloody nows anymore, chinese whispers blah,blah,blah.
Doesn't matter who presses what first, we as a species deserve annihilation for every disrespectful/despicable act committed in history against ourselves in the name of what when you boil it down is always simply greed.
I doubt anyone is free of that burden bar the afore mentione point 1%.
WHOEVER THEY ARE.
Everyone in the world who is armed needs to disarm immediately , this includes all weaponry, as long as humanity seeks more proficient ways to kill we are doomed.
So who cares who starts what or who presses what first no one will win.
How hard can it be, A WORLDWIDE PLEBISCITE TO VOTE ON FORGIVENESS FOR PAST ATROCITIES AND FOR TOTAL DISARMAMENT.
The outcome may surprise.
Then as nike say " JUST DO IT ".
This world makes me sick as do most of the comments im forced to read.
Now whos going to take my advise and act, as i surely don't have the power.
THAT IS THE REAL QUESTION.

originally posted by: GeneralMayhem
The NoKos fought so hard last time they had to leave it alone eventually .

A good Scottish friend of mine fought in that war. He said he rarely fought any Koreans, the enemy was mostly Chinese. Loads of them. Reckoned when they appeared it was like an army of ants, just so many of them all at once.

Who was involved? Over six million soldiers, sailors and airmen fought on both sides in the Korean War... More than three million of these were communists from North Korea, China and Russia. Opposing them were almost three million from South Korea and from 21 United Nations (UN) countries including Australia.

The 300,000-man Chinese offensive caught the U.N. forces off guard, largely because of U.S. Gen. Douglas MacArthur's belief that China would not openly enter the war, and vastly expanded the conflict. The Korean War began when communist North Korean forces invaded democratic South Korea on June 25,

Sorry to dissapoint you, i would explain further but clearly narrow mindedness is your number 1 trait.
Hope sincerely you can overcome that champ.

originally posted by: Timely
a reply to: ADSE255

Negotiations in tbe past have amounted to extorting money from the US ... 25 years worth.

That's mostly untrue though. Trump was telling another porky with that one.

originally posted by: ADSE255
a reply to: Timely

I don't think the guy is losing it, he never had it to begin with. The fact that he's attempting to go up against a super power is proof. Insane is an understatement. Don't get me wrong, I think most of the world leaders are insane but, they're so much better at hiding it thats all.

Real superpowers have a huge range of options to demonstrate their displeasure; sending more troops to army bases, sending an aircraft carrier (and supporting ships) in the direction of a trouble spot. North Korea can really only test a nuclear warhead underground in the mountains - the USA just needs to run simulations on supercomputers, plus they have vast areas of land where missile tests can be carried out.

North Korea could simply test their missiles by sending them out to sea, but they choose to fire them in the direction of other countries.


originally posted by: ADSE255
a reply to: Timely

I don't think the guy is losing it, he never had it to begin with. The fact that he's attempting to go up against a super power is proof. Insane is an understatement. Don't get me wrong, I think most of the world leaders are insane but, they're so much better at hiding it thats all.

Real superpowers have a huge range of options to demonstrate their displeasure; sending more troops to army bases, sending an aircraft carrier (and supporting ships) in the direction of a trouble spot. North Korea can really only test a nuclear warhead underground in the mountains - the USA just needs to run simulations on supercomputers, plus they have vast areas of land where missile tests can be carried out.

North Korea could simply test their missiles by sending them out to sea, but they choose to fire them in the direction of other countries.

Yep that's what you would think would be the common sense thing for them to do, they're toying with everyone like some dude on crack who thinks he is so much greater than he really is, more powerful but only in his mind. From what I see, this little dictator is no better than those that created ISIS or alcheida and those that funded them in the west. This dictator Kim Jong Un wants in on the action.

He sees the other power players and well... It's like watching a cock fight right now. Insane rulers don't care about the statistics of how many innocent will die all theyre focused on is what they want.

It's a cock fight. They're all insane. They don't care who likes what they're doing and who doesn't because ... INSANITY. No amount of words will sway KJU because HE DOESNT CARE.

posted on Sep, 1 2017 @ 01:45 PM
link
If this was only between the US and NK the war would have already begun and with US as the victor. It's not though China and Russia have been posturing to change the petrol currency for awhile now. Hence why gas prices have plummeted the last couple years and Rockefeller's have been dumping oil stocks as of late. They're using NK as a escape goat so they can continue posturing on the sideline till the time is right.
edit on 1-9-2017 by Skeeball because: (no reason given)

He's probably going on what little information the public is given.....

The public isn't given much, just enough not to question too much. Hopefully we'll find out more details as the weeks progress.

It's a game play between Nation's. I don't know that we'll really ever know what's going on between them all. Would love to hear what they say about it in private though.