Looks like genius strategist Pelosi got another one wrong by not speaking out against Antifa soon enough. It took a lowly Mayor, of the most liberal kind from Berkeley, to say they had enough with violent Left group Antifa.

Although wanting to classify them as a "gang" is a good start, they are politically motivated which is not a "gang", they are domestic terrorists.

Bloods, Crips, MS13 and so on, can still gather and walk around and cause drama.

I guess good on this mayor, but it wont change anything.


The same Mayor who supported BAMN? Maybe he is getting nervous, but when I saw his LEO's abandon ship on Sunday, I think he is just doing the typical political CYA.

Let's see what he does in the future to see if he is telling the truth or not.

Well it is Berkeley, home of politically incorrectness.. so they deserve some credit for atleast taking a step in the right direction.

originally posted by: IAMTAT
Is the KKK a gang too?

Imagine the terror they instill with their organized finger snapping...

I hear the cartels are always happy to engage in a little healthy competition.

Too late. Their Frankenstein now is running wild. Should of done that a long time ago.

No, give them a one way ticket to North Korea and have them tear down the statues of Granddaddy and Daddy Kim.
edit on 8/29/2017 by starwarsisreal because: (no reason given)

Be leery of how giddy and gleeful you are about this. The political pendulum always swings back eventually. It may be 4 years, it may be 20, it may be 50. But eventually the chances are really high that what you support, groups you belong to or even websites you frequent, will be enough cause to label you a gang member or terrorist or a supporter thereof. Advocating for labeling extreme ideologies eventually backfires on everyone who proposes it. Let people exercise their rights to out their stupidity publicly and if individuals initiate violence, go after the individuals who commit those acts, hide them and support them afterward or give the marching orders.

This is as dumb as the concept of a "hate" crime. Any violent assault, murder etc... stems from some sort of hatred and doesn't need an additional label to add prison time to it. Crimes are crimes. Arrest, try and sentence people accordingly. Utilizing sweeping brush strokes against any group is senseless and creates even further contrasting divides in a country that is already critically partisan benefits nobody except the for profit judicial system and you support feeding it relentlessly it would seem. Especially when geared towards a loosely affiliated group like AntiFa with no centralized leadership. At the end of the day, you're the one who has to pick your battles. I just think you're picking a little too gleefully without a proper appreciation for trhge cyclical natrure of history.

originally posted by: IAMTAT
Is the KKK a gang too?

Are they an organized group of criminals? Is their activities criminal or just clown like motions. Has Antifa been involved with criminal activities such as restricting other's 1st amendment rights, violence, rioting etc?

originally posted by: Shamrock6
a reply to: DBCowboy

Imagine the terror they instill with their organized finger snapping...

Come on these guys look so scary... 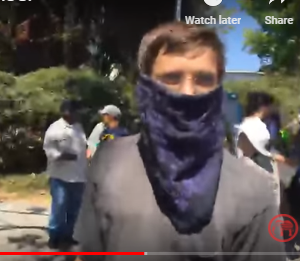 Yes the kkk has been involved in lots of crime. Also want to destabilize and restrict the 1st amendment rights of others. kkk crimes
edit on 29-8-2017 by luthier because: (no reason given)

You think? there are so many interacial/Transgender Gangs


You think? there are so many interacial/Transgender Gangs


Transgendered?
I doubt it.

Maybe not so much MS-13 though.