Hurricane Harvey: The potential to change US history? 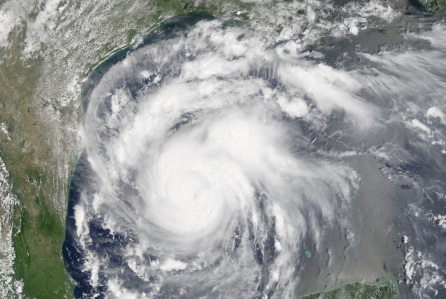 Hurricane Harvey is expected to reach landfall shortly as a Category 4 storm. Forecasters are predicting rainfall potential in some areas of as much as 50 inches. Storm surge expectations may exceed 13 feet. More than two-thirds of people in the storm's path have chosen to ride the storm out...and perhaps worst of all, the storm may stay relatively stationary for as much as a week.

Needless to say, this storm is quite the monster.

While I hope the most dire predictions don't come true, it really doesn't look good.

For years, scientists have warned about the potential devastating impact to the US of just such a storm in Texas.

In 2013, the Texas Tribune published the following article:

Researchers: Texas Not Ready for Next Hurricane

Five years after Hurricane Ike slammed into the Texas Gulf Coast, researchers suggest the region may actually be more vulnerable to future storms than it was before, as its population and industry continue to grow without new safeguards.

...more than half a million gallons of oil spilled into the Gulf of Mexico as a result of Ike.

The city is low-lying and most of the soil is clay...

Large-scale developments—such as apartment and office complexes, shopping malls and roads—have added vast stretches of pavement to the Houston area. These expanses of concrete and asphalt inhibit drainage and worsen flooding, as, when heavy downpours hit, the rain flows into other neighborhoods rather than into the soil.

3. Flood protections have had trouble keeping pace with development

While flood protections have been strengthened in the region in recent years, local officials have been perpetually trying to catch up in newly developed areas where the effects of higher water levels are less known. Lax building regulations in the area also have allowed subdivisions to be built where flooding was inevitable, experts have said.

New buildings erected in Houston are required to be built at 12 inches above 100-year-flooding levels—meaning there is a 1% chance of that the area will be inundated within a single year. Harris County, Texas—in which Houston is located—requires new buildings to be built at 18 inches above 100-year flood levels. But recent flooding in some parts of Harris County, reached 250-year- and 500-year-flooding levels, and Mr. Brody notes that almost half of insured flood claims are outside the flood plain boundaries.

The region is also weighed down by its outdated drainage systems. Its network of channels was built beginning in the early 20th Century to sustain only a 10-year flood, a milder—but more likely—event. Local officials have worked to widen existing drainage channels, but retrofitting them to a 25-year-flooding level is costly.

In the fall of last year, this article asked:

Houston is a sitting duck for the next big hurricane. Why isn’t Texas ready?

If a storm hits the region in the right spot, “it’s going to kill America’s economy,” said Pete Olson, a Republican Congress member from Sugar Land, a Houston suburb

Such a storm would devastate the Houston Ship Channel, shuttering one of the world’s busiest shipping lanes. Flanked by 10 major refineries — including the nation’s largest — and dozens of chemical manufacturing plants, the Ship Channel is a crucial transportation route for crude oil and other key products, such as plastics and pesticides. A shutdown could lead to a spike in gasoline prices and many consumer goods — everything from car tires to cellphone parts to prescription pills.

“It would affect supply chains across the U.S., it would probably affect factories and plants in every major metropolitan area in the U.S.,” said Patrick Jankowski, vice president for research at the Greater Houston Partnership, Houston’s chamber of commerce.

Houston’s perfect storm would virtually wipe out the Clear Lake area, home to some of the fastest-growing communities in the United States and to the Johnson Space Center, the headquarters for NASA’s human spaceflight operation. Hundreds of thousands of homes and businesses there would be severely flooded.

A similar article written in October of last year, said:

Houston is the second busiest port in the United States in terms of pure tonnage and one of the most important shipping points in the country for natural gas liquids.

Texas General Land Office (GLO) Commissioner George P. Bush sent President Trump the request in a letter, which was cosigned by more than 60 state and local leaders in Texas this week, asking for "$15 billion in federal funds to protect this vital area."

The Houston and Galveston bay areas are critically important to our national infrastructure, with 428 million tons of cargo flowing through the region annually. In fact, the Port of Houston and the Port of Beaumont are the 2nd and 4th busiest ports in the United States.

But of course, that ask seems a little late in tonight's context.

The more I look at this, the worse this looks like it will be.

In Galveston County, nearly 70 percent of businesses and 75 percent of jobs are in hurricane flood zones, according to a Reuters analysis of data compiled by the U.S. Bureau of Labor Statistics.

"Ike was the third most destructive storm in U.S. history after Katrina and Sandy."

It seems this storm may rival all three.

Hang on to your seats, because I have the very bad feeling this storm will bring severe economic, environmental, political and social consequences.

Let's all hope for the best, even while I fear the worst.

For those of you in the path of the storm. Stay safe and be smart. My thoughts are with you.
edit on 25-8-2017 by loam because: (no reason given)

And humans are gonna human.


I got a new pommel-horse type seat for the Ranger™ so if Flori-Duh gets the side spray, it might turn of the Frog bite for the Basses, Mr. & Mrs. Plus We could use the water after the TURD Politician upset the water table in a cash grabbing scheme 8 years ago. Right off the Withlacoochee River that flows uphill to begin with...

Excellent commentary. Thank you for the deeper insight. This truly is a disaster incoming. Our modern conveniences are fueling its worst potential

Unfortunately had that request been granted it would have done nothing to help this situation. Perhaps he will reconsider, but then we have the congress so, who knows.

posted on Aug, 25 2017 @ 08:47 PM
link
Gonn'a be lots of toxic chemical movement. Erosion, and stuff just plain washed away into oblivion. They will be digging up debris for decades. Should'a got out while there was still a chance. Now all we can do is pray for them.

Keepin my fingers crossed that things turn out mildly.

Stay safe out there Texas.

posted on Aug, 25 2017 @ 08:56 PM
link
It's foolhardy to concentrate so much of our infrastructure and industry in the path of periodic hurricanes, but in any one place like we have Houston. Strategic thinking was not on the minds of the people who allowed this concentration to happen.

posted on Aug, 25 2017 @ 08:58 PM
link
Yes, thank you for the info and insight. Secondary to the risk of people(pets) and their homes being harmed, I dread the potential environmental devastation too. Growing up, I visited Galveston for beach fun and fishing trips for 20 plus years and over that time span watched the fishing decline and beach degrade into muck and sand covered oil. The fishing declined for a number of reasons, red tide, pollution and oil. There have been numerous oil spills over the decades in and around the ports. It is what it is I suppose, but this storm could really flush multiple contaminants into the coast area,including ports,bays and beaches. How many docked barges with tanks full of oil or chemicals could be damaged? How many oil fields and pump stations could be damaged? How about refineries and natural gas?

Man, I hope things don't get too crazy. Prayers and blessings for all that live down there, and have a plan and fresh water stock at the very least.
edit on 5pmf31154931 by waftist because: (no reason given)

posted on Aug, 25 2017 @ 09:01 PM
link
Scary stuff Loam. Praying for Texas tonight. But just to dog-pile some doom on top of this potential apocalypse. Three words: Galveston National Laboratory.
edit on 8/25/2017 by kosmicjack because: (no reason given)

Seriously...how the heck do these massive corporations "get out"
Logistically impossible and dependent on water

Indeed, the models I just saw have it essentially barely going inland, sitting, coming back down to the coast, regaining strength, and one model had it heading straight for Houston.

Gas prices are already going up. Expect that to continue. We'll be lucky [economically speaking] if all that happens is gas prices go up for a bit!

Houston... we have a hurricane! (Harvey)

posted on Aug, 25 2017 @ 09:46 PM
link
This is not the first time Texas has been hit by a big Hurricane. Actually, Texas gets hit by a good sized one probably every 10 years. I rode out the one that busted up Houston really bad in a single wide trailer further inland where it had dropped to a Cat 1. The big risks are falling trees and flood zones / paths.

And also the refinery infrastructure, which has been mentioned. It could cause gasoline supply shortages / price spikes.

originally posted by: skunkape23
I've got a boat and a fishing pole.
No stress here.
Nature is going to Nature.

Nevermind.
Good for you.

originally posted by: six67seven
We all know what Houston is known for right.....?

Indeed, the models I just saw have it essentially barely going inland, sitting, coming back down to the coast, regaining strength, and one model had it heading straight for Houston.

Gas prices are already going up. Expect that to continue. We'll be lucky [economically speaking] if all that happens is gas prices go up for a bit!

Houston... we have a hurricane! (Harvey)

Gonna go fill up jeep and cans tomorrow...didn't even think of this til I saw this thread...

"Ike was the third most destructive storm in U.S. history after Katrina and Sandy."

And yet nobody ever remembers Ike because it happened just after Katrina.

I was deployed during Ike, bust lost all my possessions in that storm because my family (where my stuff was stored) didn't bother to protect anything since they had just gone through the process futilely for Katrina. Basically the same as a lot of others. People packed up as much as possible for Katrina and boarded up and put things up high etc..., and evacuates. Then Katrina hits in New Orleans. So when Ike comes, they don't bother with all the hassle but just evacuate bringing only what they needed. So people lost a whole lot more then they normally would have due primarily to the closeness of Ike to Katrina. Not to mention the idiots who just straight up 'weathered' the storm.

Good luck to all those on the TX gulf coast.

I'd be grateful to maintain power at the hotel and complete the job on time without having to kayak to the site.

Things are calm here now but it comes in bands.