posted on Aug, 25 2017 @ 11:13 AM
link
I'm not sure what to think about this one.
The people are already suffering so I doubt it will hurt them, but the government will take a hit for sure.


"The U.S. imposed its first economic penalties against Venezuela on Friday, hitting the South American country’s financial sector in an attempt to starve President Nicolás Maduro’s government of cash."


"Barring Venezuelan debt purchases could cripple Caracas’ ability to raise money to pay off interest on its growing national debt, as the oil-producing country has been doing in the middle of an unprecedented economic collapse."

Will this cause a revolution in Valenzuela?
It certainly keeps wall street from financing maduro.
edit on 25-8-2017 by Bluntone22 because: Eta
edit on Fri Aug 25 2017 by DontTreadOnMe because: MANDATORY EX TAGS added IMPORTANT: Using Content From Other Websites on ATS


The country is already broke and a wreck?


How are sanctions going to work?

I think the idea is to keep them from paying off their debt. But in not sure myself.

Guess we wait and see.

With the way things are going we will soon see war in Venezuela and North Korea.

I wonder how long will it take before people snap and say enough is enough.

The comic book the DMZ shows that because of the US spending more on foreign wars while neglecting its citizens back home, Mid Western militias started launching a rebellion against the government and begin a 2nd American civil war.

I dont see a war in Valenzuela, maybe more like what happened in Panama.

Korea is a different monster. The problem was ignored since clinton and is likely to bite us in the butt.

A coup is more appropriate than a cival war here.

posted on Aug, 25 2017 @ 11:45 AM
link
Venezuela is socialist. Obama had wanted a good relation with Venezuela. Trump is against socialism. This move by Trump against Venezuela was expected.

It will infuriate the citizens more though. Let's face it, US citizens are very wary of foreign interventions and a US invasion of Venezuela will further make the people don't trust the government.

Did someone mention oil in Venezuela? Sound's like they need some FREEDOM!!!! 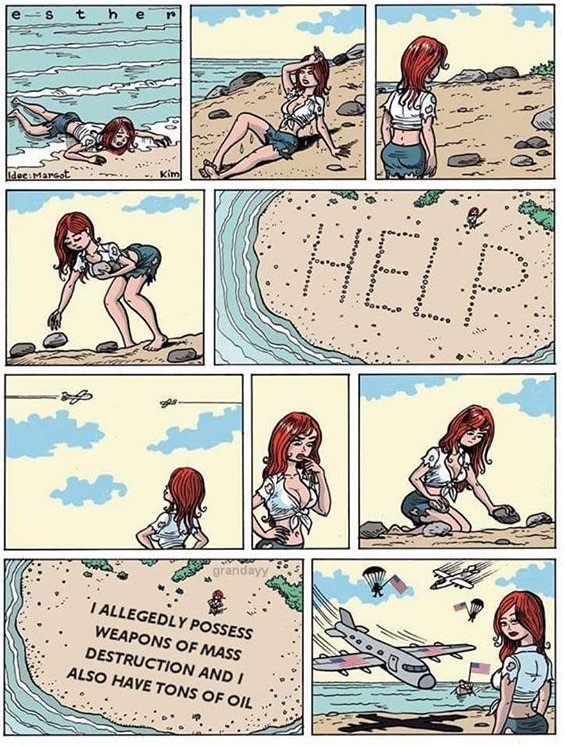 The sanctions only affect the US. It prevents Maduro / its oil company from selling Venezuelan debt on US markets.

Business is picking up thanks to trump.

Apparently I missed the last 8 years of peace.

Didn't we already buy their oil?

Why pay for the milk if you can just freedom the cow?

We pay for Iraq's oil.
The Chinese buy more than half of Iraq's production.

This is bad, in my opinion. People are already starving and going without energy or clean water. This will hurt real people, not just the government. I wish Trump would fix what's wrong at home and stop messing with others.

Let's be honest here.
Trump is trying to fix his home.
Repealing the aca.
Cracking down on illegal immigration.
He has been stoped at every turn.

Neither side can agree what our problems are yet along fix them.

Venezuelans are suffering. No lie.
Not sure this will be better or worse for them.