posted on Aug, 25 2017 @ 10:09 AM
link
Here is an opinion piece from the Washington Examiner:
How do you say 'whoops' in Russian? Podesta Group retroactively files more DOJ disclosures for pro-Putin work

I am posting the entire article as it isn't very long.

At the bottom is a link to Tony Podesta's filing.

The Podesta Group belatedly filed several new disclosures with the Justice Department on Aug. 17 related to work the firm completed between 2012 and 2014 on behalf of a pro-Russia Ukrainian think tank.

Back in April, the powerful Washington lobbying firm run by Clinton ally Tony Podesta filed a document admitting its work for the pro-Russia European Centre for a Modern Ukraine may have principally benefited a foreign government. New disclosures revealed dozens of previously unreported interactions the firm made with influential government offices, including Hillary Clinton's State Department and the office of former Vice President Joe Biden, while lobbying on behalf of the center. Embattled ex-Trump campaign manager Paul Manafort failed to disclose his extensive lobbying efforts on behalf of the center at the time as well.


Here is a link to one ofthe filings.
Amendment to registration statement
Tony Podesta's form

As the Russian collusion investigation continues, could this be a preemptive action by the Podesta group to get ahead of future inquiry?

edit on Fri Aug 25 2017 by DontTreadOnMe because: posting entire article is not allosed....trimmed anad IMPORTANT: Using Content From Other Websites on ATS

Does that relate to Podesta's previous demand to get immunity ? 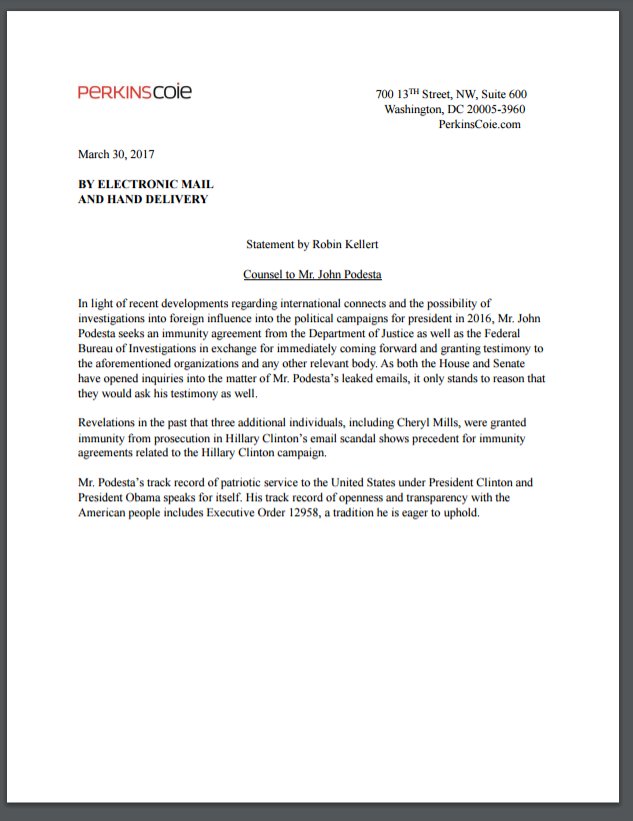 Wow, I seriously hate that guy.

Pretty much but don't let that take away from anything.....


Russia Russia Russia.....There I said it three times like Beetlejuice....It's bound to show up now....

Pretty much but don't let that take away from anything.....


Russia Russia Russia.....There I said it three times like Beetlejuice....It's bound to show up now....

As the Russian collusion investigation continues, could this be a preemptive action by the Podesta group to get ahead of future inquiry?


No. Russia gate has intentionally been obscured by statues, hate, and skin color. Eventually a lower court will decide theres no validity and discontinue the 'investigatin'. By then everyone will have forgotten anyway and moved on, distracted by the media spotlight.

posted on Aug, 25 2017 @ 10:51 AM
link
Well HRC was supposed to take care of all the shady deals and that they never saw the light of day. Now they scramble to salvage the situation as best they can. I guess the fear of being charged with treason is a pretty good motivator to play ball. Though i hope all the #ing traitors have to finally face the music instead of a pardon or plea deal. Hang them all out to dry and let the public decide their fate. They deserve to know the truth no matter the consequences.

At the time of the firm's retroactive filing in April, Politico reported CEO Kimberly Fritts "said in a statement that the firm relied on assurances from the think tank, the European Centre for Modern Ukraine, that it was not controlled or financed by a foreign government or political party.

That is important context there. It appears the firm may have been told that the think tank they were doing work for was a private entity that was not funded by foreign monies, and they in fact were.

originally posted by: butcherguy
a reply to: theultimatebelgianjoke
His lawyers refer to him as 'patriotic'.


Between this and Team Clintons uranium one.

I call them Russian shills.

Sorta. I mean, multiplied by ten. It's the DNC way! Complain about what someone else is doing when it doesn't suit you, while simultaneously doing exponentially worse. Trump U? Bad! Taking 10s of millions from for-profit universities (other Trump U's)? Not bad! Well, unless they get caught, then it's whoever's fault that caught them. It's probably like having kids.

Wonder if the think tank simply lied to them.


Maybe.
Or could it be plausible deniability?

No, it's totally different. Podesta is a Democrat and against Trump.
edit on 25/8/2017 by UKTruth because: (no reason given)

Podesta Group has been subpoenaed by Mueller.

Looks like these retroactive disclose filings have something to do with Mercury LLC, Manafort and Russia forum some shenanigans in 2013-2014.

Two of the firms, Podesta Group and Mercury LLC, worked in Washington with Manafort partner Rick Gates, according to lobbying disclosure records. Three other firms worked in Europe, the executive said. NBC News could not confirm the identity of those three.

At the time, Ukraine was run by a pro-Russian political party that had paid Manafort $17 million for consulting in 2013 and 2014, according to Manafort's latest foreign lobbying disclosure filing, which he filed belatedly under Justice Department pressure.

I've been saying for a long time that Podesta -- or more specifically the Podesta brothers -- are the ones to watch. I read that the Podestas made far more off the Russian uranium dealings than Hillary and the Clinton Foundation, but all the focus has been on Hillary. And even this article refers to "Hillary's State Dept" even though Hillary left the State Dept in January of 2013, and these filings are pertaining to 2013 and 2014 -- after Hillary had resigned.... But Podesta was still an advisor to Obama. Hmmmmmm.....

When the whole ugly truth comes out, the Podestas will be in the thick of it all.