The Blue Whale Challenge; or, Don't Save This Whale!

Almost immediately after [Ankan] Dey’s suicide, it began to be reported as the first death in West Bengal linked to the global Blue Whale phenomenon.

The Blue Whale challenge is said to be an online game in which a designated curator assigns players various tasks over a 50-day period, culminating in the player committing suicide. It is believed to have originated in Russia and spread to other countries. In the past several months, several suicides across India have been linked with the challenge in some form or the other, prompting demands that the game be banned. The central government has even ordered Facebook and Google to take down all material connected to the challenge.

The article refutes that Dey was actually playing the challenge.

Wait?!! Wtf is the "blue whale challenge"?? As stated, there are 49 daily tasks that each "player" has to complete. After completing the 49th task, they have one last task: commit suicide.

It seems to be played in India (so far) which is what the parent's fear in the quartz article points out--more kids are "playing" this "game". The "game" started in Russia where a guy bragged he was getting teenagers to kill themselves for which he was sent to jail for 3 years (inciting people to kill themselves). The Quartz article says "80 out 150 suicides" of young people over a year period in Russia were linked to the BW Challenge.

Is this the "new normal"?? Over at my Universe 25 thread (link in sig line), the "behavioral sink" is when a social norm is redirected to antisocial activity like violence. I argue that part of the "social imprinting" that happens at a certain age that is around the same time as awakening human sexuality (using Tim Leary's 8 Circuit Model: Wikipedia), is where young people are vulnerable. I point out the suicide pact and general rise of suicide in First Nation Canadians is an example of this "behavior sink" where social norms no longer function. The result is a social imprinting on death. A restating of that idea is, "In order to feel like I belong, I have to commit suicide."

That is my take: A real example of a behavioral sink using the internet as a medium. Is this "fear mongering" like "heavy metal music kills" was back in the 80s? Parents looking to blame something, Blue Whale Challenge, because they are out of touch with the modern era? Kids being kids? Something I'm totally missing the point on?

Personally, I never heard of this (I will not call it a "game" because it is too dumb of an idea to begin with--get it kids? Don't bother with this!), stupidity until I read the article.

This is one whale that does not deserve being saved!


I have heard of this and didn't believe it when I did. I thought it was one of those creepy pastas or internet memes.

It's truly sickening and one more reason I weep for humanity's shortcomings. 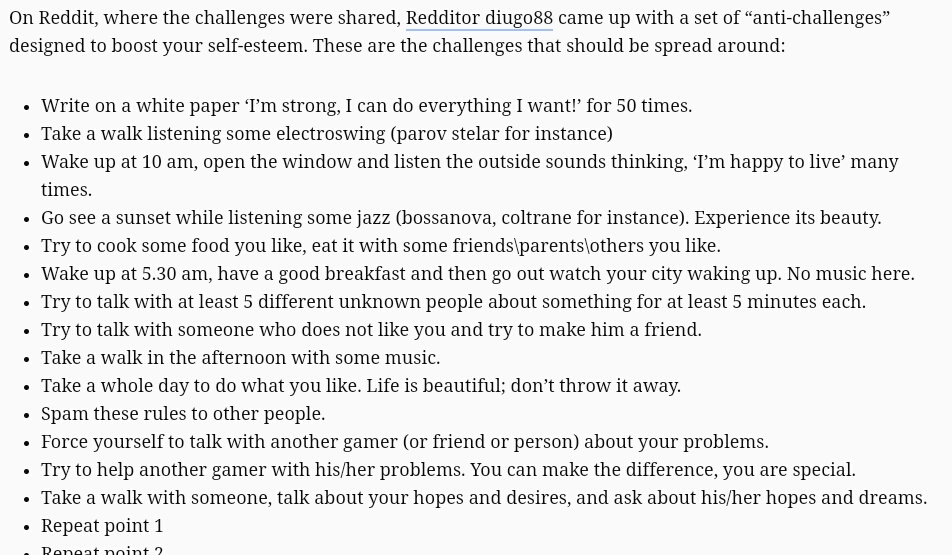 made me facepalm so hard. A pathetic sad example of why younglings are convinced grown ups don't get them. The challenge obviously speaks to borderline and/or depressed hormone zombies looking for a way to prove their strength and lack of fear. The goal has to be to become a whale, a member of secret, special, selected fews not playing the dumb game of social adjustment.
Comments like the above will do nothing but convince two or three more "on the edge" to jump.

posted on Aug, 24 2017 @ 02:19 PM
link
Sorry but killing yourself because of a computer game is Darwin award material.

The thing is we are obviously not talking about happy healthy children because they would never play the game if life/society had provided them with any sort of feeling at home or belonging.
Kids drawn to this kind of "game" can't use these tips, their emotional start point is already somewhat estranged from beauty, happiness and self confidence. That's why they seek darker types of recognition.

Well, it is dumb either way. The Russian claim was investigated and seems legit. The fear among the Indian parents is real. The India news keeps pushing this. It could be a "fake news" and "thin man" type internet meme but there is a body count.

Is that the "pink whale" challenge? "Coltrane and a sunset" sounds good to me!

Depression never really occurred to me. I'm just looking at this as, "Are you kidding me?!!" Which is why I asked if I am missing the point.

I need to type faster!

I see your point Peeple. There is a immaturity in the players so equating them to "normal" does not work as a starting point. Add depression on top of that and I see where you are coming from.
edit on 24-8-2017 by TEOTWAWKIAIFF because: tag on reply

It's a modern version of satanistic rituals. In the digital, atheistic age.

Words make fools of us all sometimes.

With a happy, warm fuzzy, name!

eta: I am not trying to legitimize this at all just coming at a problem with the tools I have and know.

I really need to type faster!!

The Russian investigation was done by Snopes... so I understand your creepypasta feeling.

Now kids... behave! Peeps, stop being so literal! NB, as always, thanks for the patience! I know this is a difficult subject to talk about because it is a serious topic. Please try and be civil or I will bring out the trump card (hehehe!)

This is a chat about something that might be overblown to begin with. Or it could be a cover up to keep borderline kids from finding out about BWC. I was wondering which it might be and asked a question.

I do not always have the answers.

source
And what I'd never have guessed is New Zealand has the highest rate of the developed world.

Although it sounds like this isn't quite the same, it sounds similar. I wonder if it's life imitating art or the other way around...?

That is a scary statistic. I did not know the numbers were that high.

Notice how each Maori, Pacific Islander, First Nation peoples are all a segregated population. I would wager that Alaskan Natives and American Indians are also higher than general population. I know I keep going on about U25 but that is Calhoun's "first death" or death of soul. That just breaks my heart.

I don't know what to do.

Reminds me of The Ring in a way. You are dared to do something innocuous ending in horror.

Movies and music are part of the 50 tasks. So that is a good question, "life imitates art, imitates life" (the second time I have typed that same sentence today! )
edit on 24-8-2017 by TEOTWAWKIAIFF because: missed a question mark because it was a question

originally posted by: khnum
Sorry but killing yourself because of a computer game is Darwin award material.


I thought Indians were drinking pesticide because Monsanto ruined their crops?

Quora.com - Have you played the Blue Whale challenge?

The immediate answer is: No and neither should you.

There is a detailed description on how it works in the second post. Very insidious. Even includes naked selfies (they blackmail the players with them to keep on going). A really twisted, sick control over a borderline person.

I am sorry I brought this up!


I wonder if they have correlated the kids in India playing 'BWC' with which castes players belong to?

posted on Aug, 25 2017 @ 09:30 AM
link
this happens when the dumb reproduce more than the intellectual.
be prepared to see way more of this in the future.