posted on Aug, 16 2017 @ 02:27 PM
link
I made a search and couldn't find anything about it, so if someone here can confirm, or point me in the right direction to research more, would be much appreciated.
He was apparently a Russian cosmonaut and fascinated with Pegasus. As the highly decorated pilot was on his mission in 1988 he decided not to return to Earth, but instead steered towards the constellation of those four fixed stars.

Is it just a legend? Did he even exist? Or was it covered up due to publicity? I find the story fascinating, I just don't know if it ever happened. The entire internet seems to have nothing about him. Is there some kind of list with all people who ever went to space?


Lost Cosmonauts is a Conspiracy Topic but I have not come across Grigorij Berdjajew? Grigori Yefimovich Rasputin, but that is whole other conspiracy...

posted on Aug, 16 2017 @ 02:43 PM
link
Ah now there was a Grigori Nelyubov Cosmonaut selected on my B-day with Yuri Gagarin who was dismissed for drinking and disorderly conduct from the Space program later committed suicide and this was kept a secret. This was the start of coverups leading to the topic of LOST COSMONAUTS...It wasn't released until the 1980's so the coincidence is probably who you are looking for, although Grigori is a fairly common Russian name that get this means...Watcher Angel
edit on pmbAmerica/ChicagovAmerica/ChicagoWed, 16 Aug 2017 14:46:28 -0500pm2America/Chicago by abeverage because: for topical reasons

It's maybe a myth. James Oberg has a nice 1975 article about lost cosmonauts on his site. Fascinating topic.

posted on Aug, 16 2017 @ 02:59 PM
link
Jim is a member on ATS as JimOberg perhaps asking him. However I think I have the right cosmonaut that sparked that mystery and theory...

originally posted by: Peeple
a reply to: abeverage

It's maybe a myth. James Oberg has a nice 1975 article about lost cosmonauts on his site. Fascinating topic.

Not just means Watcher...it is the name of one of THE WATCHERS or Angels!

In the Book of Enoch, the Watchers (Aramaic עִירִין, iyrin) are angels dispatched to Earth to watch over the humans. They soon begin to lust for human women and, at the prodding of their leader Samyaza, defect en masse to illicitly instruct humanity and procreate among them.

The name itself seems also fabricated Grigorij means watcher and Berdjajev was orthodox philosopher who criticised "collectivized, mechanised societies"
Huh thanks to you both it totally makes sense.
...wasn't what I was hoping for but a cool legend, he flew towards Pegasus with that name...pretty.

originally posted by: Peeple
a reply to: humanoidlord & a reply to: abeverage

The name itself seems also fabricated Grigorij means watcher and Berdjajev was orthodox philosopher who criticised "collectivized, mechanised societies"
Huh thanks to you both it totally makes sense.
...wasn't what I was hoping for but a cool legend, he flew towards Pegasus with that name...pretty.

I am not sure where you heard the story, but it really isn't possibly especially back when the Russians were starting their space program.

Here is something to think about in conjunction to that story or others like it.

Leaving Earth orbit is incredibly difficult and will use a lot of fuel. During the mission to the Moon most of the Saturn 5 rocket fuel was used to get out of low earth orbit. So an astronaut put in low Earth orbit will not have enough fuel to decide to fly toward the constellation Pegasus...they could rotate the capsule toward it for sure, but they couldn't just blast off in the that direction and then become lost in space.

If they did blast off using any fuel the only thing that that would happen is a higher orbit as they wouldn't have enough fuel to escape Earth. They would run out of fuel and not be able to return, but would still only be caught in a perpetual Earth orbit not really lost in space, but certainly lost to return home...
edit on pmbAmerica/ChicagovAmerica/ChicagoWed, 16 Aug 2017 15:24:23 -0500pm3America/Chicago by abeverage because: corrections

They procreate with female humans giving us the Nephilim.

There is two thoughts on who/what the Nephilim are. One is the offspring of Seth the other is just the term, "angels".

Forgot that the horse sprung from Medusa's neck after she was beheaded.

The name Pegasus is derived from the Greek pegai which means “springs” or “waters,”

The Watchers, Greek legend, Christian and Muslim... and I had never heard of the cosmonaut heading off to the stars tale either!

What an interesting subject!

eta: if you drink from the stream Pegasus created you receive the gift of poetry.
edit on 16-8-2017 by TEOTWAWKIAIFF because: a true romantic notion, heading off to a distant galaxy

Someone's juices were indeed flowing as they told me that. Thanks for adding the Pegasus bit.

posted on Aug, 17 2017 @ 10:21 AM
link
Funny how Google doesn't give any results for "Grigory Berdyaev" (which is how the name should be transcribed in English). Even Googling the Russian name itself (Григорий Бердяев) doesn't bring up anyone famous or notable.

My verdict - a totally made up name for a made up cosmonaut.

posted on Aug, 17 2017 @ 10:27 AM
link
Why can't we just load up one space shuttle with as much food and water as it can carry, point it towards mars, and just see what happens. I'm sure there's no shortage of qualified people who would jump at the opportunity.

originally posted by: jjkenobi
Why can't we just load up one space shuttle with as much food and water as it can carry, point it towards mars, and just see what happens. I'm sure there's no shortage of qualified people who would jump at the opportunity.

Yeah, I'd be one of them (except I'm not qualified).

Here's the thing: Current spacecraft are cramped, and even if we get the travel time down to a few weeks, the travelers will need elbow room. Now add some more room for the consumables - food, water, air, medicines, spare parts, etc.).

Picture in your mind something like the International Space Station. It keeps several people alive for months, but currently needs regular supply flights from Earth. Imagine loading it with enough provisions to keep it going for 2-3 years on its own. We also need to add a radiation-shielded shelter for the crew to take refuge in if there's a solar storm. Now let's add an engine to send it on its way.

Here's where we get to the meat of the problem: Fuel. Currently the ISS masses ~420 tons. With our additions, let's say it'd mass around 500 tons. With current rocket technology, it would take more than 1,000 tons of fuel to boost it enough to get to another planet. Advanced propulsion technologies can increase the exhaust velocity and thus reduce the total amount of fuel needed, but it'll still be several hundred tons at least.

It took dozens of Shuttles flights to haul up the stuff to make the station; and we don't have the Shuttle any more.

originally posted by: jjkenobi
Why can't we just load up one space shuttle with as much food and water as it can carry, point it towards mars, and just see what happens.

Because the Space Shuttle was only designed to get to Low Earth Orbit.

It would take something like Saturn V rocket to get a spacecraft + supplies towards Mars. Which is why NASA are developing the Space Launch System. 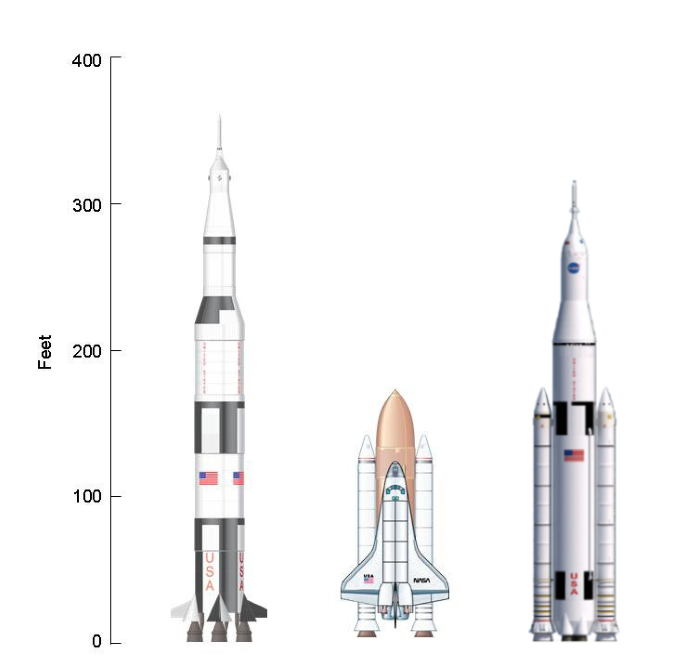