Obama’s response to Charlottesville is most liked tweet in history

posted on Aug, 15 2017 @ 11:21 PM
link
Obama’s response to Charlottesville violence is the most liked tweet in Twitter’s history 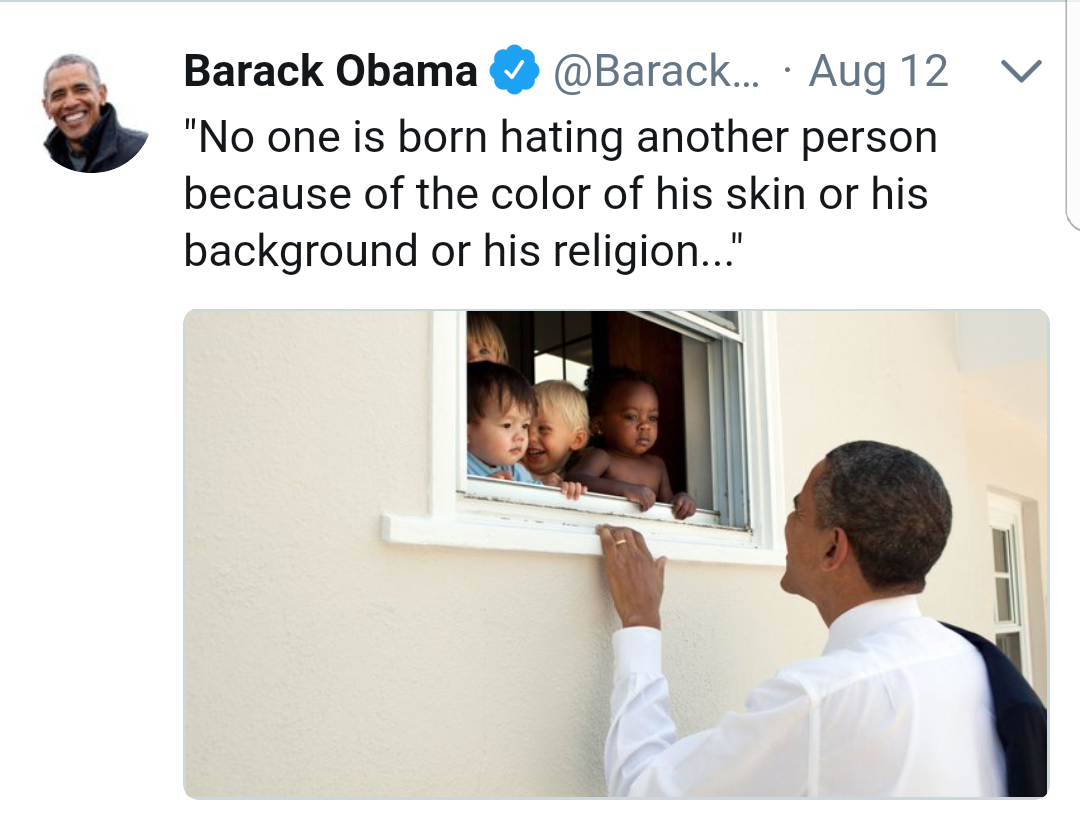 Photographer Pete Souza captured this image outside a day care in 2011.

Obama was reacting to the attack in Charlottesville.

These words speak for themselves, and clearly for many, many others.

ETA There is probably a better way to link to Twitter but I am not sure how to do that. My apologies, in advance.

originally posted by: rexsblues
I wonder why he didn't echo those same sentiments during his own term.

It is said that we surely all, stand on the shoulders of giants who led the struggles before us.

I am humbled and thankful for those shoulders in these times.

Thank you Nelson Mandela, and a (hopefully) growing list of others among us.

Love that photo, too.

It is on the Twitter platform. Sorry again I don't know how to link it properly. My kids have tried to teach me of these things. Snap Chat is way, way out of my league!

Peace and love huh? And his troops dropped bombs throughout his term as president. .

He already did far too much damage to race relations in the u.s when he was puppet in chief .

posted on Aug, 16 2017 @ 12:31 AM
link
I guess I'll just keep saying until I'm blue in the face. The biggest misnomer about this whole situation is that it is a racial issue.

Hatred is the effect, not the cause.

The left wants to usher in their authoritarian state. But, they can't do that until you present the opposition that will feed off of each other until a victor is crowned.

We know by using simple math that white nationalism, although repugnant, is not a serious threat to the well being of this country. At least in its current form (just a decade or two ago it had been marginalized to something you'd roll your eyes at on the evening news when they'd hold one of their poorly attended, pathetic "rallies" with no point or purpose). But if it were to grow and become a threat - BOY! I guess we need that leftist authoritarian state to squash those nasty racist fascists. Thus giving us leftist fascism. Which is what always seem to happen.

This has been going on for ages now. It's not new. Turn off your television and pick up a book.

In case you were born yesterday, the right tends like like a foreign boogeyman to legitimize their power whereas the left will always seize power using a domestic menace.

I'll leave you with a quote:

"I believe it to be the duty of everyone to unite in the restoration of the country and the reestablishment of peace and harmony."

posted on Aug, 16 2017 @ 12:41 AM
link
This is why Obama fails, he cannot even tweet his own thoughts into words for everyday Americans, he has to borrow others thoughts.

Same guy who promised to end war and then bombed seven countries.


Tell me more about love Obama.

originally posted by: apydomis
Is twitter in on it?a reply to: DancedWithWolves

I don't know how twitter works but if you tube can take away thumbs up from videos that aren't PC enough....I'd say yeah.

posted on Aug, 16 2017 @ 03:12 AM
link
How lame and contrite,after his 8 years this is a norm,name calling racist rants,that Obama is a stooge for CIA,NWO,he had no qualifications for a president,he was a plant,a joke played on the american people,not unlike how another socialist who was in office,liberals and lies go together

as is obamas usual mo, he refuses to name names or point fingers,


he used his expert political speaking skills to say something everyone would agree with even two opposing sides who will assume the words target the other.

why wont he condemn the violence from the left?

we have heard hundreds of times now "why wont trump condemn the violence from the right" despite that trump has many times.

Enlighten us with some sources and scenarios, and not just from what you 'thought' happened?

He did serve two terms you know. And won in a land slide.

I guess he was a bad president.

posted on Aug, 16 2017 @ 06:24 AM
link
And we all believe in twitter don't we ? No manipulation at all , that's impossible. Ignorance is bliss. Social media Pushing the memes Social media controlling the narrative.
Oh yeah , Sheepless minds minds that don't mind being manipulated by algorithms and the alphabeth soup.