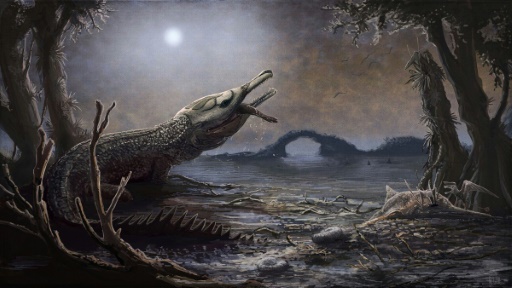 Lemmy Kilmister has been immortalized in rock history since his death in 2015 and now thanks to a team of scientists has been immortalized again this time in natural history , or perhaps Croc history ,
The scientists at the Natural History Museum in London have named the Jurassic era sea crocodile which was recently recategorized as a new species after the Motorhead frontman.

Lemmysuchus was a big (19 feet long) fearsome creature which is considered to have been one of the baddest sea predators of its time , a fitting tribute to the hard living hard drinking rocker.
I think Lem would approve.

Lemmy's croc was dug up at Peterborough in England in the early 20th century. But it was recently re-examined and found to have been incorrectly lumped with other sea crocodiles from the area.
Given that it belonged to a unique group, the creature "needed a new scientific name," said the statement.
"Natural History Museum curator Lorna Steel was still mourning the demise of her favourite band, and suggested that it should be named after her musical hero."
"Although Lemmy passed away at the end of 2015, we'd like to think that he would have raised a glass to Lemmysuchus, one of the nastiest sea creatures ever to have inhabited the Earth," the statement quoted Steel as saying.
phys.org...

It was very depressing for me to read in the local paper that Tony Iomi had unveiled a blue plaque on Lems old home in a tiny little "photo-op" kind of ceremony. A few days after the event...no publicity before!

There should have been a bit more of a fuss made of it if you ask me. Our area constantly complains about being ignored or undervalued compared to other regions. Yet here is a world famous ex resident who will be remembered for years by millions and they just couldn't be bothered. Sad.

Still...that's a good name for a big lizard. Bet he'd smile at that.

Most fitting that the curator of the museum was a fan too, excellent news! A fitting name for a rough looking beastie and I'm sure he would have approved of this.

They better name that element after him: Lemmium!!

It is a heavy metal after all! It is kind of a no brainer.

Maybe CERN might find some kind of new particle with all their experiments.
If they do, I propose they call it Lemmyatom!!!

That would be too good to be true.

Should super symmetry hold, then there should be an anti particle to that one: Anti Lemmyatom!