Jim Marrs has Passed Away


Jim Marrs (born December 5, 1943-August 2, 2017) is an American former newspaper journalist and New York Times best-selling author of books and articles on a wide range of alleged cover ups and conspiracies.[1] Marrs is a prominent figure in the JFK conspiracy press and his book Crossfire was a source for Oliver Stone's film JFK. He has written books asserting the existence of government conspiracies regarding aliens, 9/11, telepathy, and secret societies. He was once a news reporter in the Dallas–Fort Worth Metroplex and has taught a class on the assassination of John F. Kennedy at University of Texas at Arlington for 30 years.[2] Marrs is a member of the Scholars for 9/11 Truth.[3]


Thoughts with his family. 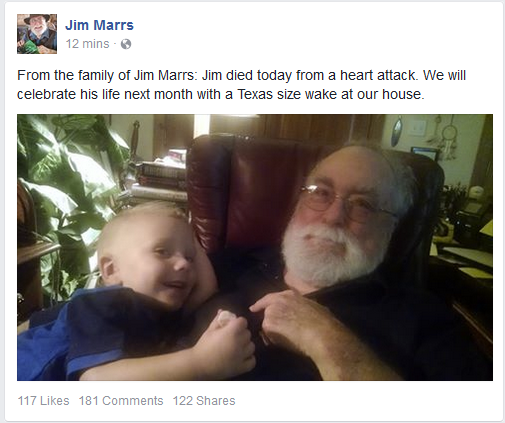 Can't express my sympathies enough for those closest to him. We lost a legend today.
Cause of death seems to be from a massive heart attack.


Acclaimed investigative journalist and beloved member of the conspiracy theory and UFO research community, Jim Marrs, has passed away. After several years working as a reporter for a variety of Texas newspapers, Marrs achieved worldwide notoriety for his landmark book Crossfire, which examined inconsistencies in the official story of the JFK assassination. A New York Times bestseller, Crossfire, proved to be so powerful that it served as the basis, along with another book, for the Oliver Stone film JFK. Marrs went on to write a pair of highly influential works in the form of Alien Agenda and Rule by Secrecy as well as one of the first books on the US government's remote viewing program with Psi Spies. In the wake of 9/11, Marrs turned his attention to that tragic event and uncovered a wealth of information which suggested that something was amiss with the 'official' version of events, which was brought together in the book The Terror Conspiracy. Through later books like Rise of the Fourth Reich, Our Occulted History, and Population Control, he warned about the surreptitious and worrisome nature of the 'New World Order' and various ways in which the 'powers that be' seemed to be advancing their agenda. An indefatigable researcher, Marrs produced a number of additional works in recent years, including a fiction offering titled Sisterhood of the Rose. A fixture of Coast to Coast, he appeared on the program on over 40 different occasions, detailing his latest findings for C2C listeners as well as participating in panel discussions on the JFK assassination and the UFO phenomenon. An undisputed giant in the field of esoteric research, Jim Marrs will be deeply missed by his many friends in the paranormal and conspiracy community as well as the countless readers and Coast listeners who were enlightened by his work.

His presence in the conspiracy world will be missed. Prayers to the family

Rest in peace Jim. You will be missed.

Thank you for all that you did, all of the wisdom and fascinating ideas.

He was a conspiracy author who frequented here for many years.

R.I.P.
Now he has all the answers.

Though I didn't always agree, I do respect Jim's views and ideas.

I am deeply saddened and pass my respects on to his family.

posted on Aug, 2 2017 @ 06:31 PM
link
May your everafter be as special as you are Jim, RIP. Prayers to all his friends and family. His loss will be felt around the world.

Nothing on his Facebook. Just that he has been sick.

Because of the crumbling economy, and because so many people are now waking up and realize that no matter whether they vote for a democrat or republican they seem to get the same socialist programs, they are now beginning to realize that there is a whole different paradigm than what is portrayed in the corporate mass media.

And so, the question is, why am I talking about The Fourth Reich at a UFO Congress? And I think the answer is because people who disregard the subject of UFOs and who just write that off as just total fantasy and lunacy; they will never, ever, be able to figure out what’s truly happening in the world because they’re tossing out a big piece of the puzzle. It’s all part of the same big mosaic and you have to put all these pieces together to figure out what’s going on.

Just as a “for instance”: I truly believe that one of the main reasons for our precipitous invasion of Iraq was to make a beeline for Baghdad, and use a mob scene as a cover, for a very concerted effort to loot the Iraqi National Museum. What were they after? They were after newly discovered artifacts, tablets, scrolls and such that were being found in the ancient Sumerian cities of Uruk and some of these other places by French and German archaeological teams -- interestingly enough, the two countries who were most opposed to our entry into Iraq.

And what was taken? Very possibly knowledge of ancient energy manipulation technology. And this gets into anti-gravity and a bunch of weird and exotic technologies that conventional science would laugh at. But then, when you really study the issue, you find that these technologies have been worked on since at least World War II and have been kept under very ultra-secret classification programs ever since, because this is our leading edge technology.

So, you can see how it all ties together; Ancient history, UFOs, secret societies, the world government. It’s all part of the same big ball of wax, and unless you back off and take that broad overview and study a wide variety of topics, you’re never going to figure out what’s going on.

The Rise of the Fourth Reich in America
Laughlin, Nevada, February 2009

edit on 3-8-2017 by eisegesis because: Thanks for the update JinMI

I sent a U2U to DToM. When more is publicly available, I will post.

I realize it's not the usual fare during this sort of event, my apologies.

posted on Aug, 2 2017 @ 06:43 PM
link
Truly one of the great men of journalism. I will miss hearing his reports on the various radio shows he frequented.
My respects and deepest sympathy to his family.

I still have your books though, so you are never truly gone.