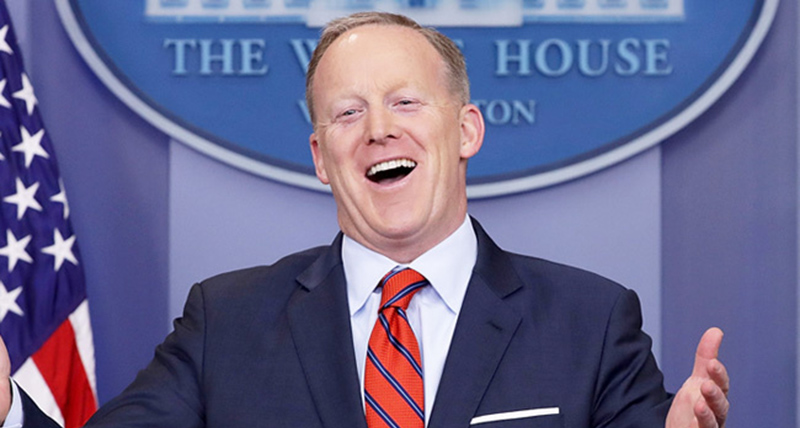 I'm sure Sean Spicer is laughing maniacally right about now between episodes of the uncontrollable PTSD (Post Trump Stress Disorder) induced tics. As you dear readers have no doubt already intuited from the title, Trump's new WH Comm Director, Anthony "the Mooch" Scaramucci, unburdened himself to New Yorker reporter Ryan Lizza in a rant where he ironically said he wanted to "kill leakers."

I'm assuming from the content of the tweet where he confirmed that he'd been blabbing, Mooch thought it was off the record. Apparently, it was not as all the gory details were published earlier this evening and it's pretty hilarious.

First he threatened to fire everyone on the comms team if Lizza didn't finger the "senior official" who'd leaked to him that Scaramucci, Hannity and Bill Shine were having dinner at the WH with the Presi-dunce and his (third) First Lady. Then he tried appealing to the reporter's sense of patriotic duty?

Who leaked that to you?” he asked. I said I couldn’t give him that information. He responded by threatening to fire the entire White House communications staff. “What I’m going to do is, I will eliminate everyone in the comms team and we’ll start over,” he said. I laughed, not sure if he really believed that such a threat would convince a journalist to reveal a source. He continued to press me and complain about the staff he’s inherited in his new job. “I ask these guys not to leak anything and they can’t help themselves,” he said. “You’re an American citizen, this is a major catastrophe for the American country. So I’m asking you as an American patriot to give me a sense of who leaked it.”

Then, getting himself a bit worked up, Mooch took a jab at Priebus:

“Is it an assistant to the President?” he asked. I again told him I couldn’t say. “O.K., I’m going to fire every one of them, and then you haven’t protected anybody, so the entire place will be fired over the next two weeks.”

I asked him why it was so important for the dinner to be kept a secret. Surely, I said, it would become public at some point. “I’ve asked people not to leak things for a period of time and give me a honeymoon period,” he said. “They won’t do it.” He was getting more and more worked up, and he eventually convinced himself that Priebus was my source.

“They’ll all be fired by me,” he said. “I fired one guy the other day. I have three to four people I’ll fire tomorrow. I’ll get to the person who leaked that to you. Reince Priebus—if you want to leak something—he’ll be asked to resign very shortly." The issue, he said, was that he believed Priebus had been worried about the dinner because he hadn’t been invited. “Reince is a f-----g paranoid schizophrenic, a paranoiac,” Scaramucci said. He channelled Priebus as he spoke: “ ‘Oh, Bill Shine is coming in. Let me leak the f-----g thing and see if I can c--k-block these people the way I c--k-blocked Scaramucci for six months.’ ” (Priebus did not respond to a request for comment.) 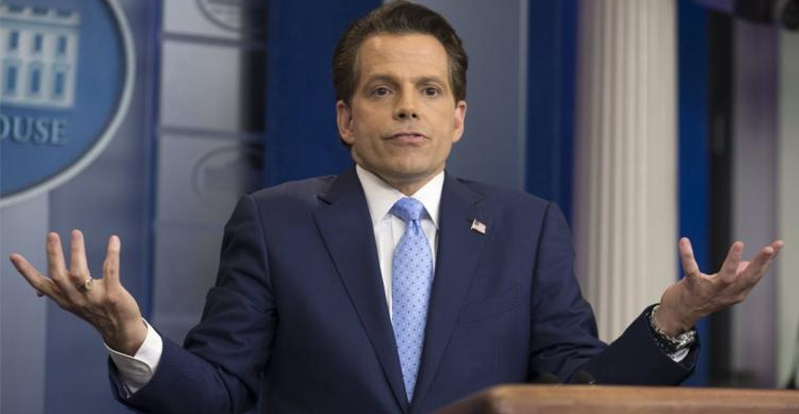 Priebus wasn't the only senior member of the administration that Mooch vented about:

Scaramucci also told me that, unlike other senior officials, he had no interest in media attention. “I’m not Steve Bannon, I’m not trying to suck my own c--k,” he said, speaking of Trump’s chief strategist. “I’m not trying to build my own brand off the f-----g strength of the President. I’m here to serve the country.” (Bannon declined to comment.)

Don't worry Mooch, that's what every says about Bannon. Believe me. It's true. In contrast to Bannon and Priebus — and this should make all the Trumpkins happy — it seems Mooch is a true believer:

I got the sense that Scaramucci’s campaign against leakers flows from his intense loyalty to Trump. Unlike other Trump advisers, I’ve never heard him say a bad word about the President. “What I want to do is I want to f-----g kill all the leakers and I want to get the President’s agenda on track so we can succeed for the American people,” he told me.

I can only assume the same folks who incessantly misconstrue a statement about "making an example" of a leaker from a 2015 Podesta email to somehow link it to the death of Seth Rich are going through hysterics of their own right now? Naaaah. Standards are for everyone else. This is the reality TV clown show White House of Donald the Terrible! 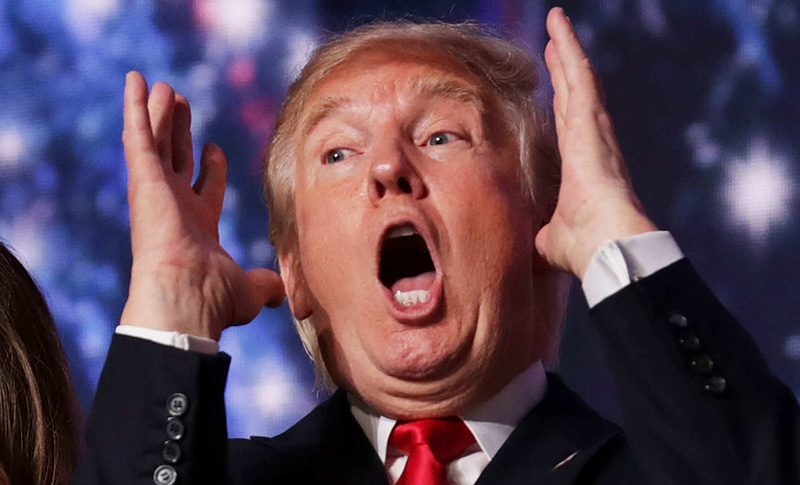 Poor Spicy, DWTS ain't got s# on the entertainment value of this debacle.
edit on 2017-7-27 by theantediluvian because: (no reason given)

posted on Jul, 27 2017 @ 09:55 PM
link
Mooch just doesn't care. He's got absolutely nothing to lose in this game. Expect him to continue being himself ... or go back to his old life where he can be his old self and remain unchallenged.

We need more people like him in government and less of the paranoiacs.

Haha, this is the guy in charge of white house communications? That's rich.

Hangover is guaranteed but, oh well.

posted on Jul, 27 2017 @ 10:09 PM
link
bannon is a huge advocate of sessions, a poster boy of far right wingnut, and i was reading earlier how bannon could turn on team trump for the treatment of his boy toy.
this looks preemptive and ties into the story.

Honey, it's time to get the kids out of the TV Room -- the White House presser is starting.

posted on Jul, 27 2017 @ 10:15 PM
link
Sure, lets just take the word of a reporter. Unless you heard it from the horses mouth don't believe what this guy is telling you. If he has a tape then he should provide the conversation. And I agree with Scaramucci, he should reveal the source if he wants to protect this country. The leaks need to stop.


“I’ve asked people not to leak things for a period of time and give me a honeymoon period,” he said. “They won’t do it.” He was getting more and more worked up, and he eventually convinced himself that Priebus was my source.

HAHA! Trump didn't get a "honeymoon"! Why should you!

Whoooooo boy! This is like a ride at the Ohio State Fair!

Obviously standards are not for you either but that is beside the point.
I hope Mooch does fire all of them until the leaks stop.
It's all good....Trump and the people on his team that are loyal to him will get it right eventually.
This is to be expected when everyone is trying to undermine him, the status quo politicians are afraid he will upset their applecart.
The next step is to find out who is paying these leakers to leak....Clinton?...Obama?...Soros?...all of the above?
Because they are not doing it for the good of the country.

posted on Jul, 27 2017 @ 10:32 PM
link
I'm starting to think Trump put Scaramucci in position just to show that other people can be loose cannons too. To kinda normalize the behavior.

Scaramucci's face constantly projects "I have soooo much dirt waiting to be found!". Random thought.

originally posted by: AgarthaSeed
I'm starting to think Trump put Scaramucci in position just to show that other people can be loose cannons too. To kinda normalize the behavior.

Scaramucci's face constantly projects "I have soooo much dirt waiting to be found!". Random thought.

With this and all the other nonsense going on this week, the conspiracy theorist in me thinks Trump is just trying to control news cycles to distract from the Health Care debacle.

However, I fail to see how any of this helps Trump, so it's probably just more unplanned chaos. First he tries to announce military policy via tweet, then The Mooch further ramps up the idiocy.

What's next? Will the entire administration come piling out of a clown car?
edit on 27-7-2017 by Dudemo5 because: (no reason given)

Whats not good about getting rid of the undermining leakers?

Whats not good about getting rid of the undermining leakers?

What has been leaked that isn't little more than having some transparency?

If it wasn't for leakers, the government would be surveilling the country unbeknownst to us while they operated with impunity.

I don't know why people defend Trump so much.

His administration is a rocking ship at all times.

I thought this dude was supposed to run the country like a business, if so this is awful managing.

I made a mistake in trusting in a reporter. It won't happen again.

Rookie mistake any White House Director of Communications would make.

originally posted by: theantediluvian
a reply to: Diabolical1972

Immaculate grammar, another good trait of a communications director.


If it wasn't for leakers, the government would be surveilling the country unbeknownst to us while they operated with impunity.

You must be talking about Obama's former administration.
Because that is what they did.


I thought this dude was supposed to run the country like a business, if so this is awful managing.

Almost 8 months in to his Presidency, Trump has been undermined every step of the way from the Democrats, leakers etc......pretty much everyone that still has a red ass from him winning including some people on the Republican side as well.
Trump and his team will get the ship running right once all the people that are basically trying to stage a bloodless coup are stopped.
Is the way he is going about it unconventional?....sure is but the level of radical undermining being thrown at him is unprecedented in American political history.
When these people are crying about Trump as bad as they are, it's clear the right choice was made by electing him.
Not one of them wants to lose their free ride.