page: 1
66
<<   2  3  4 >>
log in
join
share:
OrionHunterX
+46 more
posted on Jul, 24 2017 @ 02:59 AM
link
Guys! This is beyond incredible. NASA had released a 1.5 Gigapixel image of the Andromeda Galaxy a year or so ago but I wonder how many have chanced upon it? It's so mind boggling that it makes one think how small and insignificant we earthlings are in this huge huge universe!

Before I take you to the link, let's see if we are the lone technological civilization in the universe (as most suggest!) Well, we’ll need to comprehend the vastness of the universe to understand the probability of not only life but intelligent life that is technologically advanced. So lets get started.

How Big Is Our Universe? So huge in fact that we'd need to play around with scales to get a better idea.

According to the standard inflationary model of cosmology, the visible portion of our universe; the one mapped by our telescopes is an infinitesimally small speck in a much larger universe of at least a 10 to the power 35 light-years across! I admit this number is really, really big, and almost impossible to imagine. So let’s shrink everything down, WAY down, just so we can get a better grasp of it. Let's imagine that the entire universe that we have seen in all the world telescopes, all the galaxies, all trillion of them, extending out 13 billion light years in every direction is shrunk down to the size of a golf ball.

Some physicists such as Max Tegmark believe the universe is actually infinite in size. If the galactic density of our own neighborhood is typical across this entire domain, and according to the data from the satellite COBE, then our bubble-universe should contain at least another 10 to the power 100 galaxies. This is such a large figure, that it's difficult to explain.

Even if intelligent life is very, very rare, a number as large as 10 to the power 100 is still likely to produce an abundance of life throughout the universe. A place where countless lifeforms evolve beyond their womb planets into highly advanced space-faring civilizations.

For arguments sake, lets imagine that primitive life happens once in the lifetime of a trillion galaxies, and out of those only one in a trillion ever evolves out of its womb planet into a space-faring civilization. In this example then we are still left with an astounding 10 to the power 75 advanced societies - more technologically advanced alien cultures than the number of atoms composing planet Earth and then some!


NASA has released the largest and sharpest photograph ever made of the Andromeda Galaxy, the nearest spiral galaxy to ours that contains an estimated 1 trillion stars. The new image weighs in at 1.5 gigapixels (i.e. 1.5 billion pixels); it’s so big that you would need 600HD televisions to display the entire digital photo.

Captured by the Hubble telescope, the image shows over 100 million stars and thousands of star clusters. NASA has released the largest and sharpest photograph ever made of the Andromeda Galaxy, the nearest spiral galaxy to ours that contains an estimated 1 trillion stars. The new image weighs in at 1.5 gigapixels (i.e. 1.5 billion pixels); it’s so big that you would need 600HD televisions to display the entire digital photo.

And keep in mind that this is just a 40,000 light year section of the whole spiral galaxy!.

Here's the section of the Galaxy..... 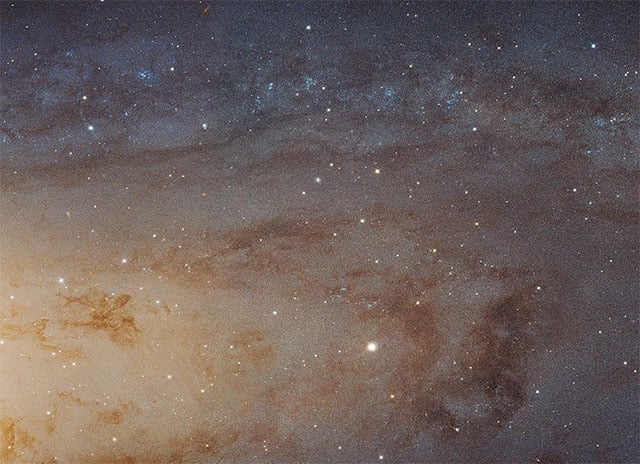 And here's that section of the Andromeda Galaxy in all its glory, in the link below. Use the slider to zoom in........

Astronomers admit: We were WRONG—100 BILLION habitable Earth-like planets in our galaxy alone!

NASA Has Released The Largest Picture Ever Taken. It Will Rock Your Universe!

Another good starting place towards appreciating scale is here in our own little corner of space. A guy called Josh Worth created a site for people to scroll through our system from the Sun to Pluto and it takes a long time! I timed it at 4 minutes and 40 seconds to reach Earth from the Sun which means we're travelling almost twice the speed of light (8 minutes to Earth from Sun) and it still feels SLOW.

If the Moon Were Only 1 Pixel - A tediously accurate map of the solar system.

The sheer mind-numbing scales of space and the universe leave me feeling marooned. It's the sensation someone must have when they're on a tiny island with nothing more than ocean on all sides. Yes, part of me feels awe at the beauty of it all and it touches the old heart strings. Underlying the awe is a sadness at how isolated we are here and how profoundly precious this planet is.

Do you have a better way? How exactly would you suggest someone goes about capturing 61 000 light years across in so much detail in one shot?

It's CGI, it MAY look like they think it does based on the numbers in the machines they use to collect the data. 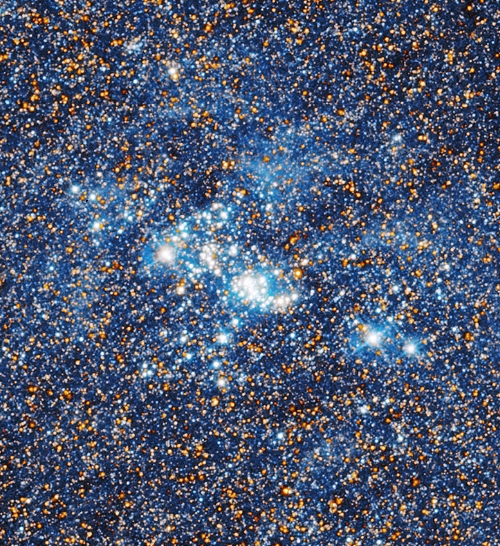 I think you can also see the associated reflection nebula there.

Why do you keep saying we can see it when we can't, we can only observe the data of the tools they use to collect the data in the first place with someones thought up idea of what the data is suppose to look like.

The only thing you are looking at in that picture is a computer image someone create. You are not looking at the actual stars themselves.

Why is it so hard for you to say that?

posted on Jul, 24 2017 @ 06:44 AM
link
And a digital camera is creating a picture based on the a number value of energy it senses at a small spot and creates a picture.

That should be bogus as well but people believe their selfie is an accurate representation.

Why don't you do us a favor and explain the difference between both of the process rather than throw out that strawman?

I was just looking around the image and began to zoom in on various parts. I then began to notice what "appears" to be trails, much like the animal trails you will find in a forest. These could be just caused by any number of things or they could be nothing at all. I just thought I would point this out to see if I were the only one to notice it.

All digital photos are CGI. CGI is Computer Generated Imagery.

The same as a photo on a digital camera or mobile phone.

Why don't you do us a favor and explain the difference between both of the process rather than throw out that strawman?

Or you could research how digital cameras capture an image. That way you might believe the point.
edit on 7/24/2017 by roadgravel because: typo

NASA commissioned two Zeiss 0.7mm lenses in the 1960s (Zeiss actually ended up making 10) for Hubble's deep-space-long-exposure photography. They have the widest aperture of any lens ever made, making it the best, most efficient lens in the world for low lighting photography. In this case, deep space photography.

That they would use an algorithm to stitch together real/CG composites isn't really shocking. The bulk of it is probably, in fact, real photographs.

After making 2001: A Space Odyssey, Kubrick had made some friends at NASA and while filming A Clockwork Orange he managed to get his hands on one of the Zeiss lenses.

He actually took apart (destroyed) and reassembled a $250,000 film camera from the 1950s, just to be able to mount this Zeiss lens onto a camera to be used for motion picture filming.

The first time in the history of cinema that someone actually managed to film a scene lit by candlelight and only candlelight, as true to the late 18th century period of which Barry Lyndon (1975) was based:

Zeiss actually managed to recover some of them, and now they are available for rent. However, with cinema leaning more toward digital vs film, the necessity of a lens specific to dim light is becoming more and more useless.

The reason I am posting all of this is to point out that NASA itself no longer shoots its deep space photography with film. Hence, the reason for the CGI algorithm composite.

It would be interesting to know more about how they produced the image in the OP. But, they rarely comment publicly on such matters.

All digital photos are CGI. CGI is Computer Generated Imagery.

The same as a photo on a digital camera or mobile phone.

In the case of digital cameras, they do not create the light that they are capturing, therefor the images captured are not CGI.