The maximum point of the eclipse will take place near Hopkinsville, Kentucky at 18:20 UTC, which is 1:20 pm local time. Here, totality will last for 2 minutes and 40 seconds. 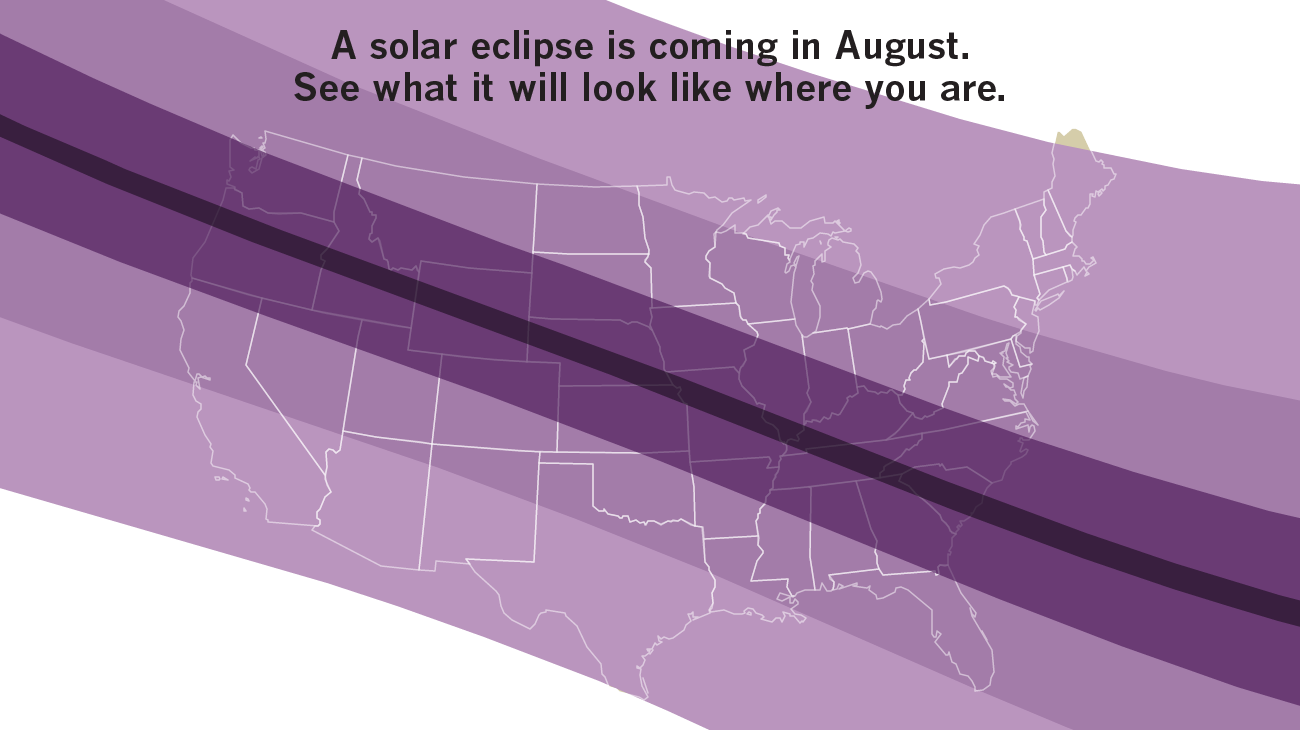 Here is a video of the path for those who will see a total eclipse:

The eclipse will begin over the Pacific Ocean at 15:46 UTC, which corresponds to 8:46 am Pacific Time. It will reach the coast of Oregon at Lincoln City, just west of Salem, at 9:04 am local time. The eclipse will reach its maximum point here at 10:17 am.

From here, the Moon's central shadow will move inland. The following table shows when the Moon will begin to move in front of the Sun and the moment it completely covers the Sun, as seen from some locations along the central path of the eclipse. All times are local.

originally posted by: Plotus
Hmmmm, isn't there some alignment of planets too, regarding the 'End Days' too to go with this ?

I'm trying to think positive. This is when I get my magic powers.

posted on Jul, 23 2017 @ 05:25 PM
link
a reply to: Outlier13
You are being spoiled. The last one we had just touched the tip of Cornwall and made the fortunes of thousands of Cornish landladies.

posted on Jul, 23 2017 @ 06:04 PM
link
Without waxing too lyrical, I would advise anyone that is in the region or close to it to take the trouble to go witness one of the strangest, most beautiful things one can witness while walking this earth. I saw one once and it truly was a thing of deep, profound beauty. And nothing but totality zone or it don't count. Fred Espenak knows...

bunch of crazy in that video and comments

posted on Jul, 23 2017 @ 06:26 PM
link
a reply to: Outlier13
I'm less than an hour from Hopkinsville and from the media folks around here you would think it is going to be a major disaster. The local tv station is warning people to "Prepare" for that day as though a blizzard was coming through. www.wpsdlocal6.com...
These types of warnings have been coming out for at least a month now. What is kinda comical to me is the fact that when these warning are put out before approaching ice/snow events, they largely get ignored. Those who are prepared usually stay prepared and those who don't prepare suffer the consequences.

I'll be staying at home but that's always my plan. Wishing the best for those who must travel. Be safe on the road and viewing the eclipse.

posted on Jul, 23 2017 @ 06:55 PM
link
We can drive for a short while, and be in the total zone, and likely it will be mostly complete where we are as well, so looking forward to this!! Not something you see every day. I recall seeing a partial one while in HS, way back in the dark ages.

posted on Jul, 23 2017 @ 06:55 PM
link
Husband and I will get 1min, 49sec of totality at our location. We will be observing from our back patio. We are hoping for a clear day, but it will be late August. Such days are not uncommon. Our kiddo will be in school, and I would think that they would be observing this somehow. It would be a crime if they don't as rare an occasion as this is and as perfectly placed as we are.

I invited my parents to come and view it with us, but I don't know if they will.

Agreed. It is an exceptionally surreal event.

Husband is getting a paid holiday that day because the town he works in is right in the path of "best viewing" as IDed by astronomy experts. So, a town of roughly 76,000 is expecting to be crushed by as many as 500,000 people that day. The town itself requested that most major businesses ask all non-essential personnel to stay home that day. They are already starting to tell people out and about that day NOT to stop on the roads to view it, but to keep driving.

Where we are at is about 40 minutes south of where he works, so our viewing is not perfect. But, I still plan to take the day off so I'm not out on the roads at all that day. All those people have to come through the major roadways, and I don't want to be caught in any of that trying to just get to work.
edit on 23-7-2017 by ketsuko because: (no reason given)

Also rare. The next total eclipse in my location (The Netherlands) is something like 2080. I'll be 110 then.I missed the one in Belgium in 1999 by like 15 minutes so ended up going to Zimbabwe in 2000 or 2001. Magnificent. A heavenly display. To view optimally it is better to buy those silly plastic glasses but you can use welding masks, negatives or other things to view the transition, totality and transition again.

Magical, majestic, mysterious and marvellous. If you can be there, do not be square! Or round because close to totality even round stops being round. Do I sound crazy yet? Good!
edit on 23/7/17 by LightSpeedDriver because: Typo


Indeed. Watching the rapidly approaching darkness is amazing and frightening. The experience made my knees go weak!

posted on Jul, 23 2017 @ 07:39 PM
link
I've only seen a partial eclipse
Doesn't look like my location in Vancouver Canada will observe a dark shadow. Won't be able to get to Oregon

EDIT
ok good to know I'll get to observe 90% . Thought I'd read earlier I would

The luckiest Canucks are those in Vancouver, who will see nearly 90 per cent of the sun go dark around 10 a.m. PST. As the eclipse moves farther east, the sun should be obscured by about 80 per cent in Regina, 70 to 75 per cent in Edmonton, Winnipeg and Toronto, 60 to 70 per cent in Ottawa or Montreal, and finally 60 per cent or less in Quebec City, Halifax and St. John’s.


Indeed. Watching the rapidly approaching darkness is amazing and frightening. The experience made my knees go weak!

Must be like a big mother ship passing over

Wish I could, but it's a long drive and on a week day I was once right in the path of an annular eclipse and that experience was pretty remarkable, watching our back yard get dark right in the middle of the day.

posted on Jul, 23 2017 @ 08:25 PM
link
a reply to: Jiggly Jiggly did you watch it through ? I spent the 20 + or - minutes it was. He is pretty astute, with the ability to be easily understood. I would look again, this is the best consolidation of this type of information that I have ever come across to date, regardless if you are atheist, agnostic or believer.


And yea, it makes my head hurt too. but all his stuff works out, his dates, his math, it's almost scary. If you happen to be a believer..... not so much.