Burnings on bone and antler

page: 1
20
log in
join
share:
skalla
+1 more
posted on Jul, 23 2017 @ 01:33 PM
link
Seems a few folk here got pyrography irons (heat pens for decorating wood, leather etc) lately and i'm one of them. I shelled out a mighty £16 on one with decent reviews - not a fancy one with wire nibs but a soldering style one with screw in tips (maybe 12 or so), thinking it'll not only be fun, but maybe i can add value to some of the stuff i sell by personalising things.

It aint hard to use, it's just a very thick pen that gets bloody hot, the trick is how slow you have to go on stuff like bone and get a decent mark, and not burning or melting stuff too much. Wood burns pretty fast, but for bone you have to go to the higher of the two settings and really let it build heat before you start.

And prep is key - surfaces have to be -smooth- and skimping on sanding through the grits is futile.

So here is my first go, earlier this week - just decorating the edges of an antler bead - its a lovely feeling to build up marks and shades with these things 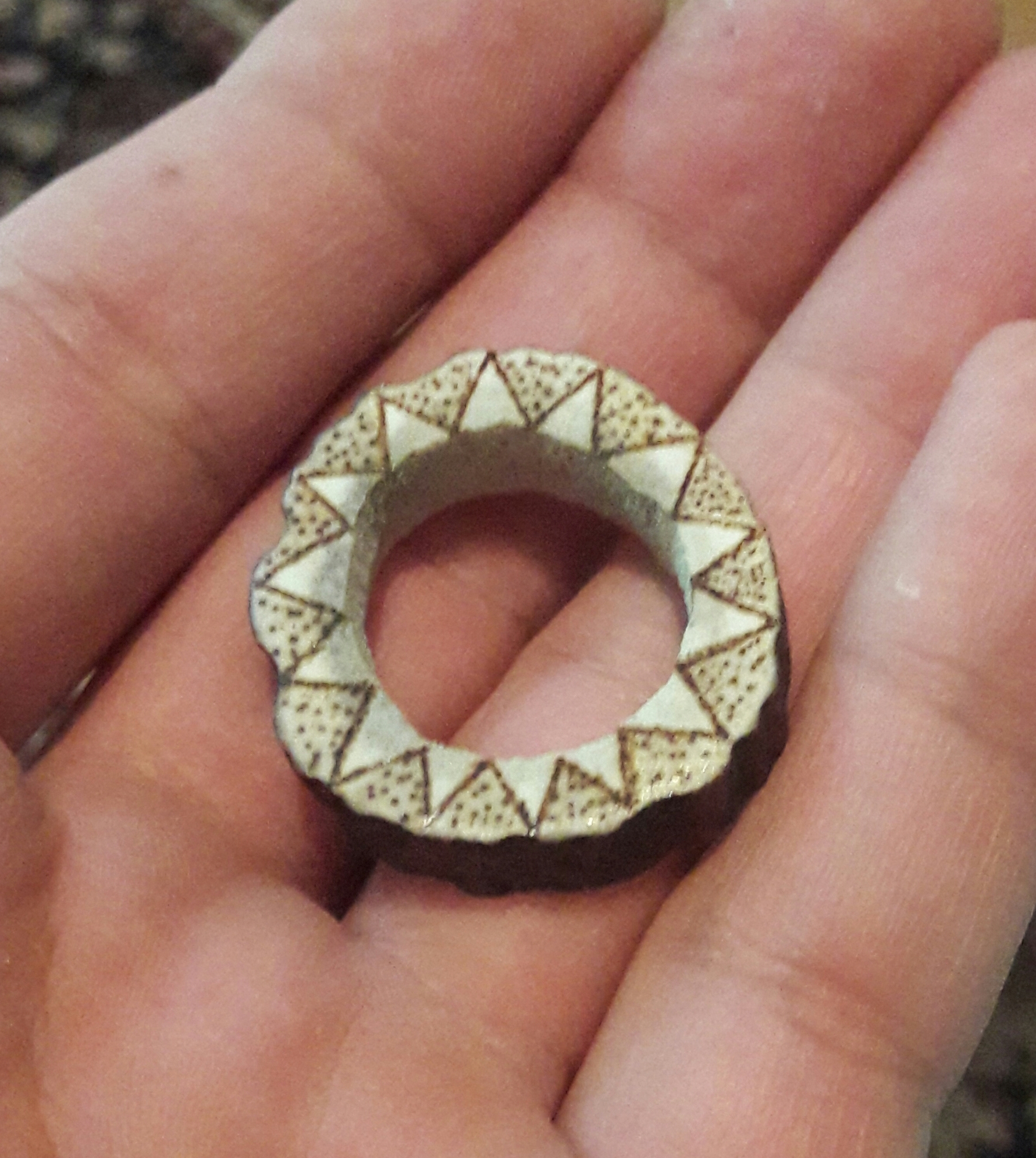 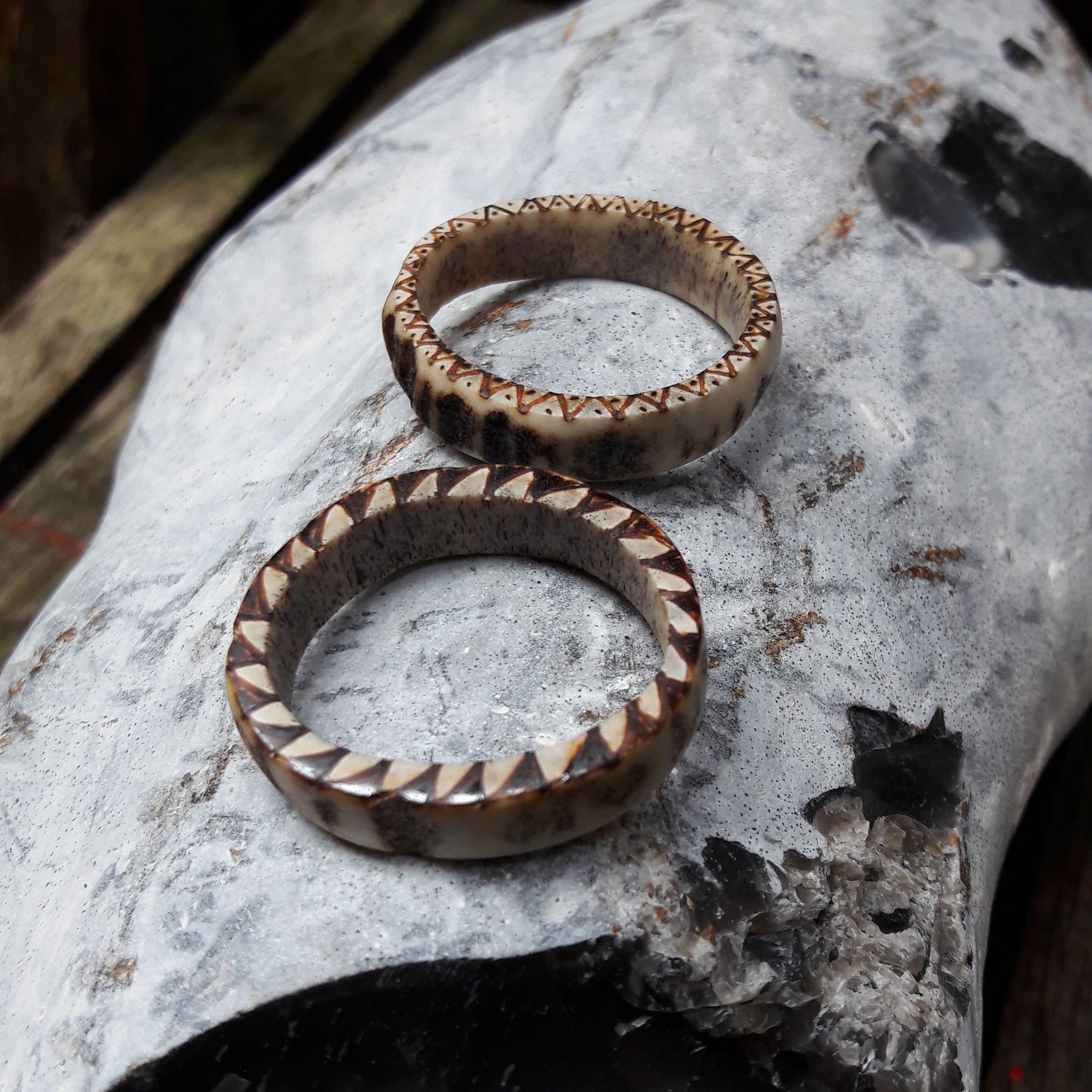 and i love the effect - i'll be making these into simple pedants i reckon, it's real nice how the burned surface is left slightly melted as it smooths it and makes it all shiny.

So i thought i'd try runes on antler rings yesterday, because vikings 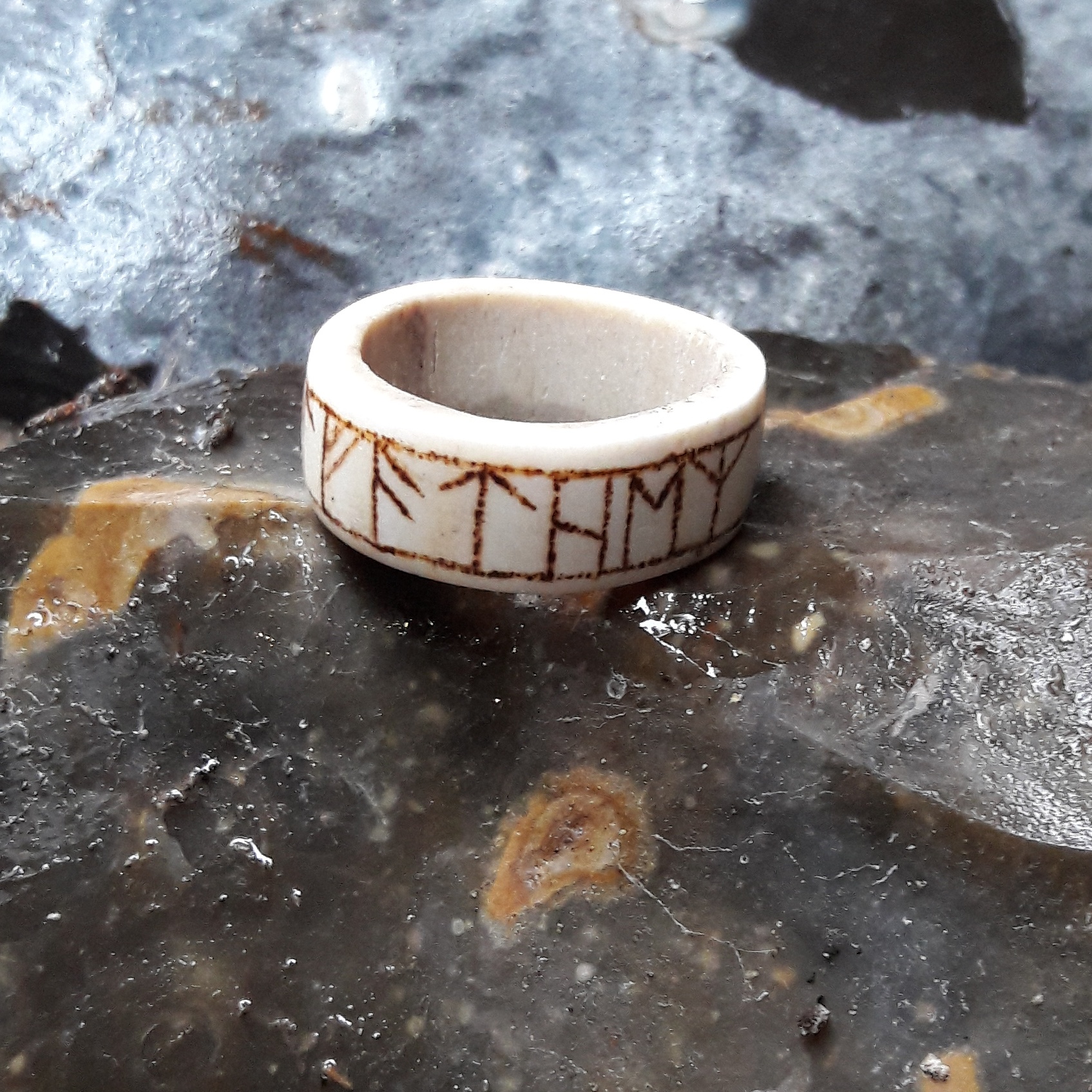 And this was slooow, the horizontal bands were a right pain, but i'm super happy with the result, i just wish the ring fitted me and i hadnt just grabbed a random blank

And then i prepared a bunch of pendants, from bone and antler scraps. Took a fair while to get these ready as polishing bone by hand takes time.. 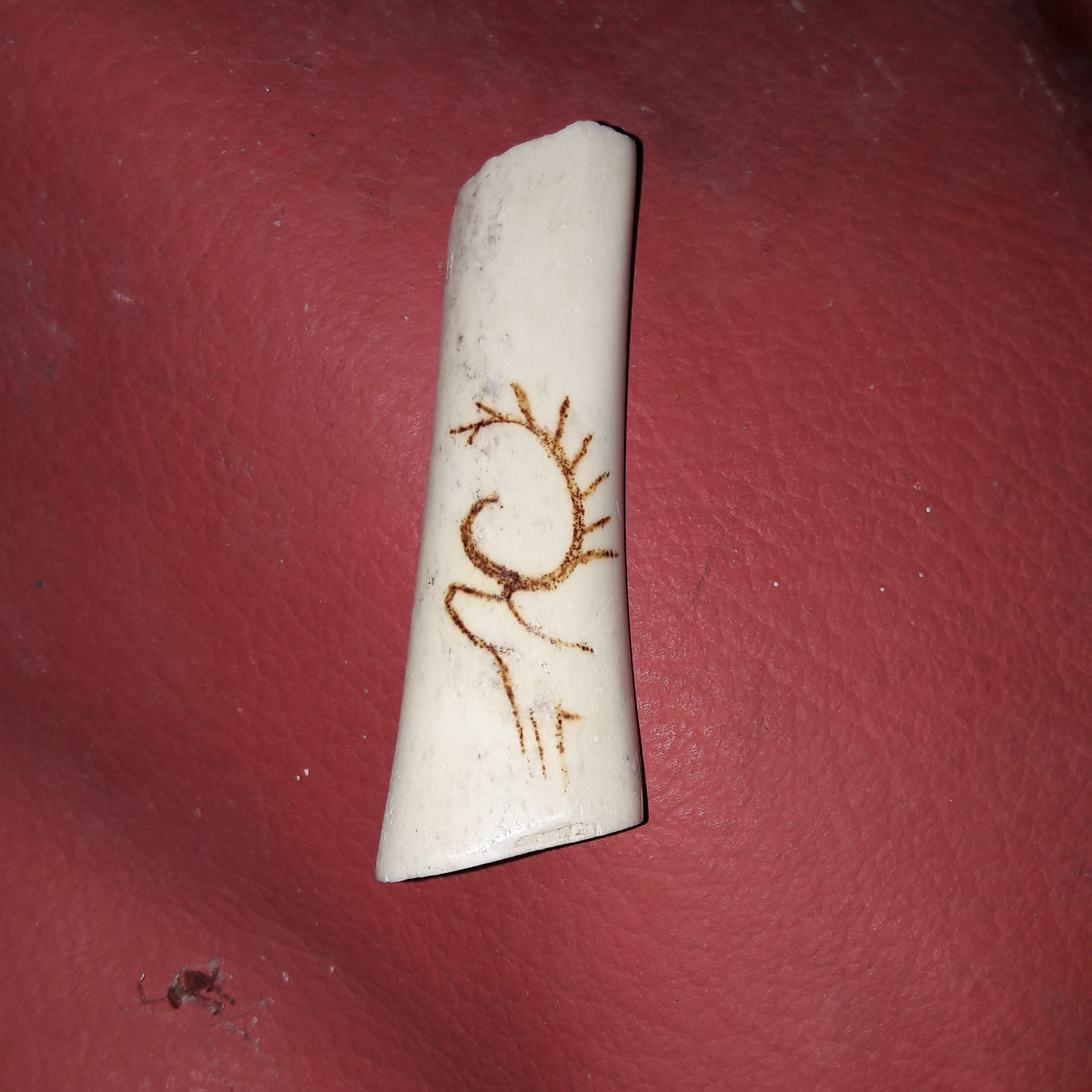 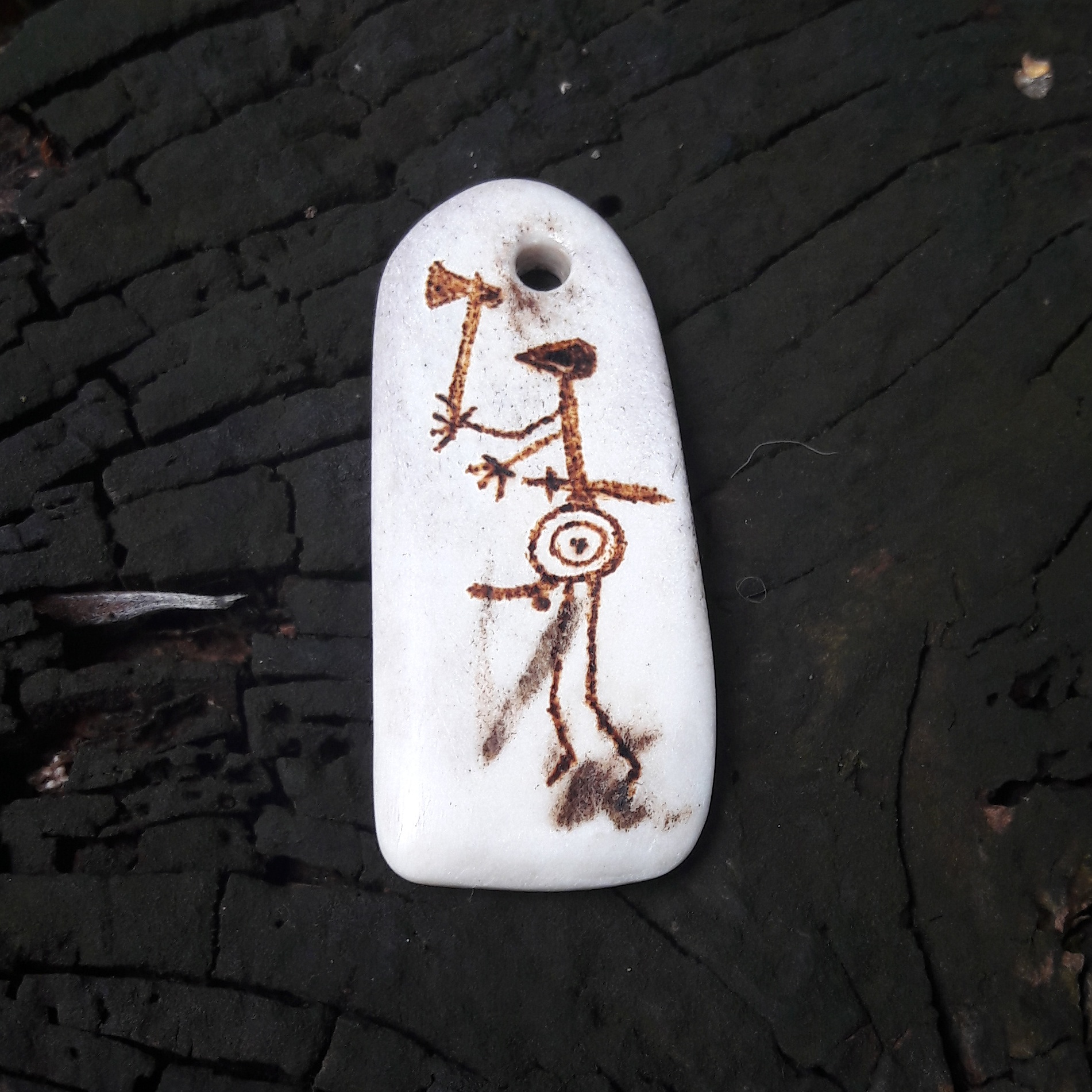 this one went a touch wrong 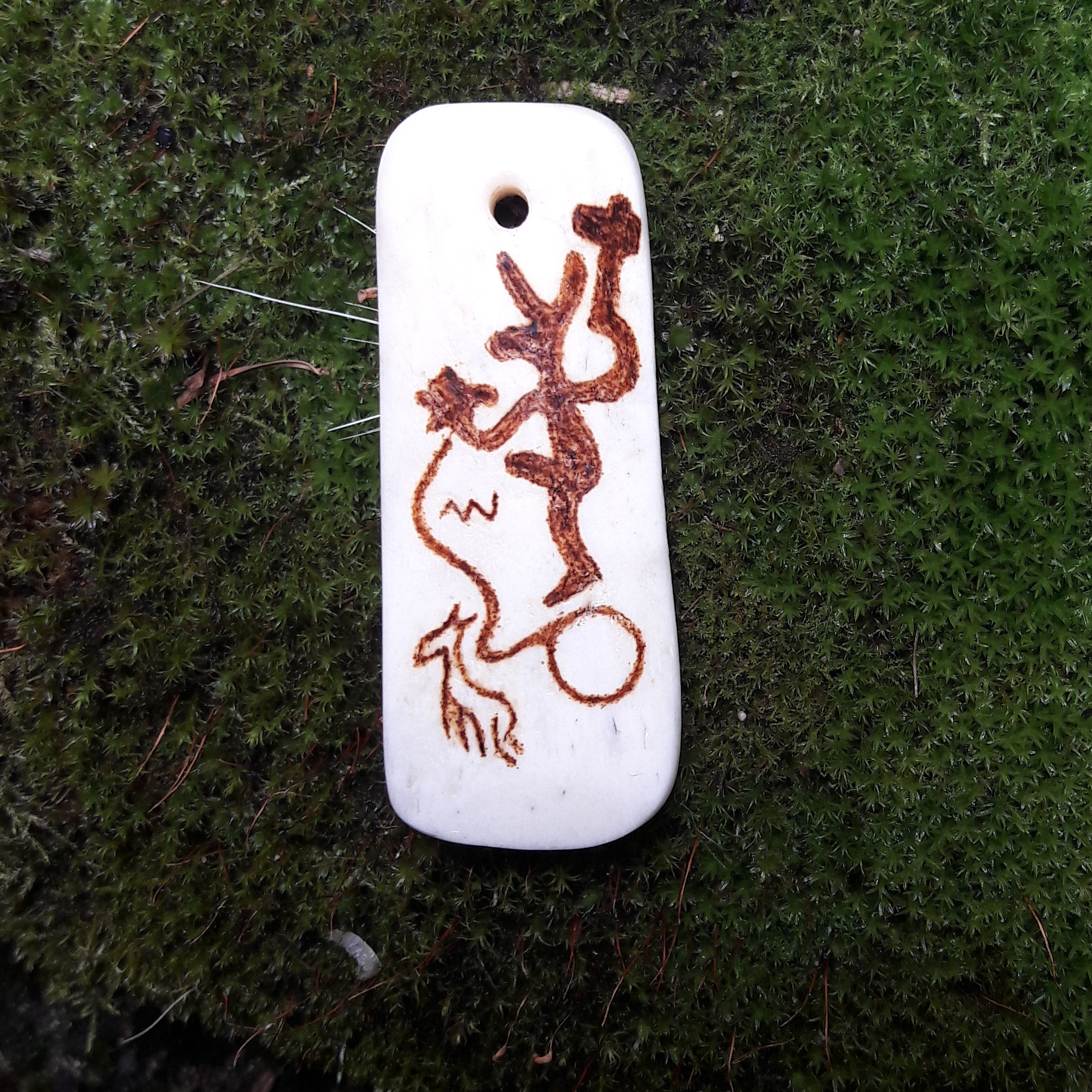 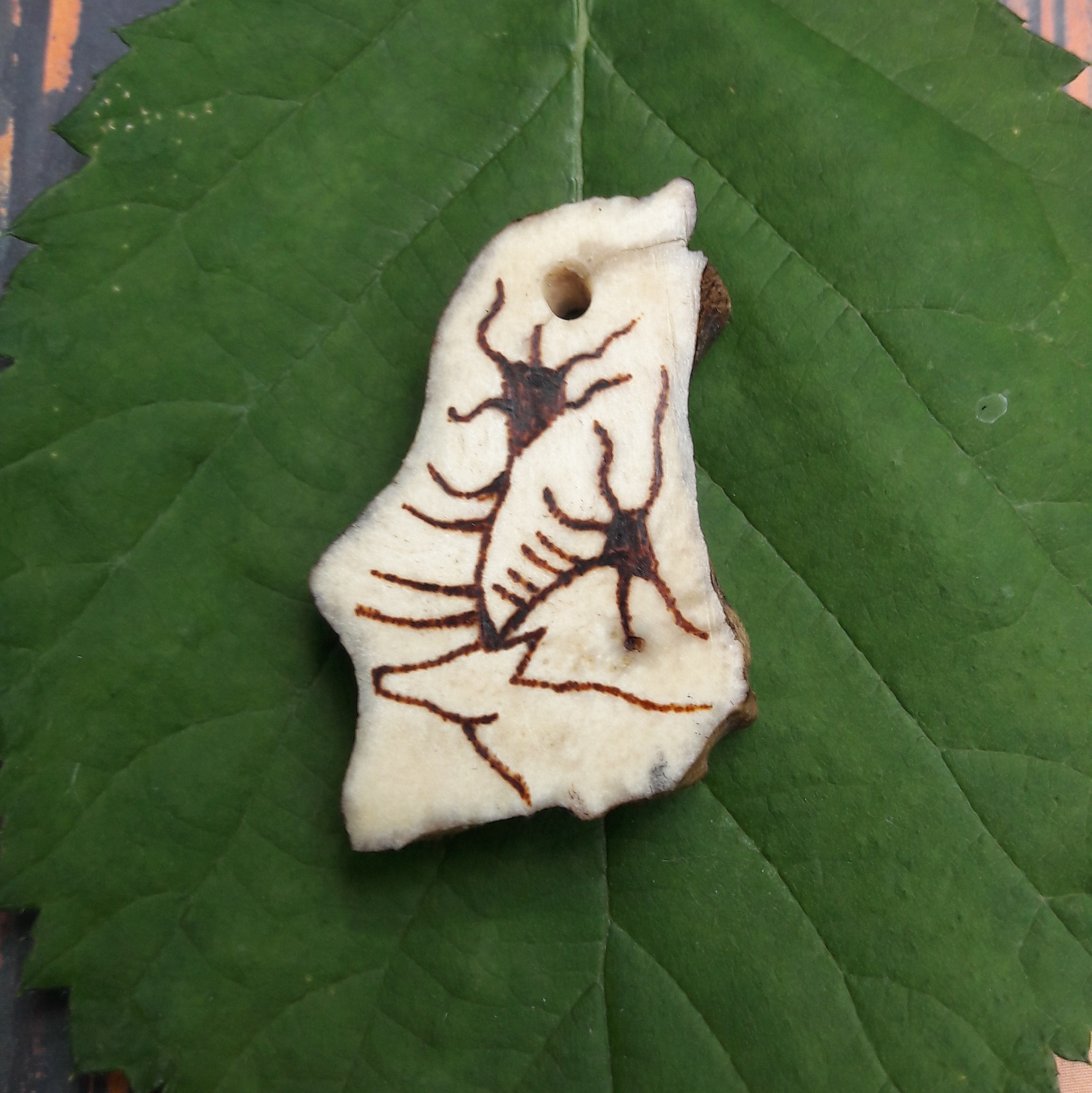 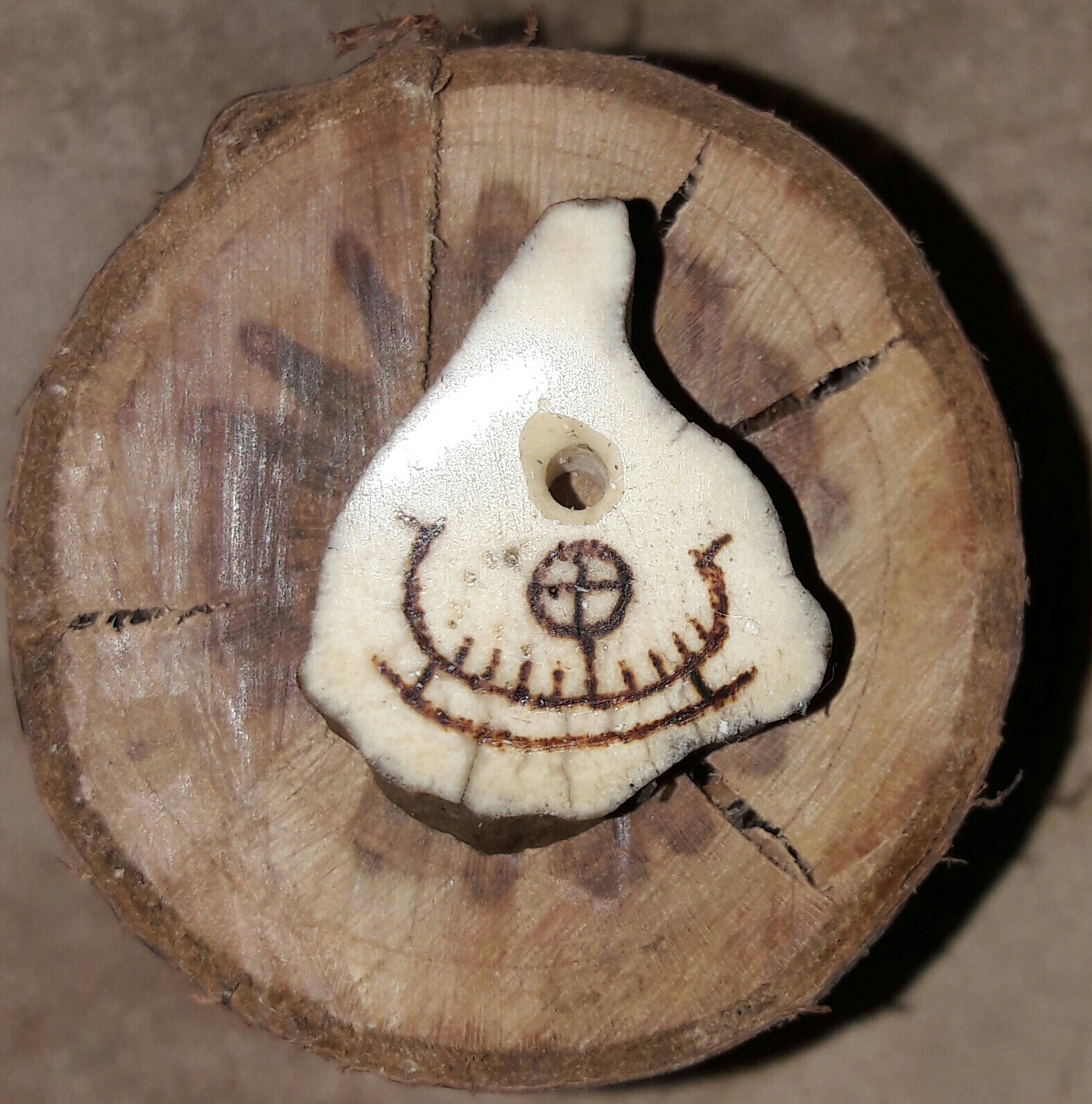 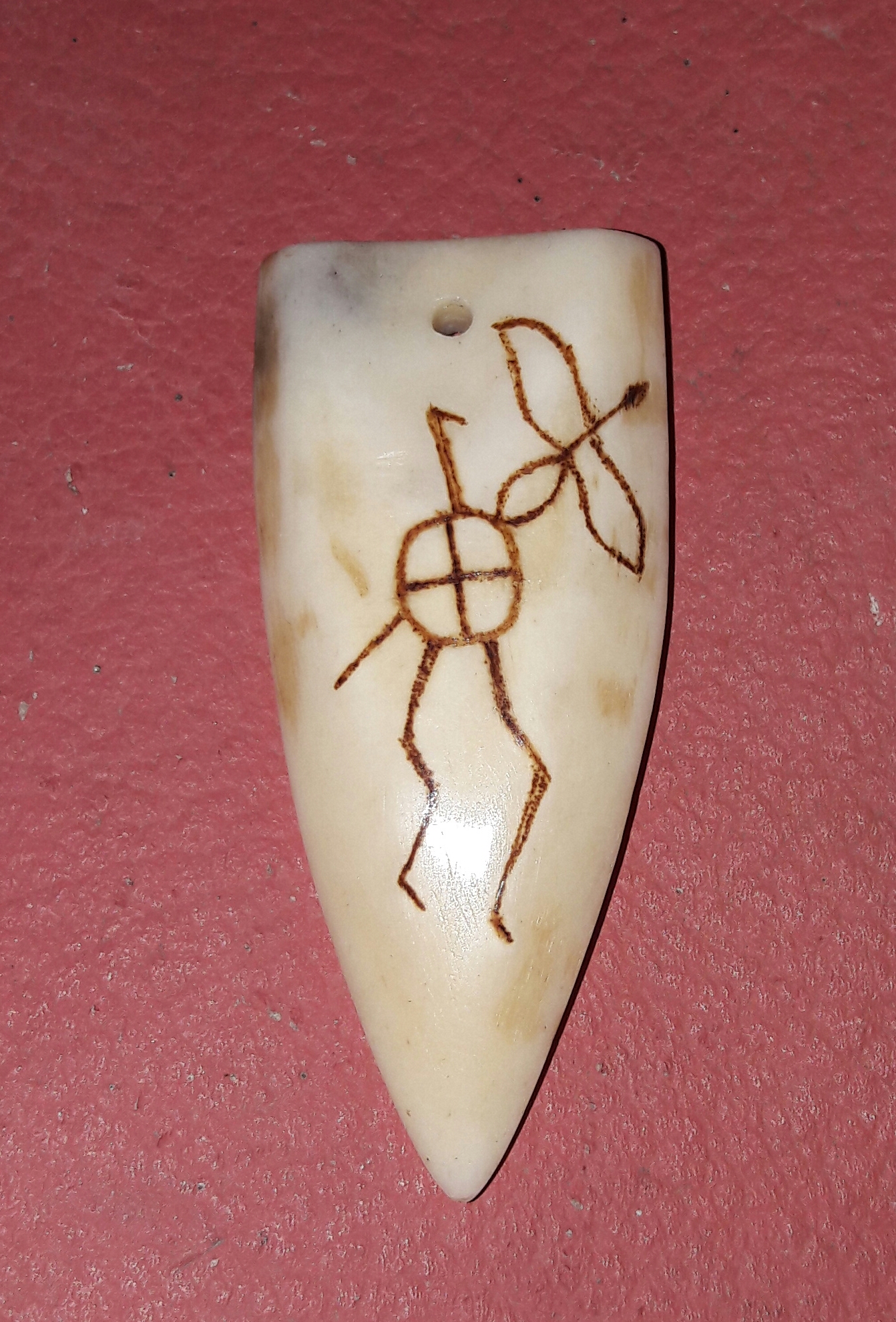 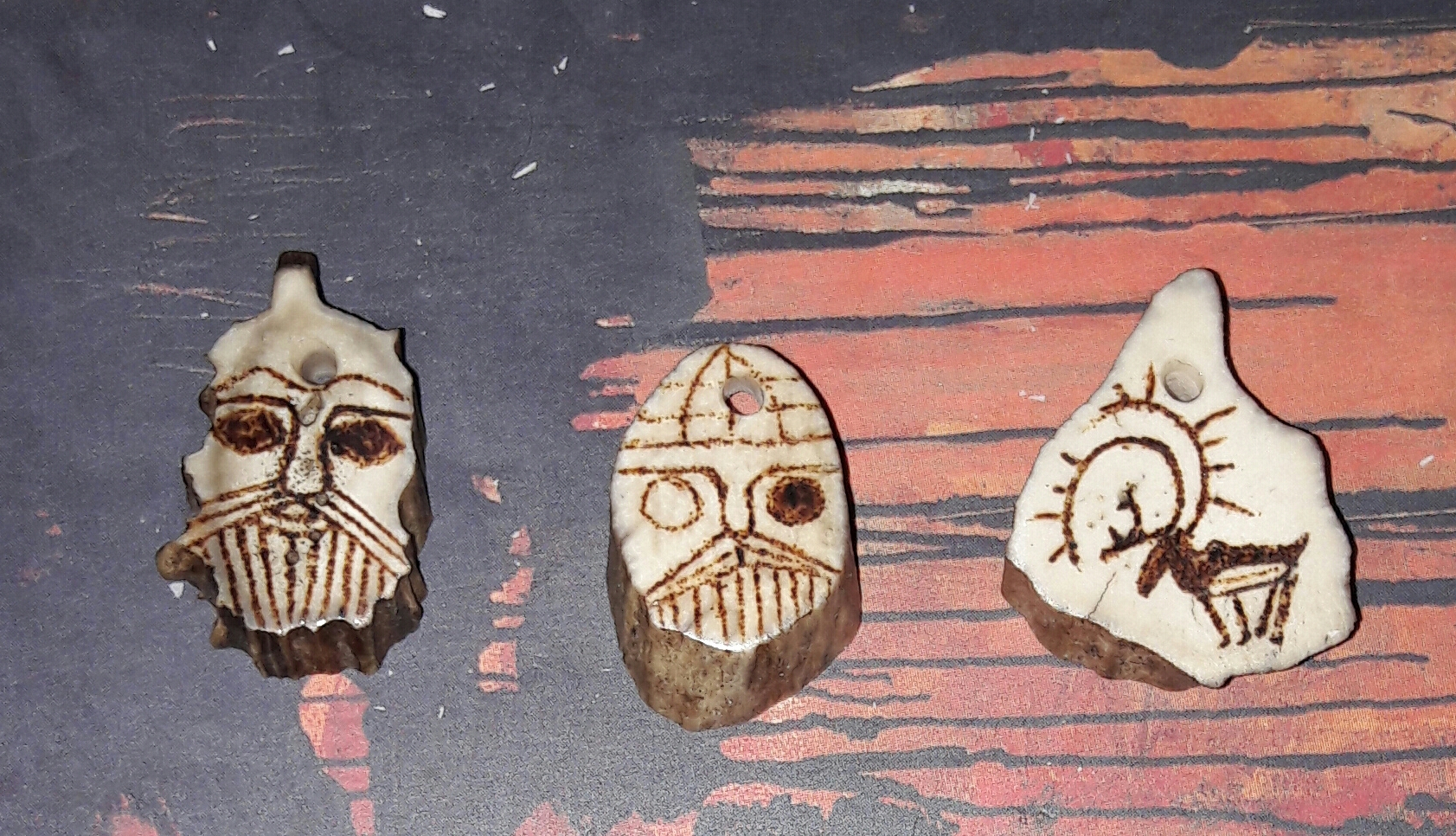 It's pretty addictive making art while burning stuff. Roe deer antler works real well and much of the above is on that stuff.. regular bone was a little more tricky especially old stuff i had had lying around for an age (yes i have old bones lying around).

I'd totally recommend the outlay on a cheap pyro pen - it's plenty for me at present and a great intro, but when you see what top artists make (often but not always with expensive kit) it's pretty mind blowing.

So i know there are some epic artists around here, and i implore those of you with pyrography kits to get busy and show some stuff

And yeah, photos are over actual size!

posted on Jul, 23 2017 @ 02:57 PM
link
a reply to: skalla
Beautiful! Those are amazing for a first effort.
My first efforts were on gourds, a much easier medium. You're right that it is addicting.

Ta! It's kinda easier on bone as it takes so long to make a mark, when i tried wood first i just go spots with heavy burns every where. They are epic for pendant making, will be good for making small items for stalls

I use a dust mask at the mo, i should look at upgrading as i'm doing increasingly more bone work

Just sat down for the night and wanted to comment on your work. The pic above holds my favorites out of this bunch. Doing bone burning must be a lot harder then soft wood. There is little to no room for error I would imagine. What do you do if you make a mistake? Is there any way to repair/correct it?

Always like it when you share your bone carving work. Thanks for doing so once again! All your pieces are very beautiful and unique.

posted on Jul, 23 2017 @ 06:00 PM
link
a reply to: skalla
I've always loved growing gourds and decided to try my hand at burning them in addition to painting them. Some designs are just awesome with simple lines. I draw most of my designs from native work found on the ceramics of the Mississippian people who lived in our area about 1000 years ago. (No issues with copyrights) But vessels with fall leaves on them are hugely popular as well---I've probably gotten more commissions for those than any other single design after a local doc bought one for his waiting room at a charity art auction.
I use the scraps from the vessel-making process to do jewelry; earrings and pendants. The site where I volunteer offers workshops for adults and kids to make their own designs. Of course, we offer only painting since woodburning would be a tad too much to supervise with kids. I make the blanks they use from scraps and collect yarn, cord, beads and such from thrift shops to keep down the costs.
It's a ton of fun to teach people about gourds and their many uses.

I guess it could work on woods, but you need sustained high heat to mark bone. Wood is fairly instant, on the bone it takes a while to even make a faint mark.

Thank you very much, i thought it was dead cool chilling to ats after pyrographing much of the day and then seeing your thread.

I honestly reckon bone/antler (same difference) is not harder than woods to work on. It just takes longer to prep and often a lot, lot longer to start a mark. That aint a bad thing though as the kind of mistakes like slipping and going "just over" or bodging a curve dont really happen as you have to take your time and its just so much bloody slower lol

I'll be trying some shading /tones on stuff next but i am not overly confident about it. Dots and points may work better.

It does help that this kind of primal themed stuff is fairly simple too, and a lot of the stuff above comes from cave paintings and scandinavian petroglyphs. The portrait quality stuff on wood is phenomenal, i'd be surprised to see that on bone but you never know, there are some amazing artists ploughing loneley furrows all over the place.

And long live them

I made some gourd containers some years back from various weird squash from a farm i used to work at. I never looked up the process but they were ok and lasted a couple or three years. I'm going to have to have another go at that some time!
So are you using gourd bits with wire and stones and stuff to make jewellery? Do you electroform or whetever it is? Sounds bloody interesting!

posted on Jul, 23 2017 @ 07:36 PM
link
a reply to: skalla
Nothing complicated---I just go through the scraps for pieces I can cut for blanks. I even had a line of jewelry that looked like pottery fragments that I made from broken gourds. Some can be cut with a hole saw, the easiest and quickest way. My woodburning unit also includes a knife-life tip that cuts easily through the thin-shelled gourds and I figured out that in doing designs that have cut-outs the scrap can be turned into other objects. For instance, I had a lady who wanted a gourd with a leaf cut-out motif to use with those little LED votive lights. When I had finished cutting out the leaf shapes I fashioned them into earrings and a pendant by adding a few lines for veins and a smudge of color. When she saw what I'd made from the scraps she wanted the jewelry as well.
My adopted son makes gourd drums out of those huge kettle gourds so he has lots of large scraps that easily can be turned into blanks. We even made a few picture "frames" out of the big ones from which he had cut the circle blanks. They were pretty popular at the workshops. The kids decorated them and then were able to print out pix when they got home and glue them into the holes. One sent us pix of his completed project. He had used photos made a the site the day of the workshop. I love creativity!

Pretty cool stuff, and I certainly dig the old-school style to your art (as in, ancient).

Do you sell this stuff, or just do it for fun?

All just started out as fun though, and making a range of quite different things keeps things keeps it that way too

I wish that I had the free time to delve into this stuff--I bought a wood-burning kit (cheap one) to decorate my Eskrima sticks, but still need to find the time to do that (I'm just using .75" oak dowels as my practice sticks, so it's just for fun). I'm relatively artistic, so I'll hopefully be able to take you up on your challenge sooner or later.

Thanks so much! I'm going to do a lot more of these and explore other similar themes in the decoration too.

I've been playing around with leather cord and threads and stuff today and now have them all fixed to attach to necklaces etc. They look nice and primitive too which is in keeping with things.

There are three more recent ones here as well.. two pyro'd with marks from the stones in and around the barrow of Newgrange in Ireland, and the lone one has the heraldry for Durin the Deathless, ancestor/first King of the Dwarves from Tolkien. 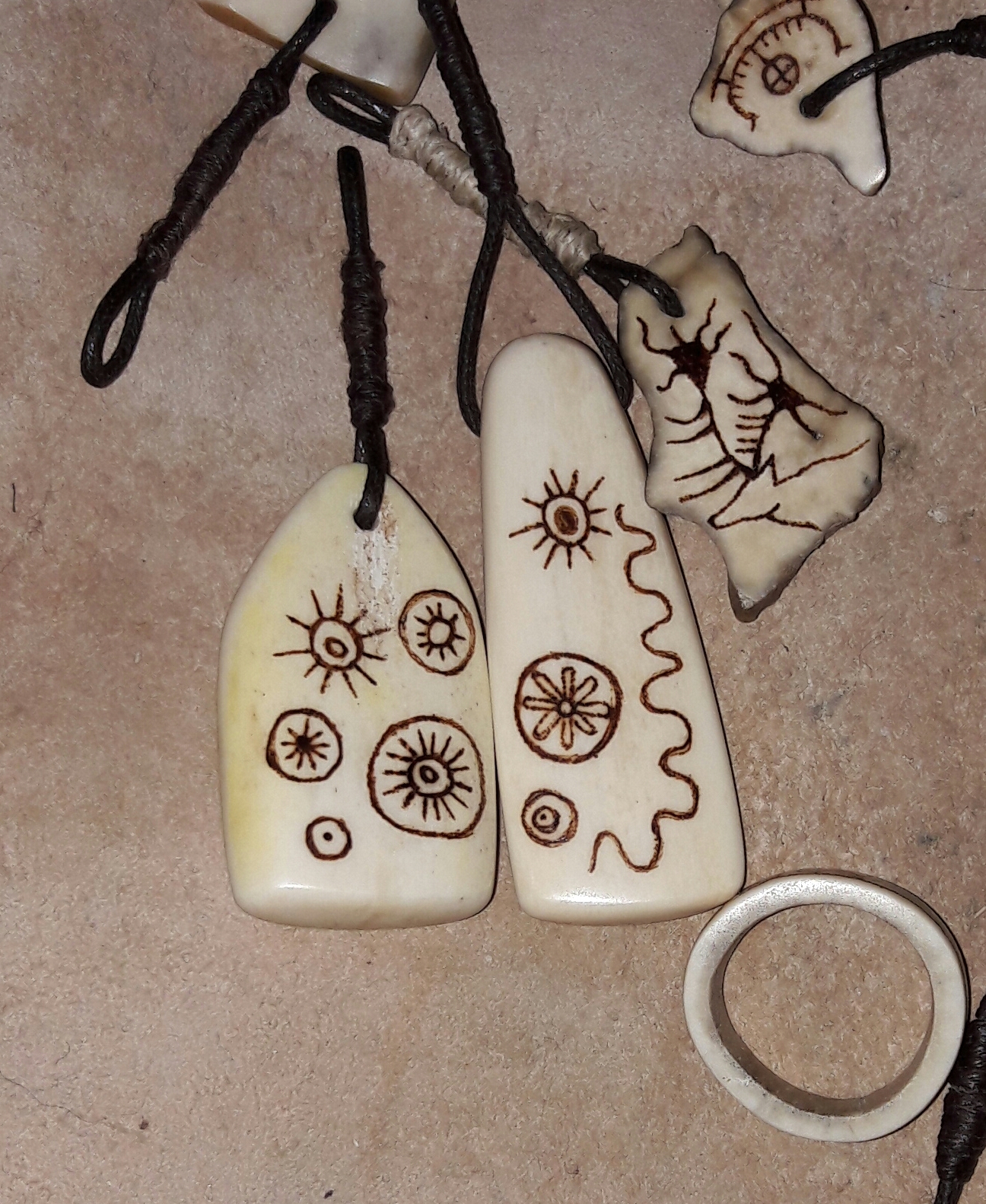 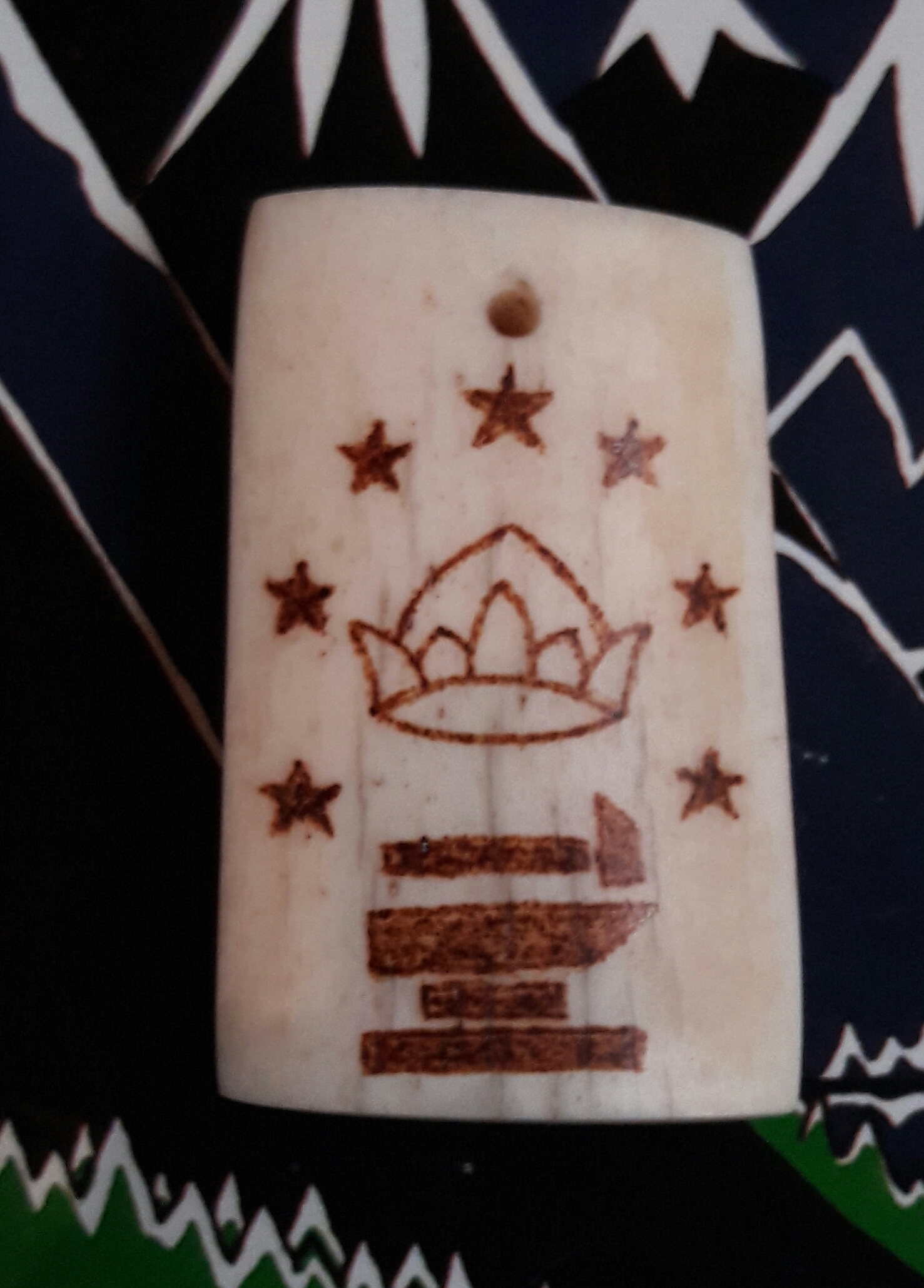 More Tolkien geekery is in the pipeline too

Cheers, it's best to have a nice chunk of time in which to do this for sure, it doesnt suit haste which is a nice quality in a pass time.

The primitive thing is what I like the most about them.
Leather thongs would be perfect!