posted on Jul, 21 2017 @ 01:26 PM
link
It appears that animal mutilations are not only restricted to cattle. Matter of fact, they're no longer restricted to land! It seems that these mutilations from an unknown source can now be found in the oceans.


Something odd is going on off the shores of South Africa. Several deceased great white sharks are turning up along a stretch of coastline with their livers quite precisely removed from their carcasses; two of them were also missing their hearts.

Now it appears they have struck again: a fourth great white has been found lacking its liver on the same stretch of coastline. Once again, the organ was removed with “surgical precision”.

SHARKS! Yes sir, now sharks are quite possibly on the alien menu. This gives a whole new meaning to "Thanks for all the fish"!


However, the mystery 'may' have been solved...? 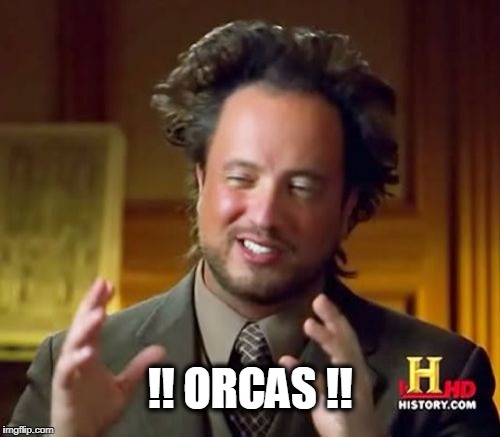 Incredibly, the culprits weren’t just identified by the type of wounds located on the victim – they were seen actively patrolling the scene of the crime before fleeing the area.

“The pair of orcas believed to be responsible were sighted offshore of Danger Point then again in Franskraal today,” the Facebook post reads. “Marine Dynamics cage diving boat tracked the pair.

Though, it's really hard to say. It doesn't seem to be a common MO of the Orca.

This murderous pattern began in early May, and the latest killing suggests that it’s likely to continue for some time. Although orcas are effective hunters, it’s somewhat unusual that they’re going after great whites, who are the unquestionable apex predators in these waters.

There are various hypotheses being banded about trying to explain why these orcas are eating select organs of the great white, rather than the whole carcass.

As we noted previously, the specificity of the organ harvesting isn’t too unusual – when hunting whales, orca sometimes kill their calves and only eat their tongues. Some organs provide a lot more energy than the rest of the flesh, so perhaps this type of feasting is a form of energy conservation.

Orcas would expend a lot of energy just killing a great white shark in the first place though, so this idea may be invalid.

In any case, their precise removal of these organs from a thrashing great white is as mysterious as it is unprecedented.

I wonder if we'll ever really know


I have to ask, are you speaking from experience, or just hearsay?

posted on Jul, 21 2017 @ 01:42 PM
link
damn, maybe these were sharks that the NAZI zombies had to ditch due to precision fire from the ground/orcas ???
Were any of them found with mounted weapons systems they could use while flying in the sky?? I am totally watching this movie now!

Are the cow mutilators interdimensional land orcas from the future or are they just plain alien land orcas?

Are you familiar with the term "rape"?

posted on Jul, 21 2017 @ 03:46 PM
link
This kind of strange animal behavior is not unknown. The majority that causes animals to go out of their food chain is either by health or human intervention.

The Tsavo Man-Eaters is really the only one I know of. Turns out it was because they had bad teeth. They probably don't have this problem. Livers and hearts are pretty tough.

If this is aliens like it was the cow or some strange mad scientist off the island of Africa doing only god know what. There could be plenty more animals with these inflictions. We know of cows and sharks because we keep a close eye on them. if aliens or scientist why do this? if aliens they have the ability to either jump dimensions or travel vast distances and they need to mutilate animals. It doesn't add up. Unless they are badly needed somewhere.

I believe some poor sucker buying a liver off the black market is about to have a very bad few days.


originally posted by: stosh64
a reply to: StallionDuck

OP... It's killer whales doing this. It's been known for years.
They hit the sharks hard and flip them upside down and put them in a coma like trance. Then they eat their liver, which gives the sharks their bouyancy.

posted on Jul, 21 2017 @ 04:24 PM
link
The location is interesting. I watched something a few weeks ago about a small pod of Orcas off the coast of California acting like this. Attacking sharks and removing the liver. Even showed underwater footage of one playing with it before eating and sharing the liver with other orca. If I recall correctly they discovered the behavior from investigating a video of how the one orca was killing the sharks. Makes me wonder if this is the same pod...

posted on Jul, 21 2017 @ 07:54 PM
link
I've read reports of deer found with their liver missing in areas where Sasquatch sightings were reported.
I think I may cook up some liver and onions tomorrow.

posted on Jul, 21 2017 @ 08:44 PM
link
Crows are known to peck out the livers of frogs and toads. They're pretty fast at it too, punching a clinical clean hole straight through the toad, pulling out the liver. Then when the critter goes into self defense mode, it explodes either due to inflating the lungs or a build up of toxins.

posted on Jul, 21 2017 @ 09:08 PM
link
It's been pointed out, not a new thing known with Orcas feeding behavior. It also does not dismiss the on land cattle, etc., mutilations.

posted on Jul, 21 2017 @ 09:16 PM
link
I only had to get as far into the story as reading the livers gone to know it was Killer Whales, they are the true apex predator, they do kill any sized shark they like and do like the liver..which is huge.
I am surprised to hear they are responsible for cattle mutilations

I'll have some peaks at danger point through my telescope, maybe I can get some pics

posted on Jul, 22 2017 @ 11:41 AM
link
When somone can show me how Orcas are capable of removing livers and hearts with surgical precision whilst the Great White Shark is thrashing around (a feature keen alien-avoiders have studiously avoided in this thread because it spoils their vacuous attempt to turn this issue into tired jokes debunking cattle mutilations), I shall join all you jokers. Until then, I will treat these replies with the scorn that they deserve. For starters, there is no proof that ANY Orcas were involved. This is mere speculation based upon a pair being spotted in the vicinity at the time. Secondly, selection by an Orca of specific organs, with the rest of the carcass being ignored, is highly unusual. If it were common behaviour among Orcas, this would be a non-story. But it is not. Hence the apparent anomaly. Thirdly, quite how an Orca could surgically remove a single organ without causing any other damage to the victim's body in the attempt to extract it is problematic and cannot be ignored by silly jokes and a thread whose title (with tongue in cheek) proclaims that this somehow solves the cattle mutilation phenomenon. The Great White Shark biologist who examined the carcasses said that he had never seen anything like this before:
www.iflscience.com...
Now, don't you jokers think that is just a tad strange? A predator suddenly and without any obvious reason radically changes its eating habits and becomes very choosy over which morsels it wants to eat! Obviously, the biologists are going to go with the Orca as the culprit because that is the only kind of explanation they knew their colleagues are going to accept. The problem with it, however, is that it is not a satisfactory explanation because it raises more problems than it answers:
1. how could an Orca remove neatly and with surgical precision both the liver and heart from a 4 metre Great White Shark without firstly, causing enough trauma to disable its struggles. Do you jokers really believe that all that was required were two quick nips in the right spots of one of the greatest predators in the ocean? If so, I have a bridge to sell you.
2. how was the Orca able to extract both organs without creating any sign of a huge bite mark in the carcass? How about adding the Chupacabra phenomenon to your list. You may as well do so because it is just as absurd. How does a large jaw make an incision small but deep enough to extract the vital organ but leave no other evidence of bite trauma or wounds?
I know why people like to joke about anomalous discoveries. It helps to avoid having to face the hard problem of providing satisfactory explanations. Just create the illusion of an explanation by joking about it as though that was really an adequate response and enough people will follow you. Well, some of us prefer explanations that stand up instead of explanations that amount to a joke. The one offered by the biologists who examined the carcasses does not stand up because it cannot account for the surgical quality of the removal of specific organs without accompanying wounds one would expect from an encounter between two large sea predators. All it provides is an unlikely culprit.