posted on Jul, 20 2017 @ 01:33 PM
link
I've been fascinated by dinosaurs since I was in diapers. Bits come along here and there that add to our knowledge. I read in the papaer today that the T Rex was incapable of running:

Fifty years ago, if you’d asked the dinosaur experts, they would have told you that Tyrannosaurus rex was a speed freak – a giant predator that could outrun racehorses. The paleontologists would have pointed to its three-metre hind limbs, leggy for even a big dinosaur, and described the creature as sprinting after prey at speeds of 40 mph (64 kph).

But a better understanding of physics kneecapped the swift T. rex concept. Scientists, rather than looking at the bones alone, began to gauge dinosaur locomotion via models of skeletons and muscles. The picture that came into focus was a slower beast: T. rex, although no less of a predator, was certainly less fleet of foot.

A new report, published Monday in the journal PeerJ, refined just how fast the dino could go. T. rex wasn’t much of a runner, the study authors say. In fact, it couldn’t run at all. Instead, the animal speed-walked.

Thanks to its wide stride, T. rex would reach about 12 mph (19 kph) at its quickest hustle.

Depending on stamina a person could have run from them. Sorry Mr Spielberg.

Another misconception is that these massive creatures lived at the same time. The dino age was over 100 million years. While the T Rex fed on Triceratops, others like Stegosaurus Brachiosaurs, etc were extinct 90 million years before the King. The older dinosaurs were from the Jurassic era. The later one from the Cretaceous period. Sorry again Steve.

It's nice to come across new info. Keep things fresh and interesting.... well, to me 50 years on.


Damn things always fascinated me too..


I read that the t rex is closer to our time than stegosaurus time. So much for the old movies I grew up watching.

YEarh but.. the article still say


Even if T. Rex couldn’t run, he could still speed walk his victims down. THOMAS HUTCHINSON; PROVINCIAL MUSEUM AND ARCHIVES

But then again.. I still wish humanity to make Jurassic Park.. and I still believe we will.. when our tech lets us

There are rumors of dinosaurs still roaming in remote parts of the world. If they are real and if we can find them, we don't need technology to build a Jurassic Park.

posted on Jul, 20 2017 @ 02:22 PM
link
it really depends, there were times were they said dinosaurs were very slow, very cold blooded, and needed a lot of heat to do anything. Then they said no, we are wrong, they could run at amazing speed (probably the era when Jurassic Park was done). The theory changes with his adepts thru times. But it makes sense that with today's computer we might be able to understand thru bio-mechanical models, how they could move and how fast, taking into consideration whether they were cold, warm or mix of both blooded.

Even tho the T-rex lived in the cretaceous, many type of shape like t-rex lived during the Jurassic. Allosaurs come to mind quickly, but i'm sure there is a bunch of others.

biggest Allosaurs were just as big as T-rex!

Read someplace that T-Rex was probably an ambush predator.

My thought is he may have been a scavenger...perfectly capable of hunting if need be, but it's easier to take someone else's lunch...kinda like bears today that will chase wolves away from their kills, or hyenas stealing a cheetahs kill. Just easier.

originally posted by: rickymouse
Here is some more info on T-rex

The slowest moving one recorded.

Even today i can picture Triceratops epic battles with T-Rex

originally posted by: Akragon
a reply to: intrepid

Even today i can picture Triceratops epic battles with T-Rex


Agreed. Those are some big horns. Also Ankylosaurus: 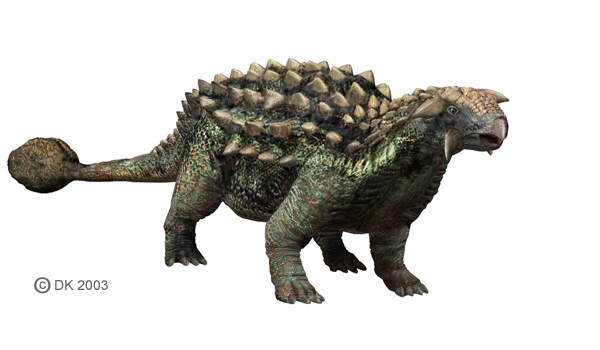 posted on Jul, 21 2017 @ 09:23 AM
link
at this point science has shown dinos were warm blooded .
and frankly with the FACT many dinos had feathers looks like birds did evolve from them .
really it boils down to 3 types of higher order land animals on earth reptilians ( cold blooded ) bird warm blooded in a odd way and mammals warm blooded .
Now the dinos were reptilians thing needs be be layed to rest .
As for mammals well the ice age critters could rival dinos any day and ( humans defiantly walked beside them )
a beaver teh size of a VW a sloth the size of a VW a wolf the size of a cow a bear well bigger then a grizzly .
and lets not forget the weird rhino types hairy elephants .
And lets not forget every ones favret Saber tooth .
THE ONLY animal other then man that could hunt and kill elephants . The baddest of the bad 3 foot teeth and 20 switch blade knifes . run over 35 hph jump god knows how far .
man with pointed sticks would not have stood a chance .
It was fire that kept us alive during thous times .

That's right just more conjecture really...
I see the T Rex as not a speed demon but as an epic Jumper...
It's short arms played a role and stayed out of the way in battle to keep from being bitten off by itself or it's potential prey or opponent...
What purpose did the arms serve?
Well those big chompers would get rather large bits of tissue and bone stuck in them and without those little tooth pick arms to clean their teeth they would have died...
edit on 6-8-2017 by 5StarOracle because: Word


interesting. Not sure birds had begun to clean reptiles teeth back then