Should America’s Tech Giants Be Broken Up?

posted on Jul, 20 2017 @ 09:07 AM
link
Some scary points from Jonathan Taplin. He contends that the alphabets are in need of some good old fashioned anti trust laws being applied.


Google is as close to a monopoly as the Bell telephone system was in 1956. Google gets about 77 percent of U.S. search advertising revenue. . Google and Facebook Inc. together control about 56 percent of the mobile ad market. Amazon takes about 70 percent of all e-book sales and 30 percent of all U.S. e-commerce. Taplin pegs Facebook’s share of mobile social media traffic, including the company’s WhatsApp, Messenger, and Instagram units, at 75 percent.


Some economists say the alphabets are behind the US economies decline in workers share of income, rise of inequity, and decrease in business start ups. The economists are bringing evidence, market concentration and free trade deals are used to push rivals out and leaving a winner take all super star. Cable-internet in my local area is a great example.


Economists have noticed these monopoly-size numbers and drawn even bigger conclusions: They see market concentration as the culprit behind some of the U.S. economy’s most persistent ailments—the decline of workers’ share of national income, the rise of inequality, the decrease in business startups, the dearth of job creation, and the fall in research and development spending.

Can Big Tech really be behind all that? Economists are starting to provide the evidence. David Autor, the MIT economics professor who famously showed the pernicious effects of free-trade deals on Midwestern communities, is one. A recent paper he co-wrote argues that prestigious technology brands, using the Internets global reach, are able to push out rivals and become winner-take-all “superstar” companies. They’re highly profitable, and their lucky employees generally earn higher salaries to boot.

While I agree that the monopoly status is evident, I thin this mess started int he mid 1970's. Decline in unions, trickle down, fiat currency and one sided free trade deals are at least as damaging as the alphabets.
If Trump can't get a conscientious about health care he will be hopelessly lost with some of wealthiest businesses in the Western US that will do anything to keep their corps on top.

You mention Google's ad revenue and it's prevalence as a search engine, and those are key to it's massive market share. But don't forget all of the companies and tech Google has gobbled up.

As of December 2016, Alphabet has acquired over 200 companies, with its largest acquisition being the purchase of Motorola Mobility, a mobile device manufacturing company, for $12.5 billion. Most of the firms acquired by Google are based in the United States, and, in turn, most of these are based in or around the San Francisco Bay Area. To date, Alphabet has divested itself of four[2] business units: Frommers, which was sold back to Arthur Frommer in April 2012;[3] SketchUp, which was sold to Trimble in April 2012;,[4] Boston Dynamics in early 2016 and Google Radio Automation, which was sold to WideOrbit in 2009.[5]

Take a look here to see the list at Wikipedia.

It's mind boggling. Oh, and they're also into genetically modified mosquitoes too.
edit on 20-7-2017 by jadedANDcynical because: (no reason given) 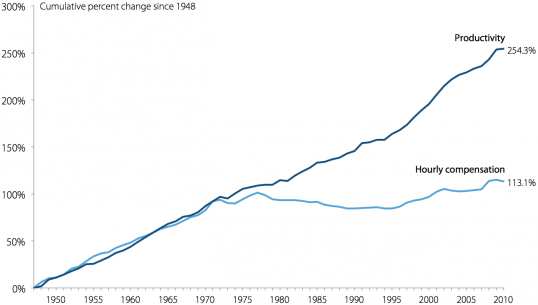 Even those negative things you mention as starting prior to the Tech giants have only been exasperated by their monopolies.

But it's not possible.

Now after globalization that playing field is much larger than we have influence over and hobaling US companies that need to commpeat globally may have a worse effect than the current situation for the American workers and consumers.

Perhaps if a global version of anti trust where to be implemented than it may have the desired effect.

posted on Jul, 20 2017 @ 09:22 AM
link
Is it even possible to break them up? All we control are american laws, these guys are global. Sanctions aside. Not only that their services are the backbone of the majority of business. They aren't just too big to break up, they are too big to fail. Its no wonder they are pushing so hard for universal basic income.

The problem is huge no doubt.
But it all started with free trade.
The product you are writing on was imported.
Wonder why?
Cheap foreign labor.
Allowed into the country by "free" trade.

We need to fix where it all started before fixing every problem that came after.

originally posted by: seasonal
a reply to: Bluntone22

That's a pretty big pivet. What social change happen so abruptly in the 60s to cause such a large divergence?

Woman entered the work force? The value of labor dropped as the pool of labor increased?

Advent of computers? The workers productivity increased, but only because they where supplied with better equipment not because they preformed more work?

The women's movement was a big part of the trend. People underestimate the effect.

Computers also helped swing our economy to service heavy instead of production. Labor is harder to put a value on when youre not making a tangible product.

originally posted by: seasonalShould America’s Tech Giants Be Broken Up?

No. If you'll recall at one time, we had companies like: Xerox, PanAm, Commodore Computers, Blackberry, Polaroid, Atari (which is trying to make a comeback), and many more.

While some of these companies are still limping along, the reality is that, at one point in their existences, they ruled their industries. Taking a snapshot of businesses at any given time and pointing to possible monopolies of industry does not a big picture create.

And they have rights.

Once you drop regulations against antitrust; the Corporations have taken over government, in fact are the government.

Corporate Oligarchy....capitalism gone all horrorshow! They don't need lobbyist anymore, just a simple phone call is all it takes.

There is much much more that goes into an anti trust suit than just brand recognition or popularity.
It has to do with predatory policy to the market place, "unfair" competition and The federal Trade commisoin and Bureau of Competition have many tools in their tool box to gauge when a corp is engaging in unfair practices.
edit on 20-7-2017 by seasonal because: (no reason given)

originally posted by: seasonal
a reply to: Bluntone22


I wonder how this chart compares to the work week timeline.

I think Jack Ma was being generous with the 30 year prediction.

This is one of the reason we are doomed as a species. If a universal income is to be the future, how is that huge huddle gong to be jumped when corps look at the evidence of short work weeks being better but still will not act?

It's not just the Tech giants.

Airlines, agriculture, the media, drug companies, cable providers, and health insurers are other examples. We can also add politics to the mix. The two main political parties don't give American's much choice and they get all the corporate funding and donations for their campaigns.

In the end the consumer it the big loser. So what's new?

I understand that, and I had written out a much longer comment, but shortened it up substantially at the last minute. I decided I didn't want to get into a detailed discussion about it--excuse my change of heart.

originally posted by: WeRpeons
In the end the consumer it the big loser. So what's new?


Such a "first-world problem" that it's almost a laughable complaint.

There are mini monopolies in large areas of the country that are under served by what seems to be a gentleman's agreement by things like cable/internet suppliers. They have carved up the country into territories that they stay into and let the prices rise and services fall.
edit on 20-7-2017 by seasonal because: (no reason given)