Eeegads! Does Trump Need a Dog Collar And Leash To Be Pulled Away From Twitter And Putin?

Time and time again, White House aides have implored Donald Trump to give up tweeting which is a really big part of Trump’s being his own worst enemy, this likewise coming from many concerned critics outside the White House.

Very recently, it was reported that Trump appeared to be under some magnetic spell and force that drew him right to Vladimir Putin at a G20 Summit dinner for an extended tête-à-tête while eschewing interaction with any other world leader... oops, big diplomatic faux paus AT BEST!! From what I heard, more than one eyebrow among the other world leaders was raised over this.

You have to wonder as I do: does The Donald play the Olivia Newton John role and sing, “I’m hopelessly devoted to you...” “you” being BFF Vladimir Putin? Oh, my! This would make him Putin’s [rhymes with “rich.”]

Rumor has it that Paul Manafort was dumped as Trump’s campaign manager because Trump had major problems with Manafort’s allegedly treating Trump like a baby.

If you ask me, Trump isn’t being treated enough like a baby.

Some parents, despite the scornful criticism elicited by such practices, have resorted to putting their offspring on leashes to control them. Well, maybe dog collars are not used, but I suppose that these parents use doggie-like harnesses to which the leashes are attached.

So, White House staff, if you want to yank The Donald away from a Twitter computer, then put him on a leash with a harness, ditto to control his love affair with BFF Putin.

I am sure that Trump’s personal criminal legal team has already considered such a restraint. I hear that those guys are beside themselves trying to get Trump to be compliant like a good little client.

I personally think that Trump ought to be allowed unbridled access to Twitter. I say: “let him continue to make a horse’s posterior of himself.” Remember, Trump, in doing so, will continue to be his own worst enemy. In this way, maybe the stomachs of Trumpists will turn and churn as mine has done for many months, and they will finally DUMP THE TRUMP!

FFS, go outside for a while.

I could rephrase your title to fit you and your obsession, but it would be a total waste of time.

He's getting dangerous now. Our country has no representation in these private meetings with the two most nuclear leaders in the world. Only Russian translators. It's whatever ever story Putin makes . Trump is a renowned liar now. Our nation has been compromised. This is real.

What else is happening


Trump is a renowned liar now.

you'll be saying trump university was a scam next

Because America voted this man in charge.
He is rough on many edges and aye he needs a better filter.I am a veteran. My orders came from my captain. I never met him but I followed him. And he followed his captain.

Now president Trump is that captain.I am not suggesting blindly following orders. But instead of writing a three page essay on how crappy you think he is. Why not clean the house you live in. The house will be here for a bit. You can keep crapping in the kitchen. Or you can start cleaning. That's the biggest problem. Everyone wants to be the chief no one wants to be an Indian...

The rabies or the rubles?

You must know The Donald's theme song: "Money, money, money, money... MONEY," as in "money mad."
edit on 19-7-2017 by theworldisnotenough because: Corrected punctuation.

It's only real in your mind. "Unknown sources" says otherwise.

Who do you think I am... Stephen Colbert?

Lagomorphe
+5 more
posted on Jul, 19 2017 @ 06:31 AM
link
Eeegads... you need a collar and leash to be pulled away from trolling out this site with your partisan Taurine faecal matter (like a couple of other members here too!)

Obama and Putin have private chat at G-20 summit

I suppose you'll agree we didn't have representation then either? I mean it was just those 2 and a translator, so.... 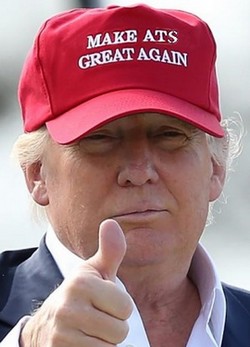 I dare you to do the same with Killary so that we can all have a good giggle at those who will whinge and whine...

a reply to: Prankster

edit on 19-7-2017 by Lagomorphe because: Crap editing and King prawns in garlic sauce with lashing of butter

OK, as long as you brought up "Make America Great, Again," [indirectly] I will bring up the very recent "Made in America" day.

This event yet again brought up the issue of The Donald's and Ivanka's products STILL being made overseas, and, yet again, spokespeople danced around the issue saying that "it's complicated," and that you just can't upend supply channels and bring production home... lame excuses.

What I think is the real problem is that the Trumps do not own the companies and products that bear their names. Most likely the true owners are nationals of the countries where the products are made. Maybe if we got to see The Donald's tax returns, as the Wall Street Journal is now calling for, then, maybe, just maybe, we'd get a better view into the Trump hoax.
edit on 19-7-2017 by theworldisnotenough because: Corrected misspelling.

posted on Jul, 19 2017 @ 06:51 AM
link
So he meets Putin once and suddenly they are BFF's? Trust me there would have been much more communication with Russia by now if they weren't being absolutely demonized by racists on the left who like to generalize an entire nation. They've made it such a volatile issue that any coordination with Russia is difficult without them throwing a hissy fit.
edit on 19/7/2017 by ChaoticOrder because: (no reason given)