They responded with a video that really "calls the shots".

Every name in the book...


The National Rifle Association lashed out at the Washington Post in an online video accusing the paper of championing the effort to take guns away from law-abiding Americans.

In the video message, Grant Stinchfield accused the paper of promoting a "radical agenda" and spreading lies about those who disagree.

He said the Post refuses to cover the "extremist beliefs of Carmen Perez [and] DeRay Mckesson" and the Democrats who refuse to condemn them.

"You people do more to damage our country with a keyboard than every NRA member combined has ever done with a firearm," Stinchfield declared. "Your paper's new slogan may read 'Democracy Dies in Darkness.' It should say 'Journalism Dies at The Washington Post.'"

posted on Jul, 18 2017 @ 08:16 PM
link
a reply to: xuenchen
Wow. Well said. And remember our gun rights were to protect us from a tyrannical government.

theantediluvian
+3 more
posted on Jul, 18 2017 @ 08:28 PM
link
The NRA is supposed to be a group dedicated to the defense of the 2nd Amendment. Instead, they're increasingly multi-spectrum right-wing propagandists with guns who have devolved to videos with Trump shills like Loesch attempting to smear half the country and convince conservatives that they need guns to protect themselves against a nonexistent threat posed by the other half of America.

Beating the drum of civil war is preserving the 2nd Amendment?

Call it a civil war all you want.
The left agenda and their loss is what literally started this vitriol towards the right.

The reason we have a 2nd amendment is to protect ourselves from a tyrannical threat, foreign or domestic.

You want to call destroying city blocks, businesses, schools, meetings a non-existent threat?
That's exactly what these people who are on the "left" do.
This "threat" exists. See all the youtube videos with bandana's covering their faces?
I wonder why they won't show their faces?

I don't remember as many times where the "right" had protested through speeches at every school, enough to burn city streets, their own neighborhoods, protests that vandalize in broad daylight, actively preaching about their "Antifa" ways...

You are quite the case.

I agree. I support all of our Constitutional rights, including the 2nd Amendment. But even George Bush resigned from them due to their extremism.


Freedom of Speech does not provide for silencing the people against tyranny. The NRA has every right to "fire" back
Youre not from around these parts , er ya ?
Know what NRA stands for ?
Ever read the Constitution ? In-depth ?

And if you Americans think the left doesn't have a agenda then you really need to get off the fluoride ...

How are they fighting against the 1st Amendment ?

Please site what ever it is you are advocating.


Basically anything . Choose your poison site.


Freedom of Speech does not provide for silencing the people against tyranny.

Please show me an example of the Washington Post doing what you have accused them of doing.

That slogan should also apply to Fox News, CNN, and most major news networks.
edit on 7/18/2017 by starwarsisreal because: (no reason given)

It is complicated, that is why this thread exists...to work it out.

I don't know. It doesn't really seem all that complicated at all actually.

Others may want to make it seem more complicated than it is but that's because the simple truth isn't useful until it's twisted and tweaked and spun into something other than what is most likely true.

That's how things are now everywhere.

Destroying city blocks is what "people on the Left do?"

Gee. I didn't destroy any city blocks. Have you shot any unarmed black people in a fit of racist rage recently? No? Too bad, somebody on the Right did so by your own reasoning, you're somehow associated with it because that's what "people on the Right do."

Right? You own that? That's you? That's what you're about? What you do? Well hell, I guess I better buy another gun to protect myself from all my conservative neighbors who might spontaneously erupt in violence.

See all the youtube videos with bandana's covering their faces?

That explains a lot about your f'd up worldview right there. You spend a lot of time watching YouTube videos featuring .00000000001% of the population and getting yourself worked up into a frothy propaganda-fueled frenzy? How many city blocks have been "destroyed" in 2017 by antifa protesters? How many antifa protestors have you personally seen with your own two eyes? None?

As far as bandanas covering faces. Here's your *apparent* peers doing the same: 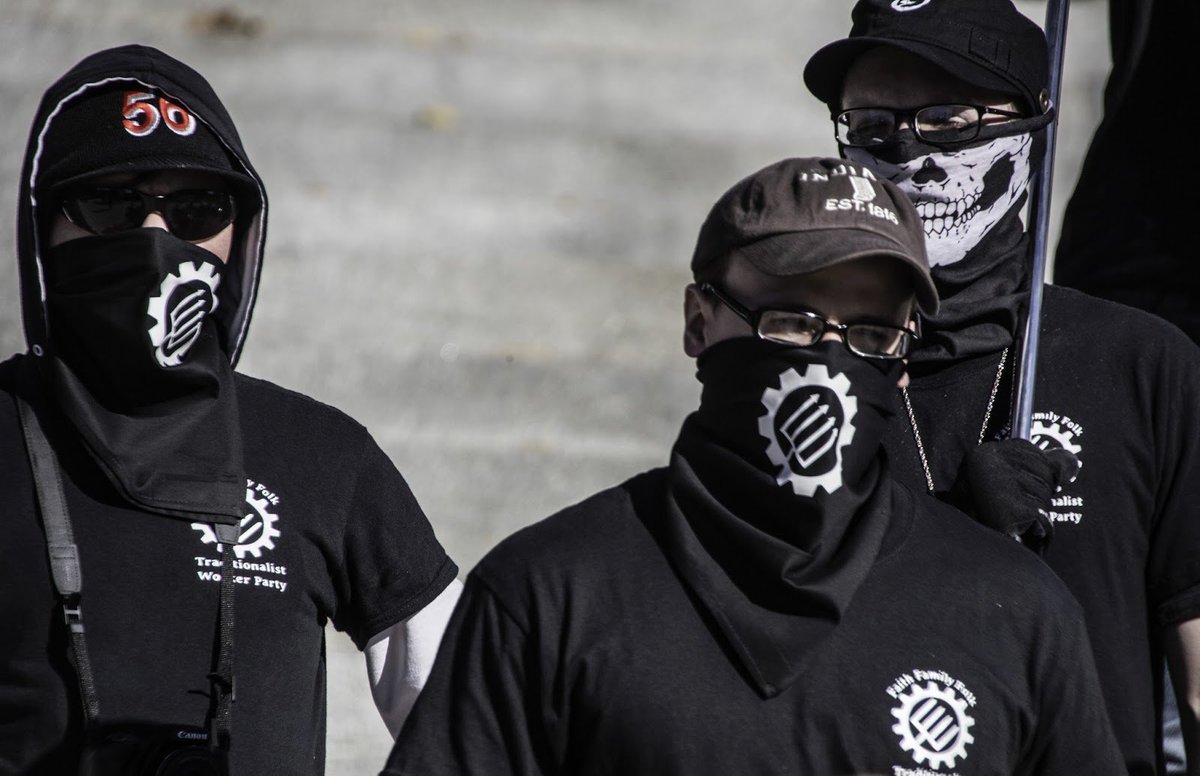 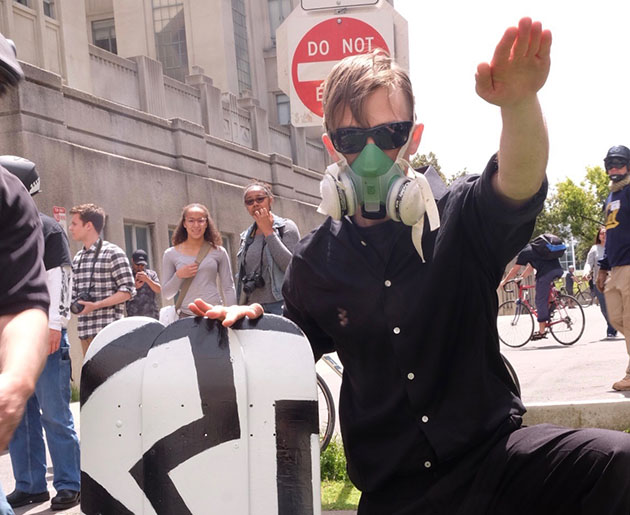 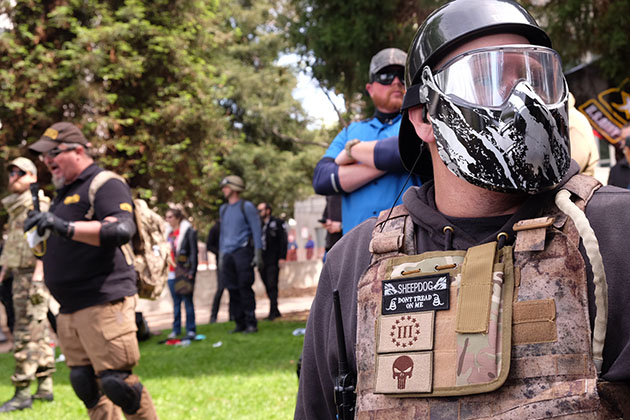 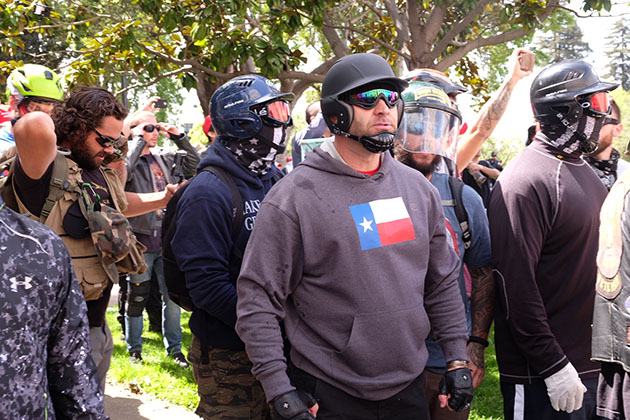 For all your blathering about what you saw on YouTube, you seem to be missing the part where antifa is battling in the streets with neo-Nazis, alt-right diet-Nazis ("Proud Boys" etc), III%ers and other right-wing extremists. For every "bike lock guy," there's an asshole like this guy who is on film clubbing a woman in the head with a pole in a brief respite from throwing Nazi salutes and defacing Jewish temples.

Your pontificating reflects an abysmal ignorance of what is actually going on here. You go on about the antifa but do you own the skinheads swinging their clubs on the other side of the line?

I can provide you with a steady stream of right-wingers doing absolutely horrible s# to offset your YouTube self-radicalization if you need me to do so?

Or... you could stop buying into the propaganda of the NRA and others and trying to smear those of us on the Left and in turn, I'll not return the favor.
edit on 2017-7-18 by theantediluvian because: (no reason given)


"That explains a lot about your f'd up worldview right there. You spend a lot of time watching YouTube videos featuring .00000000001% of the population and getting yourself worked up into a frothy propaganda-fueled frenzy?"


After all of your anti Trump rants before and after the election? Now that statement right there is just down right funny!