Let's get straight into the meat of this rant...
It's the Mandela Effect that's pissing me off...

Is it so hard to admit you have a faulty memory that you have to conjure up the notion you've been moved to an alternate Universe...
Is your pride really that inflated...

It's never unique things being discussed...
Like you came from a world like Pangaea... which would be cool..

In fact in all of this, the only one that seems to be a significant change is the fact that Nelson Mandela died...
The original...

It's just slowly degraded from there...
Only getting more mundane with each new Universe we are being told about.


Just stop it already...
Your memory is faulty.

How do you know about Pangaea?

Too funny. Perhaps if the same effort were put into studying how human memory works we wouldn't need to spend hours reviewing Google images for old corporate logos. Perhaps because I didn't remember Mandela dying until he actually did it never struck me.

On a side note, remember the guy who snuck into Mandela's memorial service saying he was a sign language interpreter when he was just waiving his hands around. That's pretty funny.

posted on Jul, 17 2017 @ 10:17 PM
link
I do not give a dam about Nelson Mandela or how things are spelled being dyslexic myself ,But Dolly did have braces and BIlly Graham died long ago saw them both on the television when I was young

He gets too much flack in my opinion...
There is a Universe out there where all that "sign language" made perfect sense.

posted on Jul, 17 2017 @ 10:18 PM
link
So ... the Baltimore Colts really are the Indianapolis Colts ... but Johnny Unitas was still their quarterback way back when ... and I'm just not understanding what Mandela had to do with any of this because he wasn't invested in pro-football?

Oh it's real, buddy. Open that third eye of yours and you'll see things are not so black and white. Everything is fluid.

In my timeline, you're a famous talking avocado.

In my timeline you complain a lot there also.

If its real, the architect of it has OCD and is a spelling/grammar nazi.

I wonder if the earth is flat in all of the different universes?

what irks me about the mandolin delusion :

they ckaim things have " changed " - without the logical consequences

yes - i am looking at the " alternate geography idiots "

originally posted by: knowledgehunter0986
a reply to: Hazardous1408 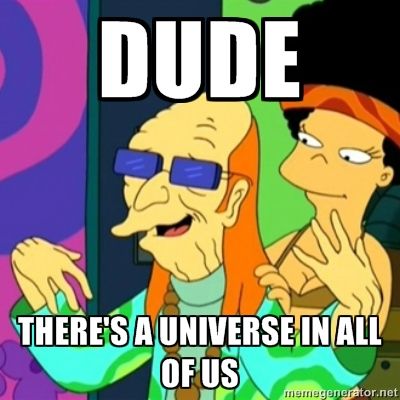 You know, there is probably a lot of truth to that, even literally.

Maybe it's like an infinite circle that starts with us and expands out for infinite back into us. You might have to be like the dude in the meme to get what I'm saying though.

ATS is a major cable news network and CNN is a conspiracy discussion board.

And on the board we have these crazy people that think the world is round and that comets are not electric!

How crazy is that?

Also, it's not called the Mandela Effect.....It's called the Elvis Effect, because some people thought he'd died back in 1977.

BTW - I just saw Trump is POTUS.....when did that happen? Everyone knows that Hilary won the election!

posted on Jul, 17 2017 @ 11:25 PM
link
Pretty washed up, it was some stuff I wrote about last football season talking with a friend.
Which then went onto a certain online radio station.... and apparently elsewhere.
You're a bit late and the conversation is so far gone you're right. Let it go.
en.m.wikipedia.org...
Its really crappy
edit on 17-7-2017 by SevinSix because: (no reason given)

originally posted by: TerminalVelocity
Everyone knows that Hilary won the election!


originally posted by: TerminalVelocity
Everyone knows that Hilary won the election!

omg i think we both got off on the same floor.

i also happen to agree with you about the fluidity.

let the op Anger!! and angry and haves the angers..