www.zerohedge.com...
Complete bunk, this is what MIT and several leading US universities called the GAST data produced by NASA, the NOAA and HADLEY. Seems like Trump made the right call.
edit on 16-7-2017 by seasonal because: (no reason given)

And millions of us before Trump. Now dont get me wrong the human race of late have treated their home terribly, particularly the rivers, oceans and lakes...but this recent climate bs is just that...bs and obviously part of a bigger agenda...ie UN agenda 21/30.
edit on 16-7-2017 by BlueJacket because: (no reason given)

The whole climate change issue is certainly something to research and evaluate. However, considering the natural process of the Earth and how long man has been here, I seriously doubt the doom and gloom of Global Warming.

Because, not only am I smarter than career military generals, I know Bigly more than all the PhDs at MIT

Anything of relevance to add?

posted on Jul, 16 2017 @ 07:55 PM
link
Global Warming is bull#. They are not even able to tell us for what and where the money is being used for. This whole thing is basically just a bottomless pit where they shove the money in and poof it's gone. It doesn't help their muh earth case that the paris accord reads like a SJW manifesto either. Seriously did any of these idiots who voted for it even read the damn thing. This is nothing but a scam.
edit on 16-7-2017 by Perfectenemy because: (no reason given)


I think this applies... 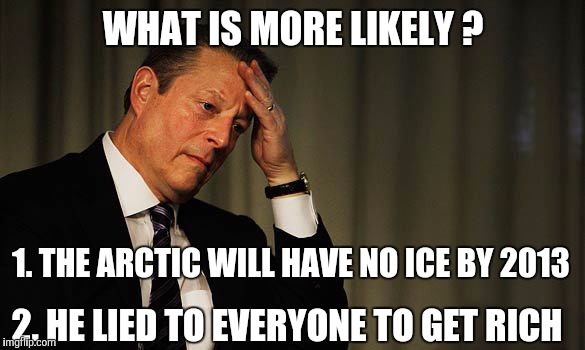 Jumps up and down with my hand up.

I think its number 2.

posted on Jul, 16 2017 @ 08:09 PM
link
The thing that really sealed the deal for me that this is all a hoax is the simple fact that scientists still can't come to a consensus. If this bull# were real they would all just come out and say it. Most of the science is also shrouded in mystery or inconsistent. Huge red flag imo.
edit on 16-7-2017 by Perfectenemy because: (no reason given)

I was hoping you'd spot that.

Good point, the Theory of evolution is just that, a Theory. It is a law once it can be verified and proved.

It would be nice if it was referred to as the Climate Change Theory, because that is what it is.

posted on Jul, 16 2017 @ 08:30 PM
link
Instead of REAL scientists that are schooled in REAL science, the climatologists are just political scientists .
Know who the first UN IPCC Chairman was?
Read the Wiki on him . Interesting .

Yes, the science and the people who are supposed to be scientists are lacking.

I find it amazing people get sucked into this when a simple and accurate weather report is impossible to get.

and so does trumps Sec. of Defense...

If money's involved and climate change is wrapped in billions of research grants and corporate influence.

What's the difference between Gore profiting off CC and Trump selling bogus college degrees and ugly clothes made in China.

Well both your examples are lies, true.


But you can see the results are different and the scope is different.

And global warming is as close to free market capitalism as the US medical system is.