it was bound to come but they could have waited to a less turbulant time lol to cast a girl.

it is hilarious to see people saying they will quit the show.

she is just the face of the Doctor Who for the next few years. story, script, action and drama wise she does not have much to do creatively. so the show will be good or bad based upon the scripts, not whether the Doctor is a guy or girl.

that being said. the Doctor is like thousands and thousands of years old, and up till now, a guy. so he is technically a cranky old man. no way he should wear a dress or a skirt.

the reveal was awesome, because they shot a 1 minute promo, so we got to see the new Doctor in action, well, just strolling lol! 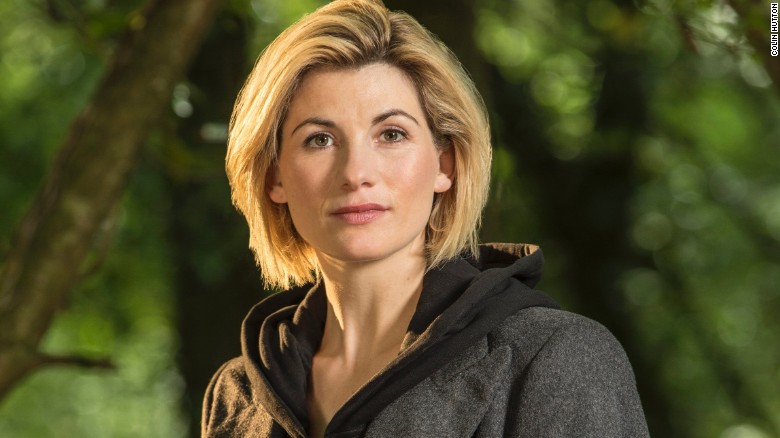 And let's guess... either the first or second episode will feature the Daleks, and companions yelling "Doctor help me!".

posted on Jul, 16 2017 @ 01:59 PM
link
Who cares shall we say the lumps and bumps are just so long as the stories are good, don't care male/female/whatever ethnic origins and all that jazz just give me a good bit of entertainment and i'm happy.

posted on Jul, 16 2017 @ 02:53 PM
link
I have a soft spot for british women so yeah i'm definitely game. Now please throw Matt Lucas in the mix as well and a more mature story and of course more alien planets and destinations. Screw earth.

originally posted by: eriktheawful
Guess who wrote for the TV show Broadchurch?


Yeah, do you think she was cast because they discovered that someone on Broadchurch was not related to Dr Who yet and had to right that wrong?

(I swear, it seems every TV production in the UK is massively connected to Dr Who!)

Broadchurch is created by Dr Who Writer (and Torchwood showrunner) Chris Chibnall, it is directed by Dr Who writer and directors James Strong and Euros Lyn, is produced by Torchwood producer Richard Stokes, and stars Dr Who actors David Tennant and Olivia Colman .. and now, with Jodie Whittaker, it can add another Doctor to the list.

You know....I've often wondered if the BBC has a very small pool of actors (I say it in jest my cousins across the pond, please don't burn the White House down again).

I first wondered this after watching "Shaun Of The Dead" when I saw Martin Freeman in it.

When I watched Death In Paradise......I saw Danny John-Jules and went: "Hey! It's Cat from Red Dwarf!.....only with a islander accent now....

Actually what I really think is people's names get known and writers/directors/producers decide that they want someone for a part because they can see them playing those parts.

posted on Jul, 16 2017 @ 05:00 PM
link
A generation of little boys have gotten to grow up watching Doctor Who imagining being the Doctor.

Little girls got to grow up imagining being a companion.

And now a generation of little girls can enjoy growing up imagining they too can be the Doctor.

Which is just brilliant. After 12 white men, it's more than past time for it to be a woman.


I really don't see how this is pandering to the left-wing though?

posted on Jul, 16 2017 @ 06:10 PM
link
This is great news and it's not something new. Heck it has been brought up for years and it just never came to light. While of course some people will get mad, but heck people get mad just to get mad.

Guess what life wont end because the doctor is now a female. Guess what will happen new story lines a change of pace and maybe just maybe a good run.

I'll just stick to rewatching the new series with the first 3 doctors.

I'm sure they have a storyline how the doctor is now apparently able to change sexes, but it really just destroys any small sense of reality there was (highly ironic given the complete lack or realism in such a show).

I am anticipating darker, gutsier stories with the new writing team (like in Torchwood).

I hope that they don't spend ages on feminizing the Doctor, but rather her character strengths are revealed by story development rather than being the primary story. I think that the alienness of the Doctor should be underlined by the transformation, the "I'm from a different part of England" characters are a bit narrow.

I'm gonna be honest here and no doubt be attacked for it but I DO have an issue with the Doctor being a woman. Now hang on hear me out: 1 - The Doctor is (Was) and always has been a man, it's just a fact. The show never mentioned the Doctor being able to change gender until what the Capaldi era just around the same time when the whole SJW stuff kicked up and it became okay or encouraged even to hate men and in most cases white men. 2 - The Time LORDS have always had two genders, Time Lords and Time Ladies, it's just part of the show lore and again when you change it for no reason other than to appease a certain group of people it kind of pokes your loyal fan base in the eye.

Finally and this I've not seen mentioned on here so here it is: What happens when SHE goes back in time on earth. If we're honest say thirty years ago women were treated like second class citizens. Think about it for a second, we have an episode where she goes back in time, it's a military situation and she steps up "I'll handle this" what d'you think the response will be from the soldier or general or whoever is in power? It's more than likely or at least if they want to be roughly historical she'd be knocked back or at the least told to get lost. So what are they gonna do about that? That's the hard part for me, that is why I just can't understand how it's going to work.


(P.S - I think the best time to have had a woman Doctor would've been when Matt left and the Time Lords gave The Doctor 13 new regenerations, he couldn't become her and mentioned how the new cycles had screwed up the gender)

posted on Jul, 16 2017 @ 08:03 PM
link
I was hoping for Miranda Hart or Richard Ayode.
I don't know who Jodie Whittaker is other than from Attack the Block, never seen Broadchurch.
But, with a new writer, maybe it won't matter who they cast.

Do you not remember the Time Lord General regenerating inyo a female?
I mean, it was under Capoldi as you said, but the "lore" is only determined by what is written by the show writers. So, honestly, other than Missy's statement about being a 'Time Lady'(which she wasn't before), there's really not much precedence in the reboot series to confirm your opinion.

In fact, I say the Master coming back as Missy contradicts your statement.

But, that too, is just my opinion. It is a fictional as how after all.