(The Left) You said nothing...

Wow, a .gif from a terrible movie.

I'd give you a carrot if I had one.

originally posted by: silo13
a reply to: silo13

43. Obama called himself a Christian (liar) but was pro-abortion.

Please, go ahead and quote some scripture that deals specifically with aborting a baby.

originally posted by: growler
a reply to: silo13

the news media pretty much covered all these things in britain, blindly cherry picked a couple and google shows american news covered them too.

you basically found someone who obviously doesn't watch or pay any attention.
you may have found the dumbest person in america, well done.


Ewwww did your little toes get stepped on, lol.

Obviously to me this person paid better attention than most and has the balls to stand up for what they believe in.

By the way America is speeld with a CAP ‘A’.

Yea you're right, the conservitives leaked the story to CNN and made them talk about it the entire day. 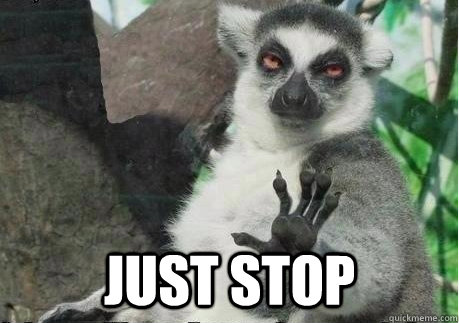 A how about Thou shalt not kill?

I have many more if you'd like but really it's for another thread - I don't want to throw this one off.

Awwww he has cute little hands, just like Trump!

I chaged the title per your request.

In 2 Terms, Barack Obama Had Fewer Scandals Than Donald Trump Has Had In The Last 2 Weeks
This is a major departure from the presidencies of George W. Bush, Clinton, Reagan and Nixon.
01/13/2017

While there were some minor scandals and resignations during Obama’s eight years in office, wrongdoing never fully occupied his presidency. None of it even directly touched the White House. There were no grand juries investigating his aides. There were no impeachments. There were neither convictions of White House staffers, nor pardons to protect government officials.

This was a significant departure from the previous four two-term presidents. George W. Bush’s second term featured convictions related to the Jack Abramoff lobbying scandal, in which more than a dozen lobbyists and government officials went to jail for corruption. There were also convictions related to the politically motivated purge of U.S. attorneys and the retaliatory leak of CIA agent Valerie Plame’s identity.

That doesn't speak about abortion.

A parasitic collection of cells that doesn't have conscious awareness, and can't survive outside of its host isn't really "alive".

Something has to be "alive" to be killed.


I'm still trying to process this new found boldness and badassery from you. Usually thats not a can of worms you'd want to open with me, but I genuinely feel for you, plus you've been on the recieving end of the stick more times than I can remember or you can even count up to, so instead I'll cheers you to that.

originally posted by: thesaneone
a reply to: Kettu

originally posted by: Outlier13
a reply to: olaru12

what difference does it make!!! Assume what ever you want. This thread isn't about me. Stay on topic.


WTF...now you're one of my stalkers. How many times do I need to say it? I'm a straight male.

I'm no member of the Democrat party (or any party for that matter). In fact, I can't even define my political views - left sometimes,right sometimes, centrist sometimes...all depends.

That being said, I think you are confusing the liberal MSM with everyday democrats/liberals.

originally posted by: olaru12
a reply to: MOMof3

Pretty much, notice how it's a nearly non-stop Trump rally on ATS?

They're really hiring a (*&^ load of new trolls in those factories over in St. Peterburg, Russia -- aren't they?

You can tell exactly how guilty Trump is at any given time by how desperate his cult following reacts. The worse things look, the more fevered the projection and deflection becomes. It's quite transparent.

I'm thinking about opening up a new ice cream shop called "Two Scoops" with our signature flavor being "Trump's Boots".

I mean, it seems a lot of people like to lick the boots of the man in the Oval Office...

Since you found the source written about the media and not regular Dems: I will add to my list:

23. You said nothing when Janet Reno, under Bill Clinton, used a tank to kill the Branch Davidians.
Yes, I wrote to my congressman, he set up a town hall meeting in response. A connected friend in Texas forwarded my letter to the Governor of Texas. She removed the Texas state flag from the flag pole, flying U.S. flag and ATF memorial flag.

27. You said nothing about states’ rights until Trump’s executive orders on immigration.
Yes, I started talking states rights as soon as GW Bush campaign started going to Federal Courts to stop the State of Florida from abiding by State election law.

34. You said nothing when the national debt doubled under Obama.
I'm reasonably certain that I did.

41. You said nothing when Obama killed four Americans overseas in counter-terrorism operations without a judicial process.
Yes, I did.

When every other thread is about Trump is Literally Hitler, he's a Russian spy TRAITOR, and so on, dont you think given a perpetual barrage of such typically fallacious and even fabricated hysteria, that all manner of people whom stand for truth and sanity would stand up against such malarkey especially given the narrative is being used to push a seditious civil war?


originally posted by: thesaneone
a reply to: Kettu


Funny, I always thought you were a female.