originally posted by: Kali74
a reply to: LesMisanthrope 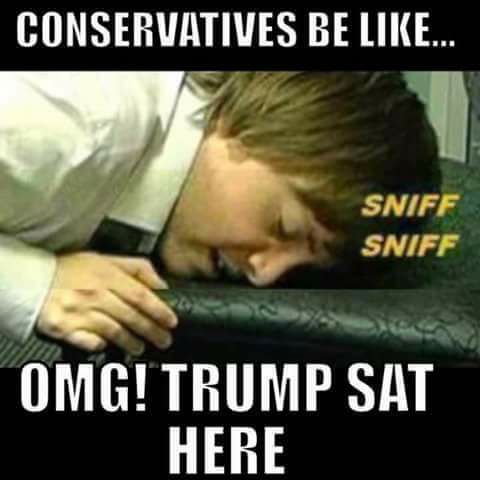 *I apologize for not bothering to change Conservative to Trump supporter. I don't mean to insult any Conservatives by assuming they support Trump.


I laughed so hard at this meme that I had to go change my snobby snowflake panties.

Thank you for the bladder test, Kali !

originally posted by: Grimpachi
Body shaming was part of Trumps campaign especially against women. So Trump is a snob?? Of course he is, his supporters think it's great it makes him real and they relate.

Dish out the same medicine to him or his supporters and they go all snowflake.

Another lefty who doesn't get it and can't read.

I don't care about body shaming. Do it if you like. But to take the platform of body shaming is horrible and people shouldn't do it, then to turn around and do it yourself is hypocrisy at its finest.

Otherwise known as the left.

I've quite lost track. I know what the title said, but that's not what the thread is about--not anymore...

Why is it that many wonder about the state of politics, again??? I would think it obvious, using this very thread as an example.

Let me explain it then.

That isn't his skin color it is his fake tan. Artifical coloring. Spray on.


originally posted by: Shamrock6
a reply to: burdman30ott6

Can you even imagine a world in which people just ran around grabbing gentiles all willy-nilly?!?

Run for the hills! The Goys are coming!


Wait I thought everybody was equal? What page did that change on?

When will you all understand you are all equal but I'm better then you all, I see you all equally worse off than me.
So does the OP lol.

I've been saying it for awhile now.

The left needs to drop the moral facade and take a hard look into the mirror.


But they won't... because their close proximity and infection with the hysterical meme virus completely escapes them, and they ALREADY self perceive themselves as being superior to anyone on the right, or folks who do all the working, living and dying in the United States.

To be fair... personal bias is a universal human trait. In the case of the left leaning Trump haters... they are completely self inoculated against recognition of their own bias... and the Weapons Grade Irony their ilk have been swimming around in.

It was supposed to be about the idea that the negative views of Trump are mostly because of his personality, not results and policy, as the poll showed. Adding on top of this the ridicule and bullying of his speech, mannerisms, body, lifestyle and so on, snobbery becomes the most apt description of this type of behaviour.

Perhaps. If you didn't like him because of superficial factors, and not because of results or policies, I suppose the title fits.

No I wouldn't say you were equal in any shape or form.

I don't really know if Bills character is at the core
of the repulsive feelings he elicits, I suspect it is.
I'll never understand the women who thought
he was attractive, even the younger him.

Well, now I have lost my appetite for dinner'lol.


Cool, I just got finished watching this and saw this thread.
I don't know if anyone posted this, sorry if it's been.


Published on Jul 7, 2017 Jennifer Sclafani, a linguist at Georgetown University, says President Trump is a “unique” politician because he doesn’t speak like one. Subscribe to The Washington Post on YouTube: http://(link tracking not allowed)/2qiJ4dy

Wait I thought everybody was equal? What page did that change on?

I thought you said you thought us all equal.
Your all over the place man get a grip.

posted on Jul, 14 2017 @ 08:20 PM
link
According to the Op, many people are being a bit of a snobs, as they do not like the president, due to his vulgar nature and not his policies. However, that is a big of a broad spectrum and a stretch as this is what I have observed and why I do not like the man:

I have watched when Trump first announced his intention to run for President of the United States of America. I recoiled in abject horror and shock, from what was coming out of his mouth, the things he stated and at first thought it to be a joke. Then as I continued to watch, I thought that the man is pulling a Patton, to get the one thing that is the most costly, media attention. And did pay attention to the RNC and listened. I payed attention to what all of the candidates were saying and some of the events that they were attending.

And after winning the nomination, was both shocked and at the same time seeing that he did not change his tone, but kept up with his mannerism, and shock value to continue to get media coverage of him.

And when you look at the lies that the man stated, where if you look at the video, the words are coming out of his mouth, yet he misspeaks and some of the things that he was saying was outright scary and terrifying to think about, let alone to listen to. And it spanned the areas that should never be included in or talked about or even thought of as policy in the United States, where it violates everything that the country stands for, both in law and idea, and things that many of grandparents and people of that generation fought against.

The man is not fit to be president, he uses the office of the President to enrich himself and his family. He is beholden to foreign creditors, and there is the cloud of suspicion that he may have colluded with Russia, and now the question that is starting to rise up is he working or taking orders from Putin, to direct US policy, that sets back our security. And he insults our allies.

I do not like him at all, he lies, is a bully, and his policies I do not believe will do well for the country, but only seek to benefit his family and other people that he goes with in the business world.


Killary and Obozo are calling, they want in on the pity party.

Politicians in general get too much flak.

Meanwhile, the real powers operate behind the scenes.


And insulting 2.5 billion people on purpose.