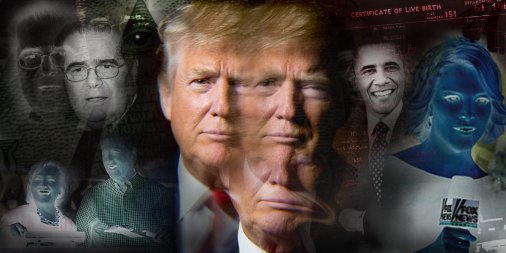 The PUZZLE is begining to fall into PLACE. Each day as MORE details are uncovered a clear TIMELINE of events is beginingto take SHAPE. Le'ts start chronologically, shall we?

In April of 2016, Sessions attended a VIP reception at a hotel in Washington, D.C., with President Donald Trump and roughly two dozen guests, including four ambassadors. One of them was Russian Ambassador Sergey Kislyak. The cocktail meet-and-greet took place in a private room at the Mayflower Hotel near the White House. Shortly thereafter, Trump delivered a foreign policy speech in the hotel’s ballroom, where he called for improved U.S.-Russia relations. Kislyak was seated in the front row.

And from PICTURES we can see they were indeed there TOGETHER: 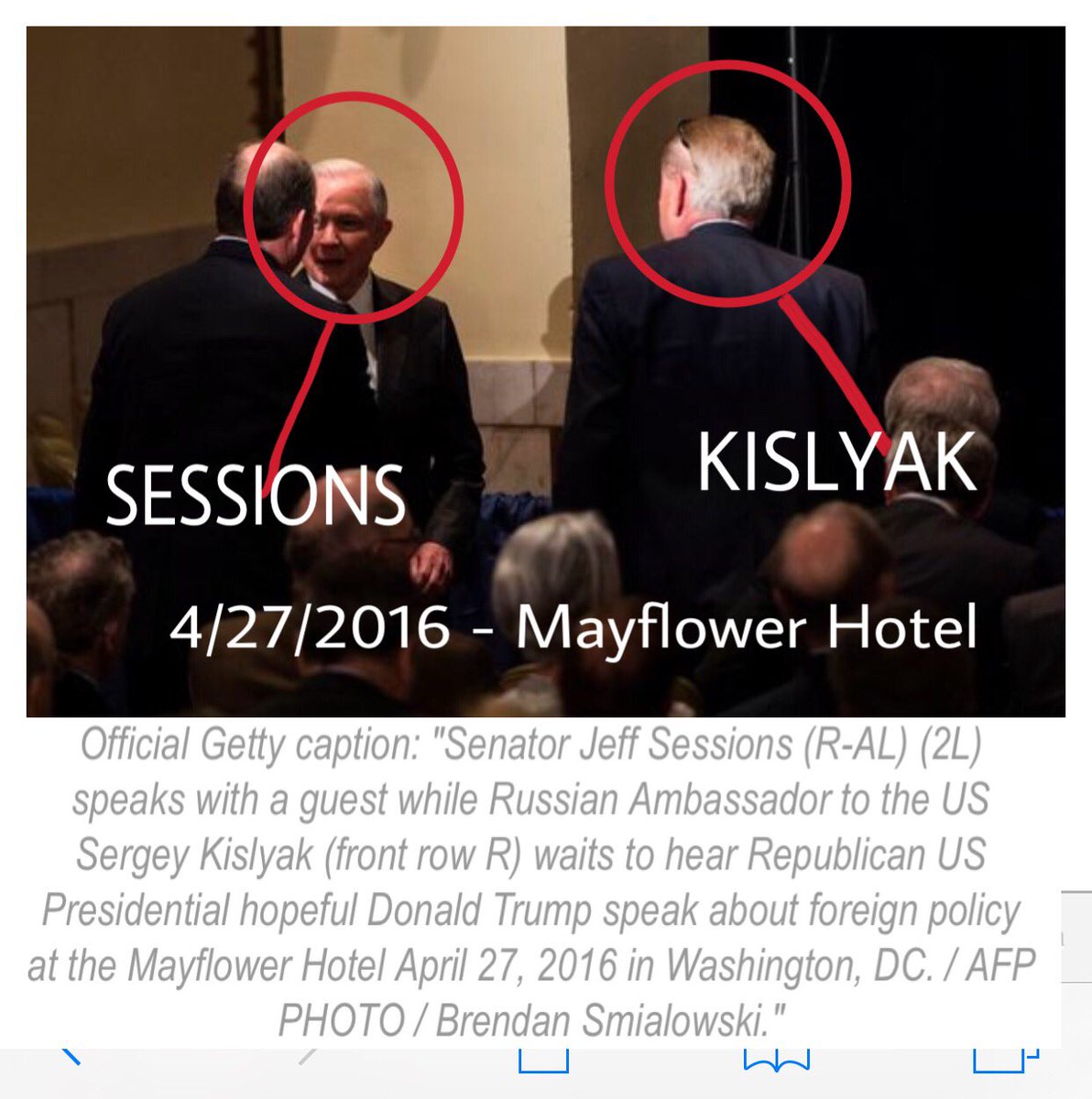 NOW...exactly one week later, communcation begins between Trump servers and AlfaBank/Spectrum Health. FIRST a bit ABOUT all that:

The FBI is examining why a computer server for a Russian bank led by oligarchs with close ties to Russian President Vladimir Putin had a disproportionate interest in reaching a server used by the Trump Organization during the US presidential campaign.

An INTERESTING tidbit is that Spectrum Health was ALSO involved in this...


What happened?
The Alfa Bank server repeatedly looked up the DNS address for the Trump server, which CNN compares to "looking up someone's phone number" and notes that it "indicates an intention to communicate."

A wrinkle:
Alfa Bank made up 80% of the DNS lookups to the Trump server, but another 19% came from Spectrum Health, a company owned by the husband of Betsy DeVos.

What's the explanation?
Well, no one seems to know. It could have been spam emails gone wrong or a case of technological mistaken identity. Alfa Bank denied any connections to Trump, and Spectrum Health said it had not been contacted by the FBI or any government agency.

Summing it up:
A cybersecurity expert on the communications between Trump, Alfa Bank, and Spectrum Health told CNN, "There is some sort of connection I can't explain, and only they are doing it. It could be completely innocent."

One THEORY is that something like THIS was going on: 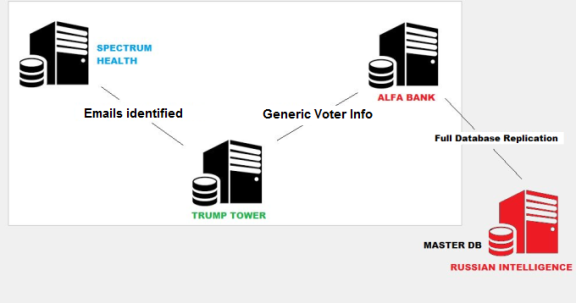 ...computers used a technique called data replication to transmit updates to databases on all three servers to keep data targeting information on all three servers current. He speculates that the information originally came from Russian intelligence, which used information from their database hacks, and was routed through the Alfa Bank server to launder it and then to the Trump tower server. This may be where Jared Kushner’s super stealth data base originated that he used to power his algorithms that he used so well in the election. It seems like the Spectrum Health (DeVos) server had a more limited database.

Now we have the FAMOUS Trump Jr. meeting. News today out of the AP is CLAIMING something WAS brought by Veselnitskaya to the meeting:

During the meeting, Akhmetshin said Veselnitskaya brought with her a plastic folder with printed-out documents that detailed what she believed was the flow of illicit funds to the Democratic National Committee. Veselnitskaya presented the contents of the documents to the Trump associates and suggested that making the information public could help the Trump campaign, he said.

LINK
Now...REMEMBER, that was on June 9th.

What about those Trump servers/Alfa Bank?

OH! They were "working" all right -- Right UP TO and ON the day of the meeting:

Now, we KNOW that ROB GOLDSTONE used Facebook to check in at Trump Tower the DAY of the meeting as well. Rob is the guy who EMAILED Trump Jr. setting this all into motion...

Notice the TIME STAMPS of the comments? The first one is 14:11 ... that's about 26 minutes AFTER the Trump-Alfa servers talked. We don't know exactly when Rob "checked in" ... but it's safe to assume comments would have started WITHIN an hour of posting to FaceBook.

Traffic between Trump/Alfa servers began a WEEK after the Mayflower meeting and PICKED UP in frequency up to -- and ON the day of the June 9th meeting. It continued with more frequency in the DAYS/MONTHS thereafter.

reaching FOR those StRaWs "I SEE".

Straws?? Rather it is the wooden planks in the trump grandstand that are burning. OP offered a good account with all the links necessary to demonstrate at least a plausibility that should be looked at.

Yes please uncover more and follow the trail of breadcrumbs. I'll just sit here and wait for your inevitable thread about your holy # moment and after it dawned on you we will welcome you with open arms. Best timeline ever.


White House Anon was right. They swallowed the bait without thinking where this will lead them to.

Oh come on..... you left out the neo-Confederate, Ku Klux Klan, and the Nazi data!

posted on Jul, 14 2017 @ 07:47 PM
link
back in the day i remember alex jones types with vast flow charts explaining bush's links to the new world order or illuminati depending on what day of the week it was.
evil jews like goldman sachs were looking to rule the world, this was even under obama.

trump has, in under six months managed to kill the new world order and illuminati theories by installing goldman sachs owners into positions of power in his own cabinet.
where are the alex jones types now?
how come the enemy switched from mythical organizations secretly controlling the world to everything being great and the problem lays at the feet of news stations? 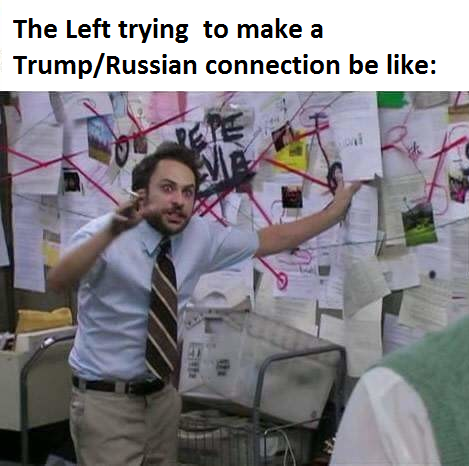 Can someone please explain why the left is so Russiaphobic? Why not work with and be at peace with a nation the size of Russia that has the capability of nuking us back to the stone age? Why poke that bear and put our entire nation at risk all because of personal butthurt and dislike of a single person.

Why not work together for the benefit of all?

Perfect thread to lay out a conspiracy. Here are some items I found recently and wanted to share with you here. A read of them beyond my limited quotes would be best. And these digital connections to Russia have been/are part of Washington investigations into foreign meddling in US elections.

(When reached for comment, Facebook said that it has found no evidence of Russian entities buying ads during the election. If true, that would imply that Russians spread their propaganda the old-fashioned way—by creating viral content that Facebook users were compelled to share, without engaging in any demographic targeting.)
....
Parscale, for one, maintains he’s “unaware of any Russian involvement in the digital and data operations.” That may be. But that wouldn’t preclude other members of Trump’s inner circle who had access to the digital and data team’s insights—including Kushner—from transferring that knowledge to a Russian operative during one of the undisclosed meetings he had with them during the campaign.

[I]mmediately after the Indiana primary, Giles Parscale began integrating Cambridge Analytica data and started its growth from a two-person DIY operation with no data mining or politics experience to a 100 person big-data-driven election-winning machine:

You might remember that Mikhail Fridman is the head of Alfa Bank.

Trump, once a data skeptic, spending millions on data

His campaign spent $11 million — almost one-third of its budget — on Parscale’s firm Giles-Parscale in August, a 60 percent leap from its July payments. The Texas firm has dozens of employees working to produce and disseminate Trump content and purchases all of Trump’s digital ads, in addition to handling online fundraising.

In August and July, the campaign paid Cambridge Analytica $350,000 for data. The firm, funded in part by Trump supporter and billionaire financier Robert Mercer, pairs its vault of consumer data with voter information.

And look who was at Trump Tower June-8-16 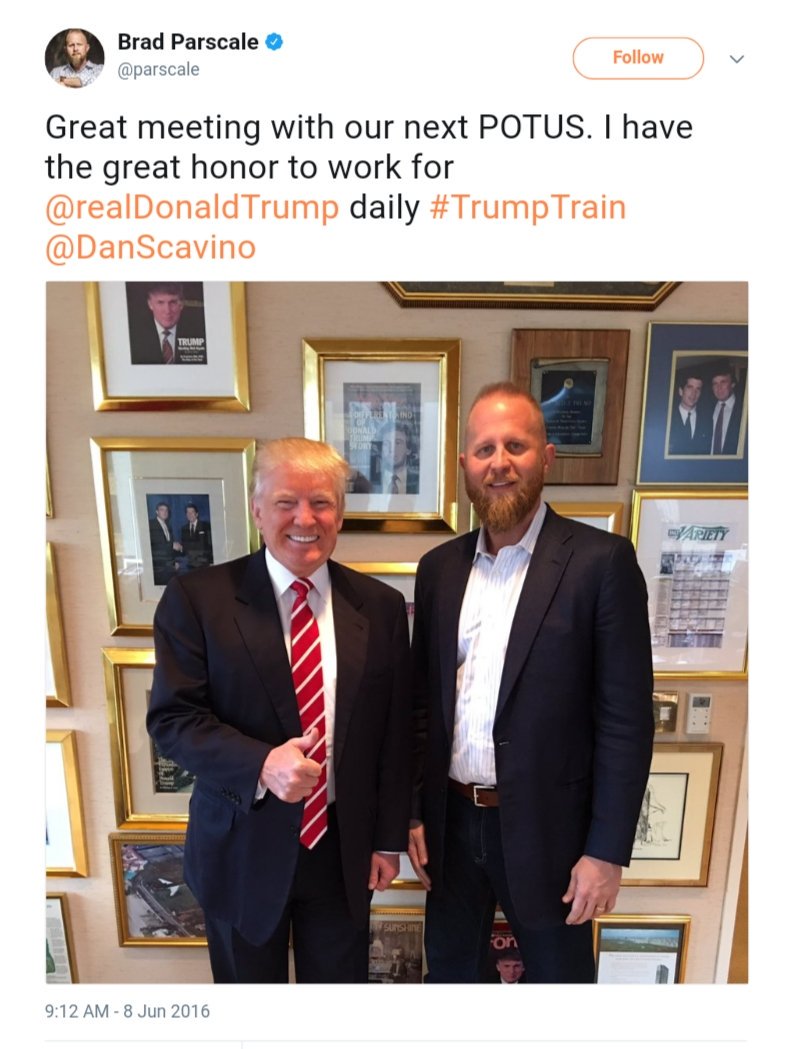