THE REAL TRIGGERING: How the Hyperventilating Left Lives in Denial

I agree with much you say. My first choice was Bernie also. But, I don't believe Bernie could have won the bible belt states.

If Bernie had won the primaries, then it would have been just another made up scandal about Bernie. The Russians would release some email connecting him to pedophiles in a pizza parlor. And the same voters that fell for the lies, would do it all over again with Bernie.


originally posted by: MOMof3
The rural dwellers of evangelicals and white separatists are a large electorate who came together of one mind.


Actually these "rural dwellers" were sick of having their quality of life eroded by a bunch of people in DC and being disregarded and marginalized by people such as yourself. But go ahead and continue to tell yourself you're on the side of moral justice by panting 1/3 of the nation as racist bigots.

Sometimes I think you god-less atheistic urban dwellers just need to have your precious electricity turned off for 72 hours to gain some semblance of reality.

Separatists are not just about race. Rural people live outside cities for a common reason. Since the railroad and manufacturers have abandoned the rural counties, schools and businesses close, they have to blame someone. But their hope rests on Trump now. 80 percent evangelicals and 90 per cent counties put their faith in his promises. I live in rural Idaho.

Mr. Putin personally called me and gave me the run down of all the fun things that The Donald(his words) is going to do, he even had a driver come over and pick me up and take me to the polls.
edit on 15-7-2017 by torok67 because: funky spacebar

originally posted by: Outlier13
a reply to: redtic

Please read the OP again. The premise is simple. Hillary was unlikable and therefore lost. There never was Russian influence which is what the left wants to make everyone believe.

You can't possibly know that, you are only trying to convince yourself otherwise. I mean.. not the Hillary bit.. she is not very likable.

But the investigation has just begun. When Trump and Co. say "pfft there was no dealings of any kind with the Russians," and then they dig up a meeting with Trump Jr. and a Russian lawyer.. which more info seems to be leaking out about every day.. clearly there is more there than meets the eye.

It may well lead to nothing at all. Which is fine. But unless you are somehow connected to the alphabet agencies and we don't know it, you can't possibly know how the investigation will play out. Did you know about the Russian meeting before it went public? Nope.. so obviously you don't know it all, stop acting like you do. If nothing happened, nothing happened. But clearly more happened than they have admitted to.

Bottom line is the Dems have to find something that proves Trump cheated his way into the White House. In their smug superior minds there is no possible way he could have won fair and square. Their egos quite literally can't handle it. That's why they'll never stop - not for their own good or the good of the country. This crap (in one form or another) is here to stay, probably until Trump finishes his second term or longer.

The left has short term memory loss but I love how the left is continually changing the narrative. Just because I have friends who are Russian does that make me someone who colludes with the Russian government? Remember this entire narrative has always been that the Russians influenced the US elections and swayed US voters away from Hillary Clinton toward Donald Trump. But the left will change the narrative until something fits so they can all scream, "See, we told you so!"

This investigation will turn up absolutely nothing that even comes close to collusion.

You're exactly right. This will never go away until they find some distant connection way down the line where they feebly attempt to draw some half baked correlation of events that will never hold water but will be the impetus for their brain washed ANTIFA goons justification to continue to act like fcking idiots.

originally posted by: Perfectenemy
a reply to: Outlier13

I will not comment any further in this thread. (

So we can hold you to that? It's good to know there are some people out there who are honest.

Right. Shes so disliked that, at one of her campaigns, she had Jay Z and Beyonce there, and still very few decided to show up. She actually scared their fans away.

posted on Jul, 16 2017 @ 07:57 AM
link
Just another thread where people can't tell the difference between liberals and the left.

It's like cooking a meal and not knowing the difference between a steak and a potato.

edit on 16-7-2017 by Whodathunkdatcheese because: (no reason given)

originally posted by: Outlier13
EDIT: If you truly believe Russia influenced US voters then YOU were influenced by Russia. If you say you were not influenced by Russia then consider your logic borders becoming a logical fallacy. Please point to the information you personally consumed that Russia propagated in order to sway your vote.

Here's the truth. The people HATED Crooked Hillary. She was unlikable. Period. What does it say with all of your hatred and disdain you have for Trump over the many ill perceived personality flaws you see in him that HE was able to beat Crooked Hillary? Think about it for a second. How hated and reviled was Crooked Hillary that Trump beat her?

Just for fun I like to go back and watch how pompous and assuming she was in the first democratic debate. In her mind she had already picked the color of the curtains in the Oval Office. Or the time on 60 Minutes when Barrack Hussein Obama said, "One thing I can tell you is Donald Trump will not be the next president of the United States".

You are in for a very....very....very long 8 years. Trump will be reelected POTUS.

No amount of your hyperventilating fake news and deplorable (lol) attempts to connect non-existent dots will ever change the fact that the Russians never had ANY influence in our election process. 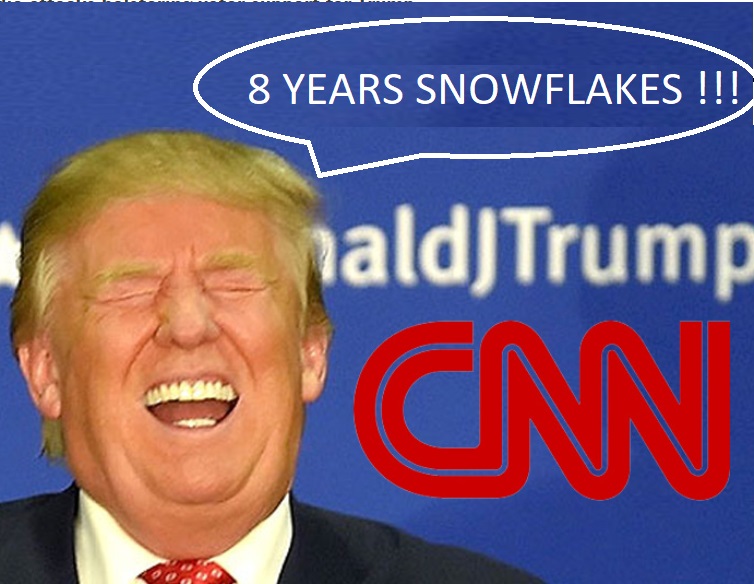 Credit to Antipathy17 for illustrating the fact what liberals should truly be focused on is how Hillary blatantly stole the democratic nomination from Bernie Sanders instead of continuing to chase a 100% false Russia narrative.


Actually 3 million more people loved Hillary than Trump or do you not remember that?

ergo you must be from the alt right.

hi
i am from the left i want to talk you out of narrow minded views and introduce you to a bigger world.

Trump's right about one thing though- he could shoot someone in the middle of Fifth Avenue and not lose most of his support. 45% say they would still approve of him even if he shot someone to 29% who say they would disapprove, and 26% who aren't sure one way or the other.

Thanks for proving my point. Ironic how someone so supposedly popular still managed to lose the election. So I call BS on your popular vote argument. I will never believe the popular vote numbers especially since recounts were actually showing Trump ahead even in the pop count numbers before they stopped the recount.