posted on Jul, 12 2017 @ 11:50 PM
link
I came across this from Dabo seven, which shows a Martian base on official Google Mars, If its a joke whats it still doing there,It looks pretty good with solar arrays and sat. disk. In fact its just what a base should be. About eleven minutes into the vid.

Does it look authentic mars quality?!!

Did you take a look for yourself first hand? And not just trust some YouTuber?

If its a joke whats it still doing there,It looks pretty good with solar arrays and sat

No disrespect but common sense and a mental age of a 7 year old will answer this question for you..

Isn't it the Google Data Center in The Dalles, Oregon with rearranged buildings?

originally posted by: trollz
I just looked and it's definitely not there on mine.

It was already decimated, they go that quick in a thin atmosphere.

Hoax. The pickup truck in the parking lot of the lower left building kind of gives it away.
Also exhaust fans? Exhausting what?
edit on 7/13/2017 by Wreckclues because: (no reason given)

Electric lines are drawn in, to straight, no shadow, particular lack of dust on the very white buildings, no tracks from the pickup, must be a hover pickup...

Good Eye, right down to the same pickup truck in the driveway 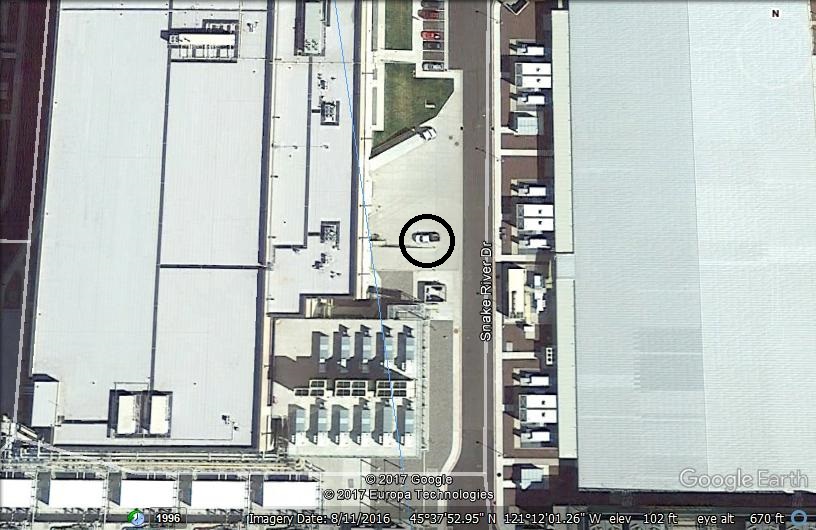 Thanks for sharing that as I'm having issues with this devices screen cap.

I read it was made as an April's fool. No, sadly I don't have the link.

originally posted by: lamphead444
Maybe they photo shopped the cars in! Lmaooo a reply to: Wreckclues

uhm good find ... Sorry its just hard to get ten post when i am just not carrying

If its a joke whats it still doing there,It looks pretty good with solar arrays and sat. disk. In fact its just what a base should be. About eleven minutes into the vid.

It was an April Fools day joke by Google. It's really a picture of some of their data center located here on Earth -- in Oregon -- with the campus buildings rearranged:


So, yeah -- To answer your question "If its a joke, what's it still doing there", it IS a joke, and it is NOT still there on the Google Mars imagery.

You could have just looked for yourself on Google Mars to see that it was not still there, instead of blindly believing the guy in the YouTube who says it's there.